Posted on Nov 9, 2021 by Will Nott
Posted in News, under Global.
Tagged with Adventus Drive, Adventus.io, international student recruitment.
Bookmark the permalink.

Since March 2021, applications for Australian institutions from international students have dropped 51%

Adventus Drive gives institutions personalised and real-time data on the international student market, which the company says provides them with “full control to influence every stage” of the prospective student funnel.

Adventus.io is a SaaS-based student recruitment platform, which has raised millions (USD$22m to date) in investment. The company currently has more than 4,000 agents on the platform and recorded over 800,000 searches conducted on the marketplace.

“Our marketplace is directly being engaged by recruiters, students, and often parents, literally making an important decision about their educational future,” said Adventus.io co-founder and CEO Ryan Trainor.

“So while institutions traditionally invest in top-of-the-funnel activities like Facebook and Google advertising, and mid-funnel ventures like expos and open days, they’ve never had the ability to influence a captive audience at the end of the funnel until now.”

“By connecting all the data sources in one platform, institutions can not only digitise the process but better understand recruitment agent performance”

It will help institutions better understand who their prospective students are and better diversify the student body with detailed student profiling including breaking down leads by age, gender, source country and application status.

“Until now, the student recruitment sector has been highly fragmented. By connecting all the data sources in one platform, institutions can not only digitise the process but better understand recruitment agent performance, understand where their student volume is coming from, who has the most successful applicants, and which regions are performing the best,” said Trainor.

The platform enables institutions to compare their performance to others so they can see where they are excelling and where growth opportunities exist.

Institutions can also gain access to “intelligent tools” to influence the network of recruitment agents on the marketplace, efficiently and at scale in order to maximise relevant applications from key and emerging source markets.

“Seamlessly connecting institutions, education agents, and adjacent services to be able to find and transact with each other, without bias, is helping to democratise access to all universities for the agent and reduces the bias in the system so students can access more course inventory from more institutions,” Trainor added. 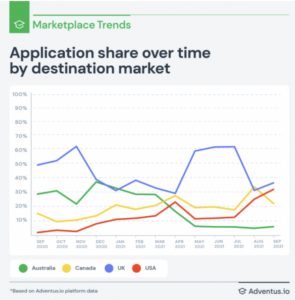 The company has used data to provide insights into the international education sector at large. It recently found that since March 2021, applications for Australian institutions from international students have dropped 51%. In the same period, Canada grew 148%, UK grew 150% and the US grew 422%.

“With prolonged border closures and uncertainty, Australian institutions are missing out on the increasing demand from international students to secure a quality education. Universities across the US, UK and Canada are benefiting from Australia being taken out of the mix and seeing a significant surge in international student applications,” Trainor said.

According to Adventus.io data, US institutions have experienced the quickest recovery surpassing Canada and Australia as the second most popular destination for international students.

With comparatively open borders, the UK consistently remained the top destination market for international students according to Adventus.io.