Posted on Sep 10, 2018 by Anton Crace
Posted in News, under Global.
Tagged with Daughters For Life, Global, IES Abroad, The PIEoneer Awards.
Bookmark the permalink.

2018 PIEoneer of the Year is charity organisation Daughters for Life

The event, which attracted 350 attendees from around the world, saw winners from ten regions and countries recognised for their achievements in areas including championing diversity (Global Leader Experience Abroad), increasing access to education (Daughters for Life) and digital innovation (Study Portals).

Amy Baker, The PIE’s managing director, said she was delighted by the response to the PIEoneers, which grew to fifteen categories for the 2018 event.

In a surprise twist, the international alumni award was shared by two graduates from UK institutions.

Liu Daming, an award-winning author who became the first Chinese student in a wheelchair to study in the UK, was recognised for his inspiring story.

“An inspiring story of a young man who followed his dreams in spite of many obstacles,” said one judge.

Co-founder of Student Circus, an online platform to connect international graduates with Tier-2 employers, India’s Tripti Maheshwari also received alumni of the year for her work in the employability space.

“What is most impressive about this nomination is not the success of one individual, but many successes of others due to the actions of that individual,” said the PIEoneer judges.

Winner of the event’s namesake award, the 2018 PIEoneer of the Year was charity organisation Daughters for Life, which works to increase access to overseas education for women in the Middle East.

Established by Dr Izzeldin Abuelaish in honour of his daughters and niece who were killed in an Israeli tank strike, DfL aims to bring peace to the Middle East through education and has helped almost 400 women study abroad. 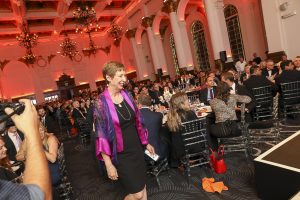 Mary Dwyer was in London to collect her award for Outstanding Contribution to the industry. Photo: Roger Harris Photography

Outstanding contribution to the industry winner, Dr Mary M. Dwyer, used her speech to promote the importance of outbound education in an increasingly volatile political climate.

Dwyer, who has overseen a sixfold increase in the number of students sent abroad by her organisation IES Abroad to over 9,000 students, added there were significant benefits to be had in ensuring overseas experiences were open to all students, regardless of background.

“We spend a lot of time, and energy, and resources on helping students from underrepresented [groups]. I think it’s really important that we continue all to really commit ourselves to diversifying our student bodies because everyone benefits from that.”

The after-party, held downstairs at 8 Northumberland Avenue, saw the winners and those shortlisted celebrate their achievements with industry representatives well into the small hours of morning.

You can see more pictures from the event here.