Posted on Feb 10, 2020 by Kerrie Kennedy
Posted in News, under Europe.
Tagged with Erasmus, European Commission.
Bookmark the permalink.

Over the last three decades, more than 10 million people have participated in a potentially life-changing Erasmus+ experience, with some 470,000 students, trainees and staff spending a period abroad during the 2017/2018 academic year alone, a new European Commission report has revealed.

More than 530,000 people have benefitted from online language training since 2014

The Erasmus+ Annual Report 2018, which covers the fifth year of the European Union’s flagship Erasmus+ program, highlighted “yet another record year” in 2018, with a budget of €2.8 billion marking a 10% funding increase compared to 2017.

“[Erasmus+] is one of the EU’s most tangible achievements”

According to the report, in 2018 Erasmus+ funded more than 23,500 projects and overall, it supported the mobility of over 850,000 students, apprentices, teachers, and youth workers.

“Nearly 10% of the 470,000 students, trainees, and staff in higher education who received a grant during the 2017/2018 academic year, travelled to and from partner countries across the world,” the report read.

The report also noted that work on the digitalisation of administrative processes associated with Erasmus+, in particular regarding higher education, also continued throughout 2018.

The Erasmus+ Mobile App  – described as a “digital one-stop-shop for students” – provides a range of services that eased student’s periods of mobility, such as allowing them to sign learning agreements online and access Erasmus+ Online Linguistic Support, an online language course in 24 EU languages.

“Students and other Erasmus+ participants have downloaded and installed the Erasmus+ mobile app more than 73,000 times since its launch in mid-2017,” the report explained.

“More than 530,000 people have benefitted from online language training since 2014, among them almost 8,000 newly arrived refugees.”

In May 2018, the Commission presented its proposal for an ambitious new Erasmus program, seeking to double the budget to €30 billion in the EU’s next long-term budget for the period 2021-2027.

Speaking at the opening of a stakeholder event on the new Erasmus+ program, commissioner for Innovation, Research, Culture, Education and Youth, Mariya Gabriel, said it has become “a gateway to Europe and to the world” for younger generations.

It is “one of the EU’s most tangible achievements: uniting people across the continent, creating a sense of belonging and solidarity, raising qualifications, and improving the prospects of participants,” Gabriel added. 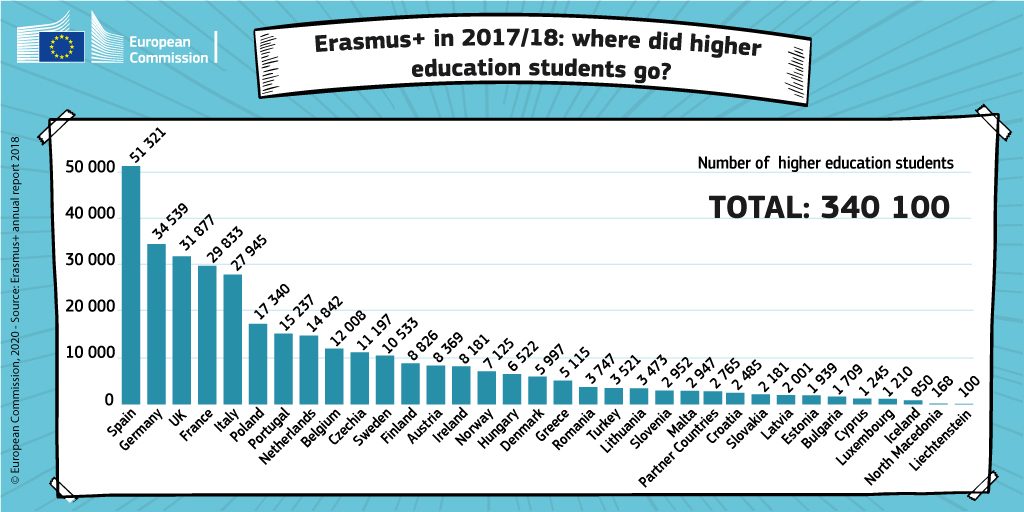 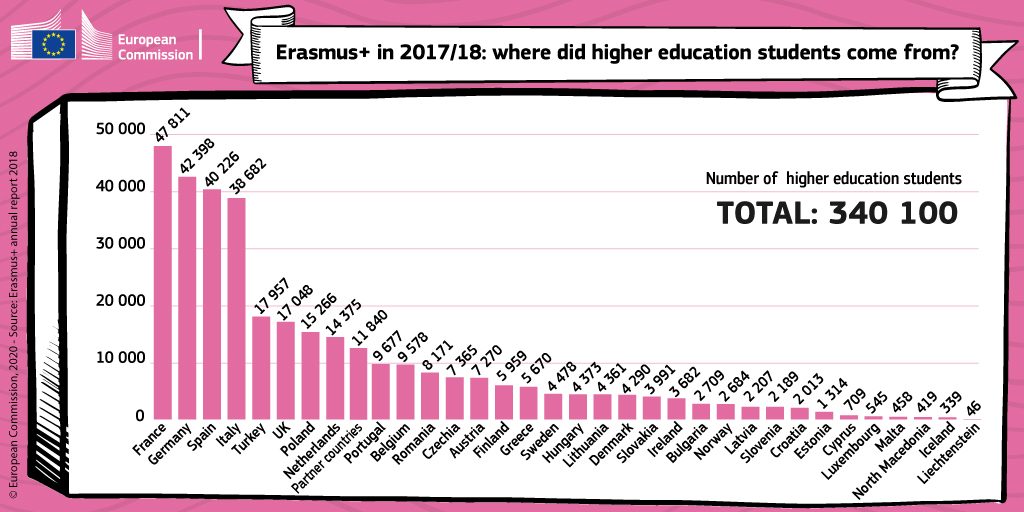 Despite the popularity of the UK as an Erasmus+ destination – and the number six HE student sending country in 2017/18 – the country’s future participation in the program was called into question earlier this month when members of the UK parliament voted against a clause that would have required the government to seek to negotiate continuing full membership of the program.

But while prime minister Boris Johnson has downplayed fears, stating that “there is no threat to the Erasmus scheme”, the University Council of Modern Languages has highlighted that some UK universities have made financial guarantees to reassure worried students and European partners.

According to a report by The Guardian, Newcastle University has earmarked £1.4 million to underwrite Erasmus+ exchanges for the 400 students who will study abroad during the 2020/21 academic year, and said it will continue to receive European students in that year regardless of what happens politically.

Vivienne Stern, director of Universities UK said that without continued access to the Erasmus+ program, 17,500 students a year could lose out on the opportunity to gain international experience.

“Because Erasmus+ placements are funded, the students who stand to lose the most are those who cannot afford to travel without financial support,” she added.