Posted on Apr 20, 2018 by Chris Parr
Posted in Analysis, under Asia.
Tagged with China, Student mobility.
Bookmark the permalink.

Mainland China has long been known as something of a student departure lounge. Between 1978 and 2016, it is estimated that more than 4.5 million Chinese studied outside their home country, to the huge cultural and financial benefit of the universities in the US, the UK, Australia, Canada and beyond.

It is well on course to meet its self-imposed target of hosting 500,000 international students by 2020

It has not always been a two-way street. According to The New York Times, just 20 years ago there were only 3.4 million students studying in China.

Today, however, it is thought that more than 26 million people are enrolled in Chinese universities, and nearly 490,000 of them are from overseas.

Times, it seems, are changing. China wants to be seen as a premier higher education destination – and some would argue it already is.

Indeed, the country is now behind only the US and the UK in terms of the total number of international students on its campuses, and has been for several years.

It is well on course to meet its self-imposed target of hosting 500,000 international students by 2020 – a figure that, based on current numbers, would see it leapfrog the UK in that particular league table.

“Last year we had the highest number of international students we have had over the last five years,” says Iris Yuan, director of international affairs at The Sino-British College, an international university college established by the University of Shanghai for Science and Technology and nine British universities.

“International student numbers have increased 45% in that time, [and] here is the rationale. China wants to be seen as a major player internationally in terms of higher education. The government wants to boost the internationalisation for our universities as part of a ‘soft power’ policy to project China internationally.”

Source: Ministry of Education / Center for Strategic and International Studies

Much of this recent growth is arguably down to the One Belt One Road Initiative, one of the largest overseas investment drives ever launched.

It is, primarily, an infrastructure project. Some $900 billion has been allocated to initiatives that will boost both land (the ‘Belt’) and sea (the old ‘Silk Road’) trade routes which run West, to Europe, via Asia. China says its aim is to usher in a ‘new era of globalisation’ that will benefit not only itself, but all countries in the region.

“The One Belt, One Road strategy is aimed not only at strengthening exchanges between China and the rest of the world, but also at ensuring the development of Asia,” explains Yuan. “Education is the one of the most important aspects of this strategy.”

Wang Huiyao, founder and president of the Center for China and Globalization, an influential Beijing-based think-tank, agrees. “We are still lagging behind by the US on soft power,” he said at the launch of a CCG report on international student mobility earlier this year.

“There are more than 300 world leaders including presidents, prime ministers and ministers around the globe that graduated from US universities, but only a few foreign leaders that graduated from Chinese universities, so we still need to exercise effort to boost academic exchange and educate more political elites from other countries. The Belt and Road initiative is a good chance to achieve this goal.”

It appears to be paying off. The number of students heading to China from India, Indonesia, Laos, Pakistan and Thailand – all countries affected by the initiative – has increased more than 20% on average from 2016 to 2017.

The CCG speculates that because One Belt One Road has created jobs for people in these countries, local people are more motivated – and financially more able – to study in China.

However, it is not just countries along the Silk Road that China see as fertile ground for student recruitment. The number of China-based African students increased 26-fold to around 50,000 between 2003 and 2015, according to the Unesco Institute for Statistics. This puts China second only to France in terms of the number of students it attracts from the African continent.

Numbers from countries with more established and prestigious higher education systems are on the up too. There were twice as many US origin students studying in China in 2015 (12,790) compared to 2005 (6,391), for example, while the number of UK students studying there is reported to have tripled over the same period. One of the drivers of this rise has been a proliferation in courses taught in English.

The recruitment drive in the English-speaking world was evident at this year’s Student World exhibitions in the UK – recruitment fairs profiling study abroad opportunities. 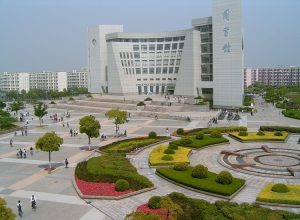 “There are so many misconceptions about studying in China”

The type of course that China’s international students are studying once they arrive in China is changing too. According to the Washington-based think tank, the Center for Strategic and International Studies, in 2016 more than 40% of foreign students in China are studying the Chinese language.

This figure represents a 15% drop compared with 2012. Conversely, the number of students on non-language courses is on the up, and the number of international PhD and Master’s students has jumped 49% and 28% respectively (see table).

Another reason for the soaring popularity of study in China is the number of scholarships on offer. In 2017, some 58,600 international students received a government scholarship compared to just 8,500 in 2006.

“There are so many misconceptions about studying in China,” says Richard Coward, chief executive of China Admissions, which assists international students wanting to study in China. “Things are changing so fast. You’ve really got to be here to see it.”

“Foreigners are coming to get a high-quality education at an affordable price… and more and more are taking full degrees, whereas before they were mostly on more short-term programmes. It is becoming a serious study destination.”

In addition to stepping up efforts to attract international students, China is also taking steps to encourage these students to remain in the country after graduation.

In 2017, the Ministry of Human Resources and Social Security decreed that international students who had obtained a master’s degree or above from a Chinese institution within the last year were eligible for work permits of up to five years. There are other examples too, such as the Science Innovation Center in Shanghai, which offers a two-year residence permit for international students who work or do an internship.

Why Chinese students are staying put

Although China remains the world’s top place of origin for international students, the increase in the number of Chinese opting to study abroad has been slowing in recent years. According to China’s Ministry of Education, in 2016 a total of 544,500 Chinese went abroad to study. Although this is 4% higher than 2015, the growth rate went down by about 10% on the previous year.

Between 2016 and 2017, the number of international students admitted to US higher education institutions fell by 3.7%, year on year, according to IIE, while in the UK, there was relative stability.

Security is one of the main concerns for Chinese students considering an international higher education. Specifically, the CCG cites the case of Yingying Zhang, a female Chinese student who disappeared in June 2017 in the US, as one high profile case that may have deterred a number of would-be overseas students.

Figures from China’s Ministry of Foreign Affairs show that between 2014 and 2016, the number of Chinese students overseas making requests for consular assistance leapt from 932 to more than 6,100 – another part of the narrative that might deter would-be international students from heading overseas.

Meanwhile, Donald Trump’s victory in the US presidential election, and the relatively conservative, inward-looking nature of his administration, may have acted as a deterrent. In fact, the number of US F1 visas issued to students from mainland China in 2016 was 148,000 –  drop of 46% when compared with the previous year. This drop continued in 2017, though was less steep.

In addition, the reputation of China’s own higher education institution is steadily rising. In 2015, China announced the “Double First-Class initiative”, which aims to increase the global standing of its higher education system.

By the end of 2049 – the 100-year anniversary of the establishment of the People’s Republic – China intends to have 42 “world class” universities.

This agenda, combined with the sheer number of Chinese students who have studied overseas, means the competitive advantage gained by having a foreign degree may not be as highly prized. 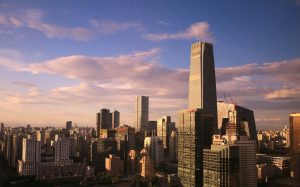 According to government data, 45% of returnees have a starting monthly salary of below 6,000 yuan ($910), and only about 6% can boast a monthly income of over 20,000 yuan. When the expenses of studying abroad are factored in, the attractiveness of international study may be understandably dampened.

“China is the future, and to study there means you can get a good degree for cheaper than the UK or the US”

As a departure lounge, then, China’s future seems less certain. While its young people are still heading to overseas universities in record numbers, the striking growth charts may tail off.

In arrivals, though, the future seems much clearer. From the very top of government, the intention is to push China as a destination for students, and to further its reputation for quality higher education.

“China is the future, and to study there means you can get a good degree for cheaper than the UK or the US, and also learn the language,” says Kate, a 16-year-old attending the Student World exhibition in London. “I’m seriously considering it.”

According to recent trends, she is most certainly not alone.

2 Responses to A two-way street: why China is not just a student departure lounge anymore