How can technology recruit harder for you? This was the question posed by the latest mega-webinar hosted by The PIE.

Questions remain about the traditional role of the international office

Edtech continues to dominate the headlines and it is clear that leaders in higher education are seeking an impartial view on navigating this new commercial frontier.

The webinar was a chance to hear from some of the leading private sector leaders, to connect the dots between the students, digital service providers and higher education institutions.

“We could see the explosion of companies in this space, and we could see the look of horror on PVCs’ faces” quipped David Pilsbury, former PVC International at Coventry University, currently chief development officer with Oxford International and co-chair of the panel along with The PIE’s Amy Baker.

“We recruit largely through agents, so [we’re] very keen to understand the role of AI and online activity”

Carthy, also chair of BUILA, noted, “We recruit largely through agents, so [we’re] very keen to understand the role of AI and online activity to support and enhance that, and the challenges of how we do that securely and safely.”

Between the elevator pitches, some clear themes emerged that could prove important. Covid has forced the change but India is fuelling the growth.

Don’t underestimate the importance of India

While Covid-19 has accelerated the pivot to online working, with Foster from AECC Global describing technology as set to “overtake the traditional drivers of recruitment” and having “supercharged” referral marketing – it is also clear that the scale of global applications is mainly driven by success in south Asia.

This must be the reality for the vast majority of universities and commercial platforms representing the big English-speaking study destinations. Pilsbury noted that “the massive growth in India” had “rescued the sector in the UK in the short term”.

Be it the hybrid online-offline local agent approach of AECC Global or the disruptive Leverage Edu creating mass content for a new generation of Indians, it is clear for all parties that this specific region is the rocket fuel for digital recruitment.

“India is welcoming a digital revolution with telecom providers making internet access cheap and accessible,” he said. “Students today are very more aware, more smarter about what they want to do.” 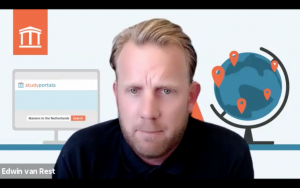 “Many providers are not active in Europe because of low institutional cost,” said Studyportal’s Edwin Van Rest

Studyportals and Keystone Education, both European heavyweights leveraging large online audiences are also looking to South Asia because of the potential gains. “Many providers are not active in Europe because of low institutional cost,” explained Van Rest, and “in China the internet operates in a very different way” and is harder to penetrate.

Institutions need to be cautious about what is being classed as ‘global’ success. This could just be majority growth in India and the surrounding region. The rising tide lifts all boats and it is clear that the commercial sector is riding this wave just like the rest of us.

There was much talk about the top of the funnel, with AI innovations designed to draw in broad audiences at the very early stage of their interest in studying abroad.

THE Student boasts the ability to attract interest from affluent students through the Times Higher Rankings, with less than 5% of enquiries having enlisted the help of an agent at the point of contact, Hayes asserted.

Keystone Education generates 110 million views a year across a ‘house of brands’ – more than 460 websites that include sites like findamasters.com in their stable. Studyportals curates many organic forums from PhD studentships to specific study destinations that enable it to track engagement and predict retention and popular opinion.

“Our admissions teams are at capacity, we are looking for quality not quantity”

“Our admissions teams are at capacity,” commented one of the HEI audience members, “we are looking for quality not quantity”.

This was a point echoed by Carthy at Northumbria University who described the constant juggling act of admissions and recruitment teams, balancing risk, institutional control, resources and student-centric services all in a sustainable way. Remember this is a “big ticket purchase” where universities need to build lasting quality to succeed.

Lead generation funnels however, have an alternative value these days. Big data

Lead acquisition can be repositioned as high-value market insight with millions of data reference points that can reflect changing opinions and student behaviour in real time.

Harrell from Keystone Education, was quick to explain his vision of the future value of technology; “The big trend that I can see is in curriculum development. Leveraging our data to help universities make better decisions.”

A sentiment shared by van Rest, “to serve the student well you need the best data”.

“We have by far the most data in the world about the student experience,” he said. “The biggest marketing investment (universities could make) is investment in the product.”

A good proposition is not enough. The legacy of trust between local agents and universities may be proving hard to build quickly with digital platforms.

There is a frantic undertone to the debate that hints at how competitive the commercial sector is. The emphasis is on hyper-growth, hyper-personalisation, less friction in the process. This is a high-speed train leaving the station so you had better jump onboard or be left behind.

The process of portfolio development, international partnerships and digital innovation are slow-moving beasts in the public sector and can be a frustrating partner for their commercial counterparts.

“We’re waiting to see what’s working and what isn’t, so we can see through the hype,” commented Carthy. “Universities need to have a clear mission of who they want to recruit and why.”

There is a gap in the pitches to universities around how they understand each university’s USP, it was suggested.

In a student-centric online world, one audience member asked, how do platforms make each university proposition unique?

The answer was interesting – it’s up for universities to work collaboratively and know who they want to recruit and why.

“You have to understand what works for students and parents today. If a university offer resonates with students they will succeed,” explained Chaturvedi. “This is about achieving best fit and higher retention rates,” agreed van Rest.

What’s also interesting about this new school of commercial players is that they don’t actually have to rely on university partnerships any more.

The global study abroad product is so well established there is plenty of business collaboration with other commercial providers and the students themselves without needing a direct agreement with institutions.

Hayes explained THE Student’s business model is to offer each student a personalised choice rather than a list of the best institutions in the world resulting in their own commercial partnership ecosystem to maximise choice, “including plugging into a range of businesses such as Studyportals, SI-UK and ApplyBoard on the student counselling side”.

“We are not trying to do it all ourselves, that would be a recipe for failure,” explained Hayes, also demonstrating how easy it is to create a commercial partnership with master agents rather than directly with universities.

“We are not trying to do it all ourselves, that would be a recipe for failure”

Similarly, Leverage has created an alternative way to monetise its large application base through fintech products such as affordable loans and money transfer options alongside an agent network management tool via its UniValley brand.

Questions remain about the traditional role of the international office.

No doubt a topic for another mega-webinar in the near future but it is clear that the traditional international office strategy is drifting.

International recruitment teams are experiencing an identity crisis and considerations need to be made about who the external face of a university should be. 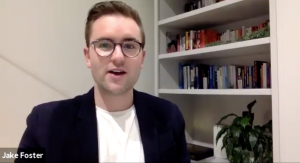 Harrell was also quick to remind the audience about Keystone Recruit, a fully outsourced solution for lead qualifying and applications processing, should universities be looking for additional resources in the future.

From graduate employability metrics to cost per acquisition there are still more questions to be answered but technology is undoubtedly going to play a central role in international student recruitment moving forward.

You can still register to watch the replay of The PIE presents Student Recruitment 4.0 – #2 – Recruit Harder by clicking here.

2 Responses to How can technology recruit harder for you? Student search platforms attempt to answer