Posted on Oct 27, 2017 by Natalie Marsh
Posted in Analysis, under .
Tagged with fintech, technology.
Bookmark the permalink.

As fintech innovations spread across the globe, our way of life is changing. Buying a morning coffee with a wave of your watch, converting foreign currency online and sending money to someone on the other side of the world are all transactions that have become simple and routine thanks to developments in financial technology.

And international education is becoming one of the many global industries benefitting from these new products. As a result, the bumps in the road for students on their overseas education journey are gradually smoothing out.

What is fintech?
Though fintech can take many forms, “I think the disruption is really in the payer experience,” says Sharon Butler, EVP, education at Flywire, a global payment solutions company. “Essentially we are leveraging banking infrastructure. I think really what fintech is, is sort of the blend of the old and the new.”

Preceding the growth in cross-border tuition fee payment services, which track the money and file it instantly with minimum costs involved, were more staff resources sifting through multiple transactions and matching them to the student, coupled with uncertainty from the student’s side about when or whether the money would actually have arrived.

“Essentially what we’re doing is leveraging this global collection network, where it’s made up of hundreds of banks and partners that are specific to those countries, in order to give that student an incredibly good payment experience with transparency and cost and methods,” Butler says.

The sheer size of international education means that it “lends itself to numerous and complicated processes”, says Mark Fletcher, CEO of Cohort Solutions, which provides a range of services to solve inefficiencies in the international payment market.

Through the uptake in fintech, “education providers increase productivity and improve the management of inbound and outbound international payments such as student tuition fees, agent commissions, refunds and other offshore supplier invoices,” he says.

Improvements in payment services is one of the biggest ways fintech has benefitted students, agrees Devie Mohan, founder of fintech research company, Burnmark.

“One reason that banks never focus on students as a segment is that they’re not a highly profitable segment, but for fintech, this is a huge segment in itself,” she says. Long-established financial companies are harnessing both fintech and students’ specific financial needs, and are evolving to serve this receptive market.

Fertile ground in China
Financial technology as an industry has grown globally at an unprecedented scale. Last year, fintech reaped $17.4 billion of venture capital investment – a colossal increase on the $2.5 billion it received just four years ago.

And $7.7 billion of this investment went to China, seeing it overtake the US as the top investment market for fintech companies for the first time.

A platform targeting the Chinese market has recently struck a deal to partner with ChinaPay, the online payment subsidiary of China UnionPay, one of the world’s payment giants.

Superlinkplus, which facilitates interaction and cooperation between overseas recruitment agencies and universities, will harness the technology behind ChinaPay for its Superyou arm used by students to research universities overseas, to overcome some of the barriers associated with traditional tuition fee payments.

“We understand that by putting together the education resources and also the Superlinkplus platform, with the very mature ready-for-use tech and financial background of UnionPay, this could actually offer students and universities great and very efficient solutions for tuition fee payment,” says Shi Yi, vice president at Superlinkplus.

The Superyou platform is for use on mobile devices as the growth in mobile technology in China “is overwhelming!” says Yi. “In the period of maybe one year, mobile payments have become the dominant way of payment in daily life,” he explains.

The mobile payment industry is one which has grown particularly quickly in China in comparison with other countries around the world, predominantly led by Alipay and WeChat Pay. These two platforms combined saw $2.9 trillion in transactions overall last year.

“It is a kind of a cashless world in China,” echoes Sunny Sun, managing director of the myMoney platform, which allows students to pay their tuition fees securely across borders online with the click of a button. “We use WeChat Pay to pay for everything: daily groceries, taxis, cinema tickets…”

A partner of university placement and visa services company, UVIC, myMoney is a service established for Chinese students with the aim of making the university application process easier. And although available on a laptop or PC rather than on mobile devices, myMoney has also incorporated WeChat Pay into its platform, giving Chinese students another payment option familiar to them. 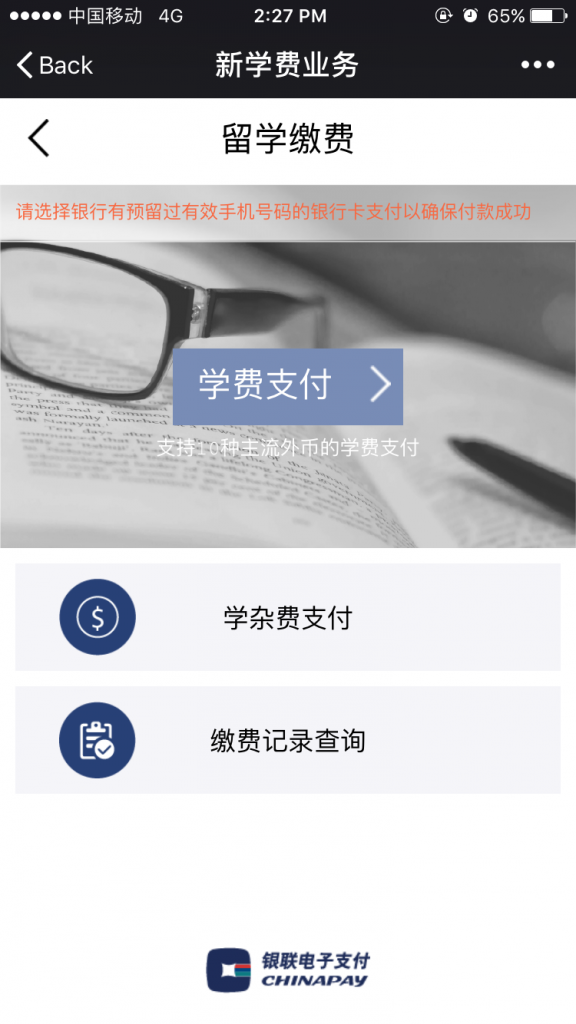 Notably, in July this year, China updated its regulations on the amount of currency permitted to be sent overseas at any one time. Citizens have been allowed to transfer the equivalent of up to $50,000 a year – an amount that remains unchanged – but new regulations outline that any single transaction exceeding $10,000 will be monitored and must be reported.

“We have a team to make sure every single payment is compliant with Chinese regulations.”

This form of money has proliferated with close to 800 cryptocurrencies now on the market – the most prevalent of which is bitcoin, created in 2009. It now has a market cap of over $57 billion.

With the value of one bitcoin pricing at over $3,000 at the time of print, it may seem like a currency isolated in its own online silo. But with the expansion of ewallets, and bitcoin ATMs popping up around the globe, units of this digital currency can be transferred instantly from person to person, at a $3 transaction fee.

There are now 800 cryptocurrencies now on the market

This, according to Roger Ver, the world’s earliest investor in bitcoin startups and CEO of Bitcoin.com, can carry enormous benefits for international students studying overseas. “You don’t have to bother dealing with setting up a bank account,” he says, which can sometimes be a challenge if the student is not a long-term resident or whose home country is under international financial sanctions.

Some educational institutions are even accepting these cryptocurrencies for tuition payments.

The University of Nicosia in Cyprus was the first accredited university to do this, and 45% of all students on the online MSc Digital Currency course pay for their fees in bitcoin – the course is set to enrol upwards of 1,500 students in the September 2017 intake.

Cinta Bahasa, an Indonesian language school based in Bali, is another provider which accepts cryptocurrencies. It had its first student pay with bitcoin at the start of 2014.

The school decided to accept bitcoin and other cryptocurrencies including ethereum, litecoin and dash, after its Paypal was blocked on a number of occasions with persistent requests for proof of the legality of the business. This, coupled with the traditional transaction and conversion fees, encouraged them to make the transition, according to Stephen DeMeulenaere, co-founder of the school.

“With bitcoin, fees are generally very low, transactions clear immediately after payment is made and we can send those funds to our bank account in 10 minutes, or keep the funds in bitcoin, which has tripled in value since September 2015,” he says.

However, Ver, the early bitcoin investor, says for widespread uptake, there is a “chicken and egg” problem.

“[If] an education institution doesn’t want to accept bitcoin, their customers aren’t going to pay them in bitcoin,” he says. “And the customers don’t want to use bitcoin if they can’t actually spend it anywhere.”

Modern financing companies, including CommonBond and SoFi, which consolidate and refinance domestic student loans, have been paving the way in this field.

“One of the gaps we identified three years ago was refinancing of international student loans, because there wasn’t really a solution,” explains Ricardo Fernandez, head of business development at Prodigy Finance.

With its mission based around the concept of investing in the leaders of tomorrow, Prodigy Finance’s backers include alumni, private entities and impact investors. 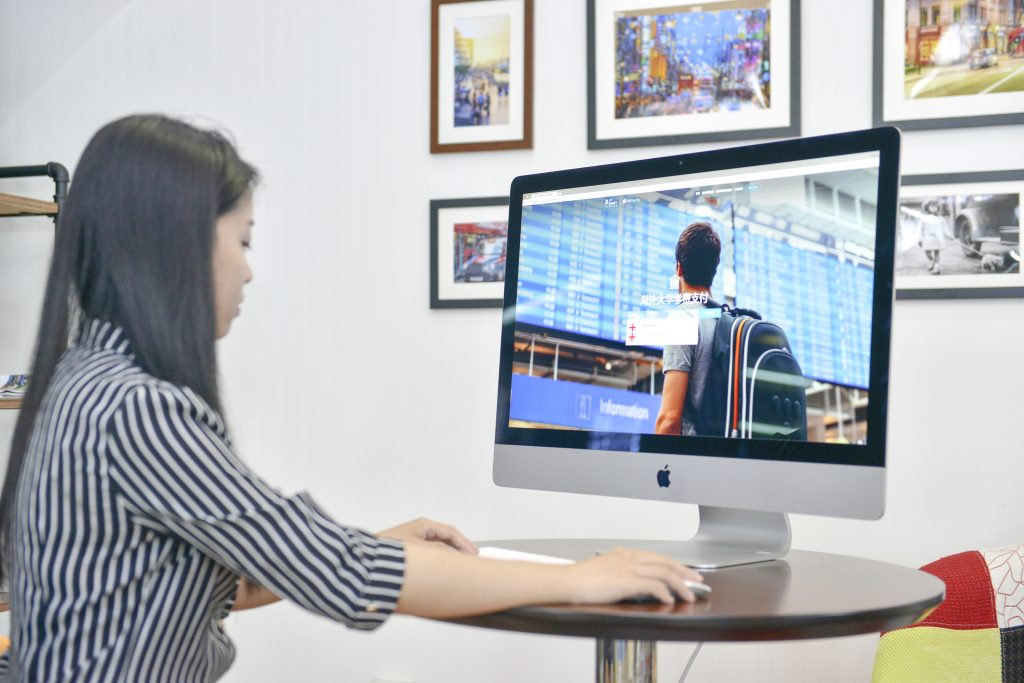 myMoney sees new regs in China as an opportunity, not a challenge

And in terms of international graduates paying back the loans, the platform has teamed up with a number of payment solutions to ensure that no further technical or regulatory barriers hinder this process.

Lending money to a student is “just the start of a relationship with a client”, Fernandez points out.
“If you can become a core interactor with your client at a critical moment of their life when they are changing countries… you are going to have an excellent client progression with them for whatever financial services product they need in the future.”

The advantages fintech brings to the international student’s journey don’t end at graduation, agrees Dino Leo, UK head of education at Western Union Business Solutions. “International students often become transnational entrepreneurs,” he says. “And fintech is opening the world to these people, helping them grow their businesses wherever they may be.”

• This is an abridged version of an article that first appeared in The PIE Review.

One Response to Click, pay, study – how fintech is impacting international education