International students bring economic benefits to the UK worth £20.3 billion, or 10 times the costs of hosting them, according to a new study jointly published by the Higher Education Policy Institute and Kaplan International Pathways.

"The UK has been rolling up the red carpet for international students, instead of rolling it out"

The research undertaken by London Economics provides a detailed analysis of the costs and benefits to the UK economy of welcoming approximately 231,000 new international students each year.

The analysis focuses on the 231,065 international students who commenced their studies in the UK in 2015/16, taking account of the total impacts associated with these students over the entire duration of their study.

The country providing the greatest number of EU first-year students in 2015/16 was Germany, with 7,250 students coming to the UK, closely followed by France and Italy, with 6,995 and 6,055 new students, respectively. 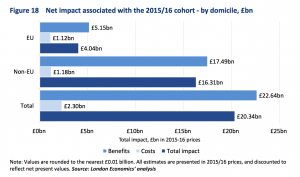 Meanwhile the public costs of hosting international students – including education, health and social security – totalled £2.3 bn, which for a typical EU student was £19,000, while the comparable figure for non-EU students was estimated to be £7,000.

The findings conclude that the net economic impact (benefits minus costs) of hosting international students totals £20.3 bn, or on average, £68,000 for each EU student and £95,000 for each non-EU student.

In other words, states the report, every 15 EU students and every 11 non-EU students generate £1m worth of net economic impact for the UK economy over the duration of their studies.

Commenting on the report, director of HEPI Nick Hillman said international students bring economic benefits to the UK that are worth 10 times the costs of hosting them. However, he added, in the past the Home Office has not accepted figures on the benefits on the grounds that they ignore the costs.

He said that the global competition for international students, the UK has been “rolling up the red carpet instead of rolling it out”.

“‘We welcomed the government’s decision to ask the Migration Advisory Committee to investigate international students. We now implore ministers and civil servants as well as the MAC to take this new evidence with the seriousness that it merits,”  Hillman said.

“Given the detail that we are presenting, we also urge the MAC to report earlier than the planned date of September 2018.”

Managing director of Kaplan International Pathways Linda Cowan told The PIE News that the challenge now is to ensure the UK provides a compelling and attractive offer as the best place to study.

“In recent decades, the UK has been phenomenally successful in recruiting international students… but other countries – notably Australia – have been catching up and the UK is now showing signs of losing ground.

“If this study can help with that final decision to take international students out of net migration it will send a positive signal around the world that the UK is very much open to qualified students to come study,” she added.