You are here: Home » Analysis » When it comes to Saudi mobility, is it all about the price of oil?

Posted on Jan 22, 2016 by Michael Deere
Posted in Analysis, under .
Tagged with Saudi Arabia.
Bookmark the permalink.

On the face of it, coupling the price of oil on the global market with the availability of student scholarships doesn’t seem like a link you’d naturally make; but introduce some key factors like a deficit of almost $100 billion, the collapse of one of the world’s largest industries, and a drastic fall in the value of your stock exchange, and well you can see why you might be counting your pennies.

About Michael Deere
Michael Deer is a UK international recruitment officer currently based across the Middle East, Africa and Central Asia. Previously he worked in press and is an aspiring cheesecake merchant.

"We’re already moving our focus more to the private market"

The Kingdom of Saudi Arabia has very quickly gone from one of the world’s wealthiest countries and student sponsors, to one of the most troubled global players.

The crash in oil prices over the past 18 months has seen an unprecedented deficit take hold of the Kingdom, and though their fortunes can manage for the time being, the change still requires a significant reduction in their expenditure.

The country’s oil producer Aramco currently exports over 10 million barrels of oil per day, but the revenue generated simply isn’t enough to cover what the country is spending, and the value of each barrel isn’t likely to rise anytime soon.

Aramco holds 15% of the global oil industry but other key players like the United States are tactically matching their prices to prevent being undercut. The recent removal of sanctions against Iran isn’t going to make life any easier for the Saudis either.

Iran is now able to trade their one million barrels a day on the global market which the Iranian president Hassan Rouhani described as a “turning point” for the country’s economy. This announcement alone cost the Saudis 6% off their stock market value in just a couple of days.

So it’s no surprise that the Kingdom is looking to reduce their outgoings, and the high costs associated with educating students abroad may have seen the HE sector put in their crosshairs.

The cancellation of the Middle East’s largest student recruitment event certainly sent rumours abuzz among those on the international circuit.

The International Exhibition & Conference on Higher Education, run by Saudi Arabia’s Ministry of Education, is a landmark event in every university’s calendar. Thousands of prospective students attend each year in search of their future university and with the likelihood of being sponsored by the Kingdom and some by Aramco.

The cancellation of this event marks the end to a six year tradition and potentially to the placement of a large number of students who rarely have a chance to meet university representatives due to the restrictions around travelling to the country and restrictions around hosting events when there.

Though some have suggested the cancellation may be reversed, an official from the organising company made the situation very clear by stating, “there is no exhibition for higher education this year.”

The secretive nature of Saudi means it is not possible to state with certainty whether this was purely a financial decision by the ministry; however as one university representative put it, “all the signs point to it being because of money.”

Hosting the event alone is a costly affair, particularly considering that some universities had their entire attendance costs covered.

A more critical factor lies in the allocation of the scholarships themselves. There has been no clear announcement in regards to scale backs to the King Abdullah Scholarship Programme which funds many student places.

But agents on the ground are already reporting a decrease in the numbers of sponsored students coming through their doors. There has also been no reassurance from the kingdom that these funds would be ring fenced against further budget reductions. 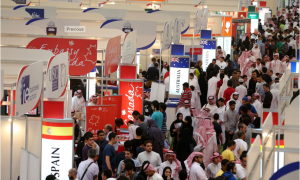 The MoE sponsored International Exhibition & Conference on Higher Education, which attracts thousands of perspective students annually, has been cancelled after six years.

Already reports have come through from international officers that some sponsored students have had their sponsorship withdrawn to study abroad, with the sponsors instead opting for students staying in Saudi. For a revenue strapped nation this wouldn’t be the most surprising move particularly when each student costs tens of thousands of dollars in tuition fees and living costs.

A respected HE agent in Riyadh who wished to remain anonymous described the situation in the kingdom as a “clear change in direction for the country”. He added, “the issue is around the lack of transparency on the decisions and why they are made.”

When asked what he thought this could mean for the KASP and the future of international education, the agent said, “the region will just have to adapt”.

“We’re already moving our focus more to the private market,” he said but added that “Saudi will always need scholarships”.

He posted that the government “may shift their focus to very specific degrees in areas like nursing where Saudi has made a lot of promises… They’ll be much more specific about what they fund and it may result in more committed students.’

The only true clarity on HE in Saudi has been around how scholarships will now be allocated, and, from what has been announced, diversifying seems like the best way forward.

Scholarships available such as KASP and those given through the Custodian of the Two Holy Mosques are being significantly tailored to the needs of the kingdom and linked directly with government department shortfalls.

The minister for education in Saudi, Azzam Al-Dakil has said “we will… not dump the labour market with specialities it does not need,” a view which was reaffirmed by the Custodian of the Two Holy Mosques, King Salman, who stated that he wanted to “harmonise the outputs of education and the needs of the labour market so that it contributes to bridging the gap.”

One of the largest papers in the kingdom, and one of the most pro-government, Al Sharq, has quoted a Saudi Ministry of Labour report as saying that “by focussing on the needs of the job market” savings of SR10bn ($2.6mn) could be made on the current SR22bn ($5.2mn) scholarship budget.

The move to directly link scholarships to labour shortfalls came with the tagline ‘your job, your scholarship’. The change, which was announced last year, and comes into effect this year, puts Saudi government departments at the heart of scholarship allocation, instead of being sole responsibility of the Ministry of Education.

Now individual ministries, like health and labour, are being put in control of coordinating funding giving them much more precision to not only hone in the skills needed, but will come with a seemingly significant reduction in scholarships awarded.

The move to directly link scholarships to labour shortfalls came with the tagline ‘your job, your scholarship

One Saudi based agency, A2Z, have already set their strategy to diversify in motion, with managing director, Sean Ireton, describing it as an “opportunity to provide greater options and reach new students.”

Ireton’s agency is seen as one of the most dynamic and fastest growing in the region, so it’s not a surprise that they are quick to respond to what he described as “natural market changes.”

“It’s a good opportunity to work more in schools and with privately funded students,” he added. “We can diversify our market with cheaper study options like Canada, and I imagine we’ll see an increase in the need for (university provided) scholarships.”

A level of uncertainty surrounds the future of the sponsor market in Saudi; however to meet their ambitions, particularly in regards to oil and health, there will clearly be a need for well-educated graduates.

It seems for the time being university international departments will either just have to sit tight and wait for announcements or make plans to diversify themselves through courses and efforts to target the less lucrative private funded market.

The one thing that is certain is that unless a significant global deal is struck, the kingdom’s deficit will deepen and the link between oil and scholarships will become much clearer.

2 Responses to When it comes to Saudi mobility, is it all about the price of oil?