As vaccination rates keep getting ramped up in Australia, the country is getting ready to welcome international students back. Having a federal structure has meant that different states and territories have drafted their own plans and strategies, in addition to the Covid-19 National Plan response.

About Manu Prakaash
Manu has a depth of experience across the broad umbrellas of PR, marketing, communications, and public affairs. For the best part of a decade, he worked with one of India's leading public sector organisations. Manu's experience involves dealing with the media, governments, industry bodies, multilateral organisations, not for profits, and the civil society. He most recently completed a Master in International Relations at the Australian National University, which complements his degrees in Management. Manu's research and writing interests include International Higher Education, International Relations, Politics, Public Policy, Sustainable Development, Climate Change, and strategic best practices in Business and Leadership. On the weekends, you'll find Manu hiking in and driving around, some of Canberra's many National Parks, along with his family.

With some 30,000 students at Go8 institutions currently offshore, the group "is hopeful 2022 will mark the beginning of an exciting new era for international education"

While some states follow a more conservative approach, New South Wales has announced that it will not require international student arrivals to quarantine, if they are fully vaccinated with TGA-recognised vaccines.

Western Australia, on the other hand, has confirmed the roadmap for the return of international students from Semester 1 of 2022, subject to the state achieving a 80% double vaccination rate, as per the state’s Safe Transition Plan. The student arrivals would need to be fully vaccinated with a TGA-approved vaccine and obtain a G2G Pass.

Speaking to The PIE, Curtin University’s vice-chancellor, Harlene Hayne, described the Safe Transition Plan for the start of Semester 1, 2022, as a “critical step in ensuring the vibrancy of our multicultural university campuses”.

“Curtin together with Study Perth, the Western Australian International Education Advisory, the other WA universities and the state government, is working to ensure that the return of international students runs smoothly and safely,” she said.

“Despite the hardships since the onset of the pandemic, many international students have continued to show their trust and commitment in Curtin, by continuing their studies online. We want to thank those students in particular, and we are excited to welcome them back to our campuses soon.”

When the state reaches its 90% vaccination target, fully vaccinated and tested travellers will be able to enter WA without quarantine, Payne highlighted.

“And there will be no cap on the number of vaccinated arrivals. This is terrific news for international students,” Payne told The PIE. StudyPerth and its member institutions are “in regular contact” with counterparts in other states and territories regarding our respective plans, he continued.

“We share the nation’s ambition to restore safe pathways to Australia for international students as soon as possible and we are very much part of the national effort to make this happen,” he said.

Similarly, the state of South Australia will welcome fully vaccinated international students, with no requirements for quarantining, once it achieves a 90% vaccination target. Stakeholders say the target is expected to be reached by late December 2021.

“At this stage they will need a travel exemption to enter Australia but we are working with the Australian government to understand if that may change once quarantine is no longer required. We hope it means there is no limit to the number of students we welcome back in our state, subject of course to flight availability,” chief executive of StudyAdelaide, Karyn Kent, told The PIE.

Asked about StudyAdelaide’s roadmap for recovering from the revenue losses due to the travel restrictions in the past 20 months, Kent said StudyAdelaide, along with its members, is boosting marketing efforts in key markets.

“We look forward to travelling overseas again to meet with agents, students and their families in person,” she said.

“The Study Australia partnership is a successful collaboration between Austrade and the states and territories, that sees us share key insights into the sector,” she said. The partnership will hold an agent-focused week-long event at the end of November.

“On top of the agenda has been the safe return of our international students Australia-wide,” Kent said.

“While South Australia was the first state to announce a plan to return students, the information sharing across the sector proved invaluable,” Kent posited, while shedding light on StudyAdelaide’s efforts towards collaborating with other state governments and federal government bodies for the opening up.

Queensland is still pursuing a cautious approach predominantly due to its lower vaccination rates, with the returning international students required to quarantine under the Queensland Student Arrivals Plan.

From January 2022, every two weeks 250 international students will be brought in, with students requiring face-to-face learning and practicals, particularly in medical science and healthcare, prioritised.

The regional quarantine facility at Wellcamp has been touted by leaders in Queensland as a strategic advantage and “a very important piece of the puzzle”.

Victoria’s arrivals plan has now been endorsed by the federal government, which could see international students start returning to Victorian universities by the end of the year at the rate of 120 per week. Meanwhile, the ACT has announced that fully-vaxxed international students returning in 2022 will not be required to quarantine, according to its student return plan.

Speaking to The PIE, Universities Australia deputy chief executive Anne-Marie Lansdown said she is “optimistic that a corner has been turned”.

The Northern Territory meanwhile, is in the process of submitting a plan to the federal government. If it is approved, the plan could facilitate entry of up to 180 students, via one to two flights into Darwin, in January 2022. 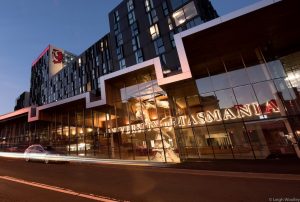 The University of Tasmania hopes to welcome international students in 2022. Photo: Wikimedia

Some industry leaders have expressed concerns that a lack of a unified and coordinated approach by Australia, as a whole, might be giving an unclear or confusing signal to current offshore and prospective students.

Phil Honeywood, CEO, of the International Education Association of Australia expressed his concerns on this front.

“There are many nations around the globe that have federal systems of government. Whether it be Canada or India, we find that their second tiers of government, at state or province level, have wide ranging powers.

“Nonetheless, it has come as a big surprise to many Australians during this pandemic just how much constitutional power our six states and two territory governments have. Because we are an island continent there has also been a national outlook that we must keep everyone safe by not opening borders too soon.

“Unfortunately, the combination of fractured governance, and genuine concerns to stay safe, have resulted in overseas students receiving no great clarity on their hopes for arrival dates back into Australia. Happily, some state governments have now progressed to the point where flights are now happening. For NSW the first much anticipated flights are already locked in for arrival on December 6 and 24.

Honeywood’s view on the matter is also shared by other stakeholders in the industry.

Calling for a more unified approach by states and territories, Nick Klomp, Regional Universities Network‘s chair and vice-chancellor of CQ University, expressed his perspective on this matter to The PIE.

“We would like to see there be a consistent approach across the states and territories in relation to [international students’] return, as it is important we send a consistent message to returning and prospective students,” he said.

Regional Australia has been facing shortages of skilled workers since the onset of the pandemic, and a decline in international student numbers has in-turn hit the regions hard.

Klomp reminded that regional communities, businesses and universities are “better for the contribution of our international students”.

Prior to the pandemic the whole international education industry was worth nearly $40 billion – 40% of that is student fees, but the other 60% is the economic activity within the Australian economy – CEO of Independent Higher Education Australia Simon Finn emphasised.

“The contribution that international education makes to our economy is really important… international students are important to local economies, small businesses across the country, as well as to the tourism industry,” he told The PIE.

IHEA feels it is “important for the government to get the policy and funding settings right to support the sector to recover”, with current deliberations in the government and the active consideration in the government over the need to not quarantine the fully vaccinated arrivals both “pleasing”, he said.

Along with regional Australia, the hospitality sector is “desperate” to see the return of international students who play a critical role in the country’s workforce while studying at the same time, Vicki Thomson, chief executive of The Group of Eight told The PIE.

“Covid and border closures have taken a toll on universities, business and industry,” she said.

“The Australian government’s recent announcement that it is looking at returning international students, skilled migrants and other visa holders by the end of the year is welcome news for Go8 universities, Australian business and the broader community.”

With some 30,000 students at Go8 institutions currently offshore, the group “is hopeful 2022 will mark the beginning of an exciting new era for international education”, the country’s fourth biggest export, Thomson said.