Key to the country’s future international education sector is people-to-people connections and personal relationships, rather than the economic impact of international students, New Zealand’s education minister told The PIE, as he joined a delegation visiting the 2022 NAFSA conference. The country has also launched a new global marketing campaign.

“Within the international education sector in New Zealand there is a good degree of consensus about what we’re trying to achieve,” Chris Hipkins said in Denver.

The country has announced an “immigration rebalance” and a consultation on an updated New Zealand International Education Strategy, which will close on June 24.

“Actually this isn’t just about volume, it’s about real value, not just for New Zealand but for the students who are studying in New Zealand,” Hipkins told The PIE at NAFSA.

“The ideal international student for us is one who leaves and wants to come back years down the track and bring their new family with them and maintain those links with the people that they become close with while they were in New Zealand.”

The gradual reopening of borders has benefited New Zealand in that it will “spread the demand for visa processing” ahead of an anticipated flurry of applications following two years of built up demand, he suggested.

“Not flooding the system with a whole lot of [visa] applications that then grind everything to a halt has been a key factor in the way we’ve staggered our reopening,” Hipkins said.

“The visa processing opens from July 31. And we will absolutely be able to give [students] a timely decision so that they can make their plans for 2023. Some might just squeeze in for this for the second half of 2022.”

He explained that for a country that would typically have 10,000 people arriving a day at the border, arrivals dropped to 4000 a fortnight during Covid.

“And so as we came back out of that, we had two years of built up demand, you know, from families wanting to reconnect, from students, workers, everyone”.

He stated, “We’re pretty confident we’ll be able to turn [applications] around within a reasonable timeframe… there are some markets where there’s been higher incidence of visa fraud. They tend to be markets that take longer to process them.”

There will now be a “really big push from New Zealand’s universities”, he noted. A new global brand campaign – I AM NEW – will be targeting 10 key markets from June 2, in time for the border reopening.

Central to the new campaign are the stories of eight international students from China, Colombia, Germany, India, Japan, Thailand, the US and Vietnam. Together with Māori fashion designer Kiri Nathan, they have designed individual ‘kākahu’ (garments) that symbolise their educational attainment as well as the cultural journey they have undertaken during their time in the country.

“What we offer global students is an opportunity to experience something new, different, and ongoing,” McPherson said on the launch of the campaign. “It is a new perspective that redefines success in global education beyond degrees and academic achievement and builds greater understanding of the value of continuous learning throughout life.”

In the first year of Covid, higher education held up “pretty well”, he continued, while 2021 was tough when international numbers started to drop off. Further, 2022 “has been really tough” as students on three-year programs completed their courses, while only limited numbers of international students had enrolled.

“It’ll take us a year or two to build back because if you’re rebuilding that pipeline, it will take a year or two,” he said.

Diversity among incoming international students – as well as an emphasis on outbound mobility and global citizenship – is at the heart of the agenda going ahead.

“We want to make sure that we get we’re attracting a really diverse international student community. There are some obvious large growth areas for New Zealand, we’ve got a lot of international students from China and India and we absolutely will be welcoming them back as soon as we’re able to.

“But actually we want to see a greater diversification in our international student population as well,” he told The PIE ahead of a promotional tour to Latin America. 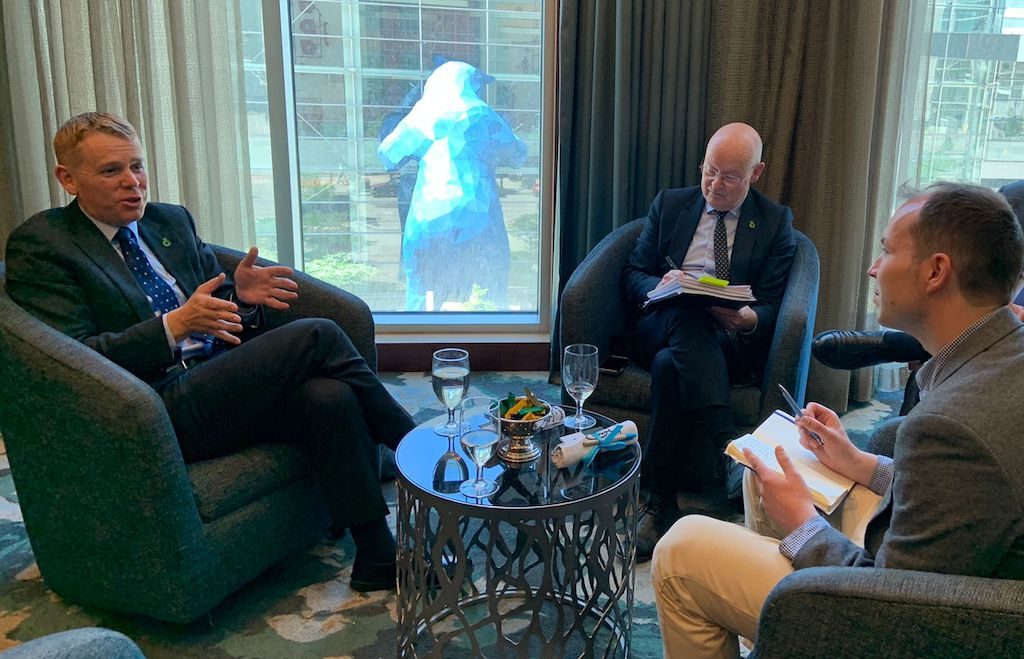 The minister was speaking with The PIE at the NAFSA conference in Denver.

And China – which remains “an incredibly important international education partner” – is also key as demand for Chinese language in New Zealand schools is such “that we can’t keep up with it”, Hipkins said.

“Through our international arrangements with them, they send [language assistants] to New Zealand to teach the Chinese language in New Zealand schools and frankly, the schools just can’t get enough of them.”

Hipkins explained that the recently announced changes in post study work rights were designed to stop a “very limited number of providers” that had been marketing New Zealand international education as a destination to live in, rather than one to study in.

While degree level students maintain work rights that mirror the length of their studies, non-degree students will no longer have access to work after graduation, unless filling specific shortage and skilled occupations.

The changes below degree level are designed to stop the exploitation of international students, who are viewed by some as “a source of cheap labour for New Zealand businesses”, he said.

“We’ve taken a very low tolerance approach there because that’s not good for New Zealand, it’s not good for the students. We’ve effectively tried to drive that out of the market.”

The minister had been criticised by the New Zealand International Students’ Association for the use of the phrase “backdoor residency”, which it said fuels existing anti-international/ anti-migrant and prejudicial attitudes in the country.

Responding to the comments from NZISA, the minister was quick to state that it was not a criticism of the students.

“Ultimately they were doing what they had been offered. It’s more a criticism of a small number of the providers in terms of how they were promoting New Zealand.

“We also got some disappointment from some students who came to New Zealand and they didn’t get necessarily the opportunities that they were offered. And so we want to make sure that whatever we’re putting out to the world as a really compelling offering for international students and one that we actually deliver on.”

Hipkins also recognised that the country’s English language teaching sector had suffered significantly – but he said the fact that language schools could already welcome students in on short-term visitor visas if they came from Visa Waiver countries meant that the green shoots of recovery were already beginning.

“In the last few engagements I’ve had with the sector representatives, they’ve had more of a spring in their step than they have had for a while.”