Denial rates for US F1 visas reached “a new high” in Nigeria in 2022, with around two in three students being rejected, according to associate director of international enrolment at Northeastern University, Salmaan Faraaz.

"I have been denied twice and it really hurts"

Likewise, study abroad counsellors claim the denial rates for students in Ghana and other Sub-Saharan regions are trending in a similar fashion.

The 2022 Open Doors data indicate there were 14,438 Nigerian and 4,916 Ghanaian students in the US, up from 12,860 and 4,229 compared to 2021. Yet, according to Faraaz, consular officers “have often highlighted concerns over student finances, forged documents, missing strong ties to home country, and students not being well prepared for US education”.

There are several issues that have long plagued students from the Sub-Saharan region seeking to study abroad that industry leaders attribute to the high number of rejections.

Former US ambassador to Ghana, Robert Jackson, said Ghana is among the top five countries whose citizens overstay visas in the US, despite being considerably smaller than the four other countries on the list.

He claimed that because of the thousands of Ghanaians who did not return home after their US visa expired, “it makes it harder for others to get visas”.

The student said he wanted to remain anonymous because the rejections are embarrassing. Moreover, he still aims to apply again and was concerned about issuing a public statement.

Several agents working in the region spoke with The PIE about their perceived reasons for visa denials.

“I can say that eight out of 10 Ghanaian students I work with have either an uncle as their sponsor, or their age is higher than what is required for undergrad studies, or their gap years can’t be explained, or they can’t explain why they are going for the program they chose,” Onyenaucheya said.

Indeed, demonstrating proof of strong home ties, sufficient funding from parents or direct caregivers and being able to extensively articulate reasons for choosing specific universities and programs of study were themes that resounded with counsellors who spoke with The PIE.

Cephas Kugbeadzor, business development manager in Ghana for Global Study Partners said, “From my experience, unlike the embassies of the UK, Australia and other study destinations, the US embassy does not state specific reasons for denying visas.”

He shared a rejection letter that was given to a student at the embassy in Guinea, Conakry.

“The student happens to be a Ghanaian student who had travelled to Guinea for his visa interview simply because he couldn’t secure an appointment for interview at the US embassy in Ghana,” it said.

While the student was not one of Kugbeadzor’s, he said he has found refusal notes to be generic and said the do not always address specific reasons students are denied. He added reasons could help students “make amends in subsequent applications in case they went wrong anywhere”. 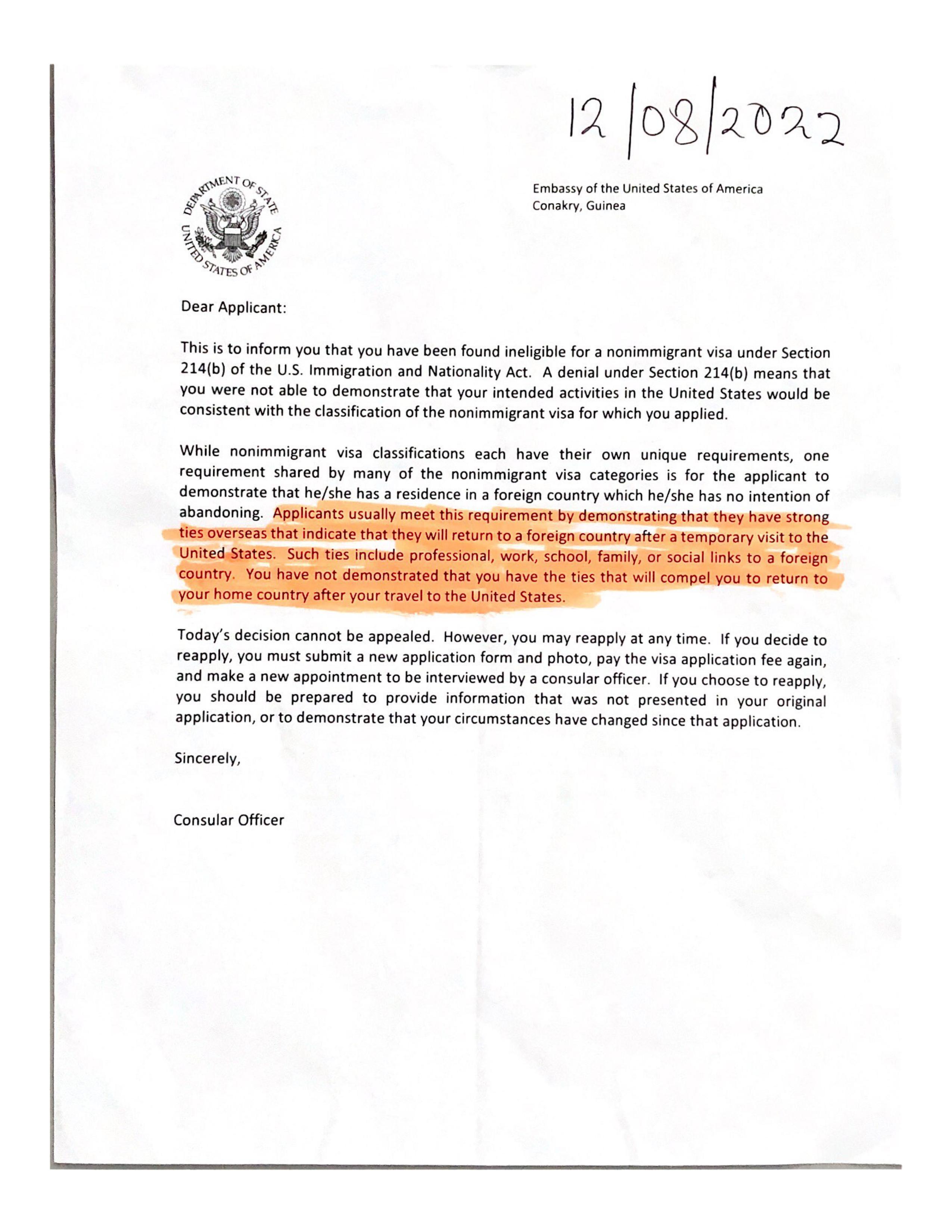 Princewill Attai, senior consultant AECC, offers suggestions to students from the sub-Saharan region to help increase their chances of a straightforward visa process ending in approval. He advises students to seek as many scholarships or tuition discounts as possible.

“Some consulars may have a subconscious impression that students from the Sub-Saharan region aren’t financially capable,” Attai told The PIE. “That is a valid reason. But with a scholarship their worries will lighten.”

He urged applicants to be extremely knowledgeable about their course of study. “Know the modules, the top five courses in the program, the program director, lecturers etc.”

Finally, he suggested applicants should be able to relate reasons for pursuing a degree in the US to their educational background and experiences. “What I’ve noticed is, chances are, the next 50 applicants will be saying the exact same thing as you. It’s a turn off. Relating every answer given during the interview to a personal and convincing story is key.”

Adelaide Aba Ansah, senior managing consultant at Come Study International asserted the US embassy is ready and willing to issue visas to qualified students. “Let’s get the narrative right. The onus is on the applicant to do their homework and prove that they are eligible.”

“Do your research well,” Ansah advises her students. “And be able to explain your background, reasoning, and rationale behind all your answers. No one is going to spoon-feed you.”