Posted on Apr 5, 2019 by Kerrie Kennedy
Posted in News, under North America.
Tagged with China, Department of Stae, Visa.
Bookmark the permalink.

At least 100 Chinese international students who visited their home country during a 2018 school break have not been able to return to their studies in the US due to their visa applications being caught up in lengthy delays and “administrative processing” by the US State Department.

A report on Chinese media outlet Caixing Global stated that many of the students who were studying STEM subjects at master’s or doctoral level across the US said their degrees could be in jeopardy if they cannot return to complete their studies.

“This is not only harming us but the US as well”

According to the US State Department website, visas can either be approved or denied. However, the visa office can implement “administrative processing” for visa applications which may be denied – a process with unpredictable waiting times.

In 2018 the Department announced it was planning to shorten the validity length of student visas for Chinese students studying a masters PhD in robotics, aviation and high-end manufacturing, which have been particularly sensitive in recent years.

The shortened validly length meant that if students left the US, they would have to apply for a new visa.

Some Chinese media criticised the new policy as “destructive”, claiming it would lead to a decline in quality of students that could negatively impact the US STEM field in the long run.

In response to their visa delays, Chinese students who have not been able to return to the US for the most recent semester have been organising through a WeChat group in the hope of raising awareness of their plight.

Additionally, branches of the Chinese Students and Scholars Association at the University of Illinois Urbana-Champaign, University of California-Berkeley, and Cornell University published an open letter in the WeChat group to gather support and urge more Chinese students in the US to sign a petition to the US State Department. 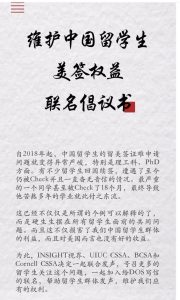 The open letter published by the Chinese Students and Scholars Association

“Since 2018, a lot of Chinese students are having difficulties getting their study visa extended in the US…this is not only harming us but the US as well,” read the letter.

It also highlighted the plight of one student who had returned to China to renew his visa and was subject to administrative processing for as long as 18 months, eventually dropping out of university.

The latest Open Doors data revealed that Chinese students made up a third (33.2%) of international students in the US in 2017/18, with a significant number enrolled in STEM-focused programs.

But this has not stopped the US from increasing the number of visas placed under “administrative processing”.

According to co-founder and COO of Sunrise International Education David Weeks, the ‘administrative processing’ delays may be “extra red tape” for these students, but could also be a result of finite resources and staff at the US consulates in China.

“You may have a consular officer who has to make a student visa decision who just isn’t familiar enough with some of these advanced topics in AI and material science,” Weeks told The PIE News.

“So perhaps some of the added delays are coming from a staffing issue in the Department of State – the folks who are supposed to be evaluating a visa application may need to run an application by multiple experts before they feel that they have enough information to make a decision.”

And while the restrictions on Chinese student visas for advanced study in certain “sensitive” areas of the sciences isn’t particularly new, Weeks said it was unfortunate to see it is beginning to have “a real effect on the lives and financial situations of students”.

“I can say for certain that restrictions…in these scientific fields will have uneven effects and cause big issues for some US universities,” he added.

“Some universities in the US midwest or other rural locations have really standout programs in civil aviation and contracts with China’s state-owned airlines for example, and Chinese students make up a significant share of students at some advanced graduate science programs at US universities.”

However, he added that recent events in popular study abroad destinations may eventually lead to a downturn in the numbers considering Canada, Australia and New Zealand also.

“At the moment, the Huawei situation in Canada, coupled with the various campus incidents on Canadian campuses involving sensitive territories in China, has caused a lot of hand-wringing about Canada,” he told The PIE.

“Australia and New Zealand have also been doing some soul-searching about the role of Chinese students on campus, which has been picked up by news outlets in China.

“I think that Chinese school counsellors and principals are eager to hear more from Education USA and the [State Department] because ultimately the students and parents dislike the uncertainty that it’s creating in university applications and planning for the future.”

3 Responses to US: Chinese students trapped in visa limbo as applications delayed