The University at Buffalo has terminated the F-1 status of at least 30 Chinese students, which one international education organisation says is the largest scale termination it has seen in a decade.

The students’ statuses were terminated as they had not submitted the I-94 to International Student Services within 30 days of arrival on campus. The document is the US Department of Homeland Security’s arrival and departure record of travellers admitted to the country, which confirms they have been legally admitted to the US in a specific visa status and for a duration of time.

“The students affected by this incident are currently very anxious”

The school has said its ISS office followed federally mandated steps, and terminations were carried out properly after its “extensive efforts to communicate with and educate students”.

The terminated students “did not attend pre-arrival webinars, read pre-arrival newsletters, e-forms and emails, or attend immigration session”, it added.

An Indian student has also reported that he faces the same situation, which may result in the students having to leave the country.

Writing to the president and the senior international officer of University at Buffalo, the NAFSA China Member Interest Group warned that the “students are now facing termination of their SEVIS record and immediate departure from the US”. 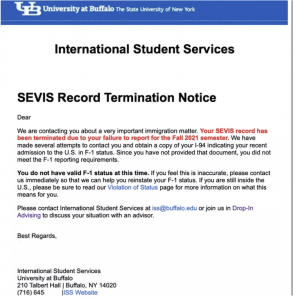 The students have received letters from Buffalo informing them that their SEVIS record has been terminated.

The letter noted that schools are able to directly access the I-94 form without a student submitting a copy, and it urged the institution to reconsider its outreach process in the future. It also called for Buffalo to “correct the termination status for these students at the earliest time possible”.

“We agree that the students should have taken better responsibility in reviewing their emails given they are in the US (despite their cultural norms of using other methods to communicate electronically),” the letter read.

“However, all of the students are presently taking classes on campus and their course schedules are in the enrolment system.”

While reaching students outside of email contact requires more work for Buffalo administrators, the immediate termination of their SEVIS record is “incredibly Draconian”, the advocates continued.

“Students can be sanctioned but to have them travel to China, quarantine, adjust to remote classes, re-check their vaccines status and then re-enter the US in the midst of a global pandemic not only threatens their academic wellbeing but their physical health,” the letter said.

The Chinese Students and Scholars Association at Buffalo has highlighted on social media that the I-94 form “is not a very difficult document to obtain”, but not all schools require it.

“Many American colleges and universities do not have this requirement,” the organisation wrote. It also added that the Chinese Consulate General in New York has contacted Buffalo and its ISS office, but had not received a response.

The Consulate General has meanwhile reminded students to “abide by the relevant regulations of the school and protect their student status”. Students must also “develop the habit of checking the emails sent by the relevant departments… in a timely, patient and careful manner, and do it on time according to the requirements”.

WholeRen Education – which is one of six signees of the letter along with students and has served dismissed Chinese students for over 10 years – said that this is the “first time we see such a large scale by a single school”.

“When schools talk about creating a diverse environment and bringing in international students, they should be educators and meet students half way,” Andrew Chen, chief learning officer at WholeRen told The PIE.

“Email is not the way students in China typically communicate and there is a learning curve for international students when it comes to US university norms. This is a cultural competency issue for all of us in international education,” he added, calling for Buffalo to change its outreach policy.

“The students affected by this incident are currently very anxious, because many people wake up and are immersed in planning for the next day of study and life, and suddenly receive notice that their student status has been terminated,” UB CSSA added.

“For those students who have been to the US for more than a month, after experiencing the epidemic for more than a year, they have finally overcome many difficulties and high ticket prices to come to the US, and gradually get their studies and life back on track.

“The students also feel that their situation has not been taken into consideration, because some people have never received important notices. Considering that someone had encountered such a situation and successfully solved it with the help of the school, the students were also confused and chilled by the school’s decision this year.”

Students have begun to search for flight tickets to return home, and what awaits, according to UB CSSA, is “high-priced air tickets, one-month self-financed quarantine, visa fees for re-visa, and perhaps the inability to complete online courses”.

“At the same time, we are also waiting for the school to respond to this matter and give an answer that may not be the most satisfactory, but the most sincere,” the group said.

The China Consulate stepping in to issue a public alert on the matter adds “fuel to the perception that the US educational system supports anti-Asian sentiment”, the NAFSA China MIG letter added.

“Assuring the legal status of students is, of course, every school’s responsibility. The fact, though, that SUNY [Buffalo] had access to information they needed via other means and the punitive nature of a non-response to outreach from one source is disastrous for students and their families,” it said.

In a statement to The PIE News, Buffalo said it has been a national leader in attracting excellent international students from around the world “for many years”.

In fall 2021, the institution enrolled more than 4,500 students on F-1 visas, including more than 2,000 newly arrived students.

“In order to maintain their student (F-1) visa status, students who have newly arrived in the US are required to report to their Designated School Official, submit a valid US address, pay any required fees and enrol full-time,” a spokesperson said.

“In accordance with federal regulations governing the Student and Exchange Visitor Program, UB is obligated to create an institutional standard for reporting this information to the DHS within 30 days from a student’s program start date (the start of classes). This includes proof of a valid F-1 entry into the US (a completed “Arrival/Departure Record” from the DHS). Without proof of this information, the university cannot report their valid presence in the US.”

Some 37 students are in violation of their F-1 status, they added.

“UB’s ISS office followed federally mandated steps, and the terminations were carried out properly, after ISS’s extensive efforts to communicate with and educate students. A vast majority of students in this program are in full compliance with the regulations. This semester approximately 98.3% of the newly arrived students fulfilled the reporting requirements,” they added.

“UB’s ISS office works diligently to avoid terminating students and has made many proactive attempts to educate new students about the process. Those students who were terminated did not attend pre-arrival webinars, read pre-arrival newsletters, e-forms and emails, or attend immigration sessions. All of these educational opportunities explain the process, and how to comply with these regulations.

“While it’s not likely that students terminated will be eligible for reinstatement with USCIS, advisors are working with each student to review their case, consider their personal situation and work with them to find the best way to return to a valid F-1 status.”