The UK government needs to work with the country’s higher education sector in order to ensure the immigration system is best prepared to grow its international education offering, according to the results of the seventh QS International Student Survey.

Some 75,000 prospective students from 191 countries participated in the survey, with responses indicating that universities will have to focus on specific regions for future recruitment.

As Brexit “uncertainty” is set to continue, the document suggests Brexit’s long-term effects on the UK’s higher education sector are yet to be realised.

Recruitment strategies need to be informed by “emerging attitudes and dynamics”, according to the higher education company.

While 44% of Irish, 39% of German and 38% of Portuguese and Spanish students respectively indicated that Brexit meant they would be less inclined to study in the UK, the country remains attractive to prospective students from North Africa, the Middle East, and Commonwealth countries.

The survey revealed that Morocco, Algeria, Afghanistan and Iraq have seen a net gain in interest thanks to Brexit of 27%, 26%, 21% and 18%, respectively.

However the UK’s largest source markets for international students – China and India – are both more negative than they are positive with regards to Brexit, it suggested.

Additionally, more than a third (36%) of EU students suggested they would be less likely to study in the UK because of Brexit, equating to approximately 20,000 EU students “at risk” of choosing an alternative study destination. 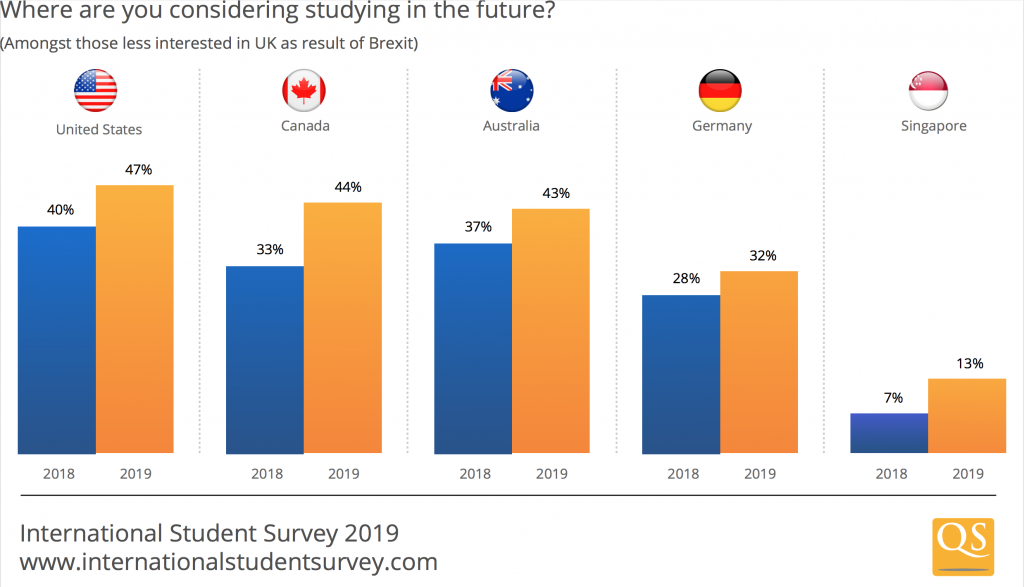 The survey also revealed that more than half of non-EU international students said they would be interested in studying at a branch campus of a UK university based in the EU, and QS touts transnational education as a potential way for UK higher education to reach more students.

“As new attitudes and solutions emerge, the idea of transnational education could become a more prominent and popular way for international students to study at a UK university,” the survey explained.

In a statement Nicky Morgan MP, chair of the Treasury Select Committee and secretary of the All-Party Parliamentary Group for International Students said the report shows how future immigration policy should “reflect the importance of international students to our universities and economy”.

“I am particularly supportive of its recommendation that the government extend its post-study leave period further than the six months it has proposed in the International Education Strategy,” Morgan said.

“This, of course, complements the amendment to the Immigration Bill I co-signed, laid by the former Universities minister, Jo Johnson, which would ensure that international students are able to work here for two years after graduation.”

QS suggests that extending the post-study leave period proposed in the International Education Strategy could be an effective way of increasing international student enrolment numbers.

“Over three-quarters (77%) claim that an extension [of the post-study leave period] would make them more likely to consider studying in the UK,” the report explained.

It also recommended that a post-Brexit fee structure for EU students be introduced to “alleviate concerns” about the financial viability of studying in the UK.

Earlier this week UK Universities minister Chris Skidmore announced that EU nationals who start a higher education course in England in the 2020/21 academic year will remain eligible for financial support.

However, QS’s report suggests only six in 10 prospective EU students were aware that they would be eligible for the same student loans and tuition fees as UK domestic students for courses beginning in the 2019/2020 academic year.

Commenting on the minister’s announcement, QS’s director of Marketing & Market Intelligence Paul Raybould noted that financial viability of the UK as a study destination is a key concern of EU students dissuaded from studying in the UK due to Brexit.

“The lack of any long-term agreement on the amount that EU students will have to pay starting in the 2021/22 academic year presents a significant barrier to easing financial concerns for a large number of prospective students,” he said.

“In the midst of Brexit uncertainty and a shifting policy agenda, UK universities must look ahead to understand the new dynamics and attitudes emerging to ensure the sector rises to the international recruitment challenge.”