Education consultancy UKEAS has rebranded as Intake Education as it seeks to establish its identity as “leader in the global education advisory”.

Globally, Intake is up 37% on two years ago, but recovery is staggered across markets

Founded in 1993 in Taiwan, UKEAS has grown to 30 offices in Asia, Africa and Europe in almost three decades. Its advisors have helped almost 100,000 students enrol at partner universities, schools, and colleges overseas.

“Our new name will allow us to cut through the noise and establish our identity in the crowded overseas education market, propelling our role as a global leader in education advisory to the next level,” the company said.

“UKEAS has a long story,” explained Richard Jones, head of partnerships at the education advisory company.

“The more January start options we have, the better it is for the future, pandemic or not”

“From our beginnings, focused very much on the UK and Ireland, we’ve developed our portfolio of destination markets to include Australia, New Zealand, Canada, America, etc,” he continued.

“UKEAS has had tremendous success. And it’s at this point of our great success that we’re in a position to really move forward and take the best of what we’ve got and to develop it even further to reach new goals.”

The company’s new slogan, ‘The Future In You’, is aimed to illustrate Intake’s focus on leading students to a better future via overseas education.

“We want to be the global leader [for] our partners to come to and ask questions to help consult with developing strategies for entering the markets in which we operate. And we do intend to operate in more markets,” said CEO Pieter Funnekotter.

After opening it’s first Indian office in New Delhi in December, Intake is planning to open further locations in Bangalore and Pune in mid-September, with Mumbai following this October, to directly advise students.

Two additional centres will open in either Hyderabad, Calcutta, Ahmedabad and Chennai by December or January. By the end of 2022, Intake plans on having 10 offices in the country.

“We’re not going to try to expand as quickly as possible. It’s about getting the quality of service of service as best as it can be,” Funnekotter said.

Along with an app and an online portal to allow students to apply directly from phones or computers, Intake will offer a scholarship scheme for the “best and brightest” students.

“[We’re looking] to fully fund their tuition for a year overseas, along with all of the other costs that they would incur on the year, very much with the aim that when they return home to their local communities and countries, that they’re going to be bringing the benefits of their education with back with them,” Jones noted.

Intake also detailed its recovery after Covid-19 at its launch session.

Globally, Intake is up 37% on two years ago and is more than double where it was at this time last year, but recovery is more staggered across markets, Funnekotter explained.

“If you look at Taiwan and Southeast Asia as regions, things are much, much better than last year, but we still haven’t fully caught up on two years ago,” he said. “We’re still down by a little more than a third in Taiwan year on year.”

Universities which have continued offering January starts for 2022 will “no doubt” benefit. Previous reports from the company suggested the January 2021 intake would see 24.8% more students in seven countries than in January 2020.

“The more January start options we have, the better it is for the future, pandemic or not. So we think that we’ll probably be closer to 20% down in Southeast Asia, 20-25% down in Taiwan when all is said and done towards the UK.” 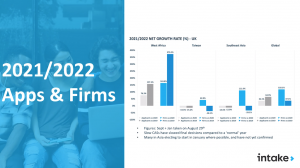 Slow CAS issuance has played a role not just in Taiwan and Southeast Asia, but also in West Africa, he continued.

“Despite that big, big growth that you can see there in West Africa… it’s still been tough and our teams are struggling to get the CAS’s through, no doubt, because they’ve been flooded with apps from India and from West Africa.

“But the universities that are really benefiting are the ones that have those systems in place that are allowing CAS to be issued really quickly.”

While students in certain countries such as Taiwan, Thailand, Vietnam are more cautious than those from India, Nigeria, Ghana or the Philippines, the Intake pipeline is reforming “quite nicely”.

“Overall, the picture is really very positive for all markets because things are on the rebound or are continuing to go extremely well,” Funnekotter added.