The UK government has published its long-awaited immigration White Paper, which outlines changes to student visa rules that would extend the length of time international bachelor’s, master’s, and PhD students have to stay and find work in the country after graduating.

The White Paper has also indicated – pending full review by spring – that the min. salary threshold to be able to access the jobs market could be £30,000, but importantly, graduate entry jobs would be subject to a lower (unspecified) salary threshold requirement and relaxed rules for employers keen to hire them.

Following the recent MAC report on students, the government outlined its “skills-based”  immigration plans and announced it intends to improve the current offer to students.

All students who have completed a degree and wish to stay on in the UK to work can benefit from six months’ post-study leave – this is a step farther than the MAC recommendations to enable this at master’s level only; the government made this tweak at bachelor’s level too.

“We should make it easier for them to stay in the UK and to work, and in that case the salary threshold will be a lot lower”

Those who have completed a PhD will have 12 months.

The proposals will also ensure there is no limit on the number of “genuine international students” who can come to the UK to study.

“We will also allow for students studying at bachelor’s level or above to be able to apply to switch into the skilled workers route up to three months before the end of their course in the UK, and from outside of the UK for two years after their graduation,” the paper details.

“We should be more welcoming to students in this country,” UK home secretary Sajid Javid told the BBC.

“Not just to come and study in our great universities, but those that then graduate and get these great skills from fantastic universities, we should make it easier for them to stay in the UK and to work, and in that case the salary threshold will be a lot lower.”

Vivienne Stern, director of Universities UK International, said UK universities would be pleased to see the announcement “clearly recognises” the important contributions that international students make to the country.

“Lengthening the period further would help the UK keep up with our international competitors, such as Canada and Australia”

“Allowing graduates to stay on for longer to find work in the UK sends the message that international students are welcome here, and we value the skills they bring,” she noted.

“Universities will continue to campaign for a new, two-year, post-study work visa and we are encouraged to see that the government is willing to make change in this area.”

According to Russell Group head of policy, Jessica Cole, allowing international graduates to remain in the UK for up to six months after completing their studies is a “step in the right direction”.

“Lengthening the period further would help the UK keep up with our international competitors, such as Canada and Australia,” Cole said.

To lead the world in the industries of the future, our action must match our ambition. £30k salary threshold would severely restrict the number of talented young researchers, scientists and innovators who can deploy their talents here for the good of our country. Self-defeating!

But in India, Sushil Sukhwani of Edwise Overseas Education Consultants, doubted that the policy change would have a big impact on the Indian student market – which has notoriously dipped by almost 25% since a post-study work seeking period was scrapped.

“It’s definitely a positive step and gives students more time to search for employment,’ he told The PIE News. “It will however not significantly increase the interest as they were already permitted to stay back and search for a job for four months.”

This was the period between finishing studies and officially graduating that Sukhwani refers to – difficulties finding employers willing to sponsor a student to switch to Tier 2, and within that timeframe, are reported.

The resident market labour test (which did not apply when hiring a Tier 4 student switching into Tier 2) has been scrapped for all Tier 2 hires now – which could well make employers less averse to hiring international students however. (The gov will consult on the need for a light-touch version for graduate entry jobs). 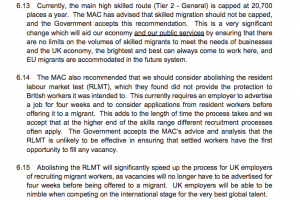 Outside of graduate hires though, a decision to maintain the standard salary threshold at £30,000 for workers with intermediate level skills (again, this is being consulted on) would have “serious implications” for international staff at UK universities, according to Alistair Jarvis, chief executive of Universities UK.

“63% of European Economic Area nationals working as technicians at UK universities earn below £30,000, in vital areas such as biosciences and clinical medicine EEA nationals make up over a quarter of the technical workforce,” he said.

Jarvis also noted that EU students will also now require a study visa under these proposals, “placing an additional burden on students and universities”.

“Over the coming months of consultation, we will be seeking changes to these proposals to ensure the best possible deal for university staff and students.”

But the government did nod to the European mobility agreement Erasmus, which currently welcomes 70,000 Europeans into the UK, and indicate it would try to safeguard such visa-free routes.

“If we continue to participate in this or a similar programme, we intend to ensure that EU citizens can study in the UK without needing to go through the full student visa process,” says the White Paper.