UK universities have an “opportunity” to shape EU student recruitment markets post-Brexit, but need to be prepared to adapt to changes in demand stemming from Covid-19 and Brexit, speakers have said at UUKi’s International higher education forum 2021.

“As sadly expected, applications are down at the moment, [by] just over 40% from the EU for this upcoming academic intake,” senior international officer at the University of Sussex, Holly Smith noted. “Now… that will vary greatly from university to university.”

Ireland is the only EU country with an increase in applications, with a 26% rise, attributed largely to the announcement that Irish nationals would remain eligible for home fees and the tuition fee loan going forward, she hinted.

“It is really important to note… that the EU is made up of a large number of individual markets”, she highlighted.

“It’s really challenging to put a one size fits all approach when you’re talking about EU recruitment, particularly going forward. If you did it before, I wouldn’t recommend doing that in the future. It’s not going to work well for your strategy.”

Revealing some new research from British Council’s Brexit temperature update, carried out in February and March, Almut Caspary, HE & Science lead, EU Region, at the British Council highlighted that cost remains the number one issue for EU students.

“Cost concerns and study experience, quality of teaching, those are the most important factors still, when students are choosing where to study. Covid-19 factors aren’t overtaking those considerations,” she said. 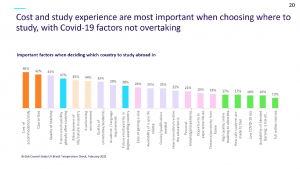 “For now, I think it’s a positive that as regards EU students Covid-19 doesn’t seem to have the same impact as it has for students from the rest of the world. And that’s despite the reporting, which obviously has taken place across the EU, the UK hasn’t always done so well, especially not at the beginning [of the pandemic].”

A previous survey of students across the EU in October/November 2020 also found that 51% had said that their study plans had not been affected by the pandemic, Caspary noted.

The British Council has previously warned that “misconceptions about the application process, fees and requirements… may be discouraging some from applying”.

While pre-pandemic in 2019/20 the Russell Group “enjoyed the lion’s share” of the approximately 150,000 EU students in the UK, some post-92 universities were “doing extremely well”, Smith reminded.

Previously, funding arrangements with Scottish universities meant EU students were not charged tuition fees in Scotland, and the access to tuition fee loans in the rest of the UK, were “key selling points”, she noted.

EU students were also attracted the UK’s quality education without the need for a visa, along with rights to health care and working, she said.

Others at the event indicated that Scottish universities are behind other UK counterparts in the EU recruitment market, as they previously did not focus on recruiting students but waited for EU students to enrol.

Adding a perspective from Scotland, Ian Thomson, director, International Recruitment and Partnerships at the University of Glasgow said his team had been approaching the Scottish government to try to bring the EU into its Saltire Scholarship scheme, but without success.

“[An announcement] didn’t happen and it still hasn’t happened, and it’s been kicked into touch, until after the election [on May 6]. So there’s a perfect example of how we can totally get it wrong and know something that should have been put in place to offset the decline in EU students hasn’t happened,” he said.

Further research from the British Council, surveying students in Germany, France, Greece and Poland, has suggested a “mixed picture” regarding student sentiment on Brexit, Caspary added.

“What we are seeing is that the attitude in Germany and France seems to be softening a little – it was more negative last year. On the other hand, Greece and Poland, attitudes are hardening. They’re more negative now,” she noted.

“We think, from the focus groups [with prospective students] we’ve had, especially in Greece and Poland… in February, we think that that is very likely to do with the cost increase and with the realisation that it actually is going to be very much more expensive for students to go to the UK now to study, whereas a year before that reality hadn’t kicked in yet, it was more perhaps sentimental attitude.”

Through the focus groups, students have indicated concerns with cost, as well as a desire to understand employment opportunities, she added.

“The UK degree is extremely highly valued in terms of its employment value, and they really want to understand what employment opportunities they will have in the UK once they finish their degree and then also with the UK degree anywhere else in the world,” she continued.

“The positive is that this is something that we can grasp”

“I think, obviously with the graduate route and the changes to the immigration system… if we communicate that well to students, then I think that’s going to be really beneficial for EU students.”

“Some of us might not have wanted to leave the EU, some are conscious of the big impact it’s having on our student recruitment activities and the numbers coming through. But the positive is that this is something that we can grasp. This is an opportunity for us to shape those markets, to use that intel… and to think carefully about how we get ourselves positioned correctly and make sure our offer is exactly what it needs to be in those markets.”