The number of UK Tier 4 sponsored study visas granted increased by 16% in 2019, with stakeholders welcoming the government figures as the “first good look” at this year’s recruitment and acknowledging the post-study work re-introduction for the positive figures.

According to the Office for National Statistics, immigration for study is the most common reason for non-EU citizens moving to the UK.

Together, China and India accounted for more than half of all non-EEA Tier 4 visas granted – 43% and 11% respectively, the statistics show.

Saudi Arabia has also seen a rise in visas granted, recording an extra 988 in 2019. This reflects a 12% increase on last year’s figures and brings the total number of visas to 9,123.

The US and Hong Kong are the remaining two largest source countries of students to the UK, with 14,987 and 9,095 visas granted in the year ending September 2019.

The countries are stable with +1% and -1% granted visa changes, respectively.

Matt Durnin, global head of Insights & Consultancy at British Council noted that the year-on-year growth is beginning to return to peak figures in 2009.

“This is our first good look at what recruitment has looked like in 2019,” he said.

It’s a very positive story, he explained, adding that overall he expects “just under 20% year-on-year growth”.

“With a stronger post-study work offer we are going to see even more [growth],” Durnin said. However, he challenged whether it is was “the right growth” for UK institutions.

“The question is, who is that going to benefit? And is it? What does concern me a bit is across all of the major English speaking study destinations, we do see a softening of admissions criteria.”

Other nationalities which do not feature in the top five sending countries have seen a 4% rise, bringing the total to 93,437. 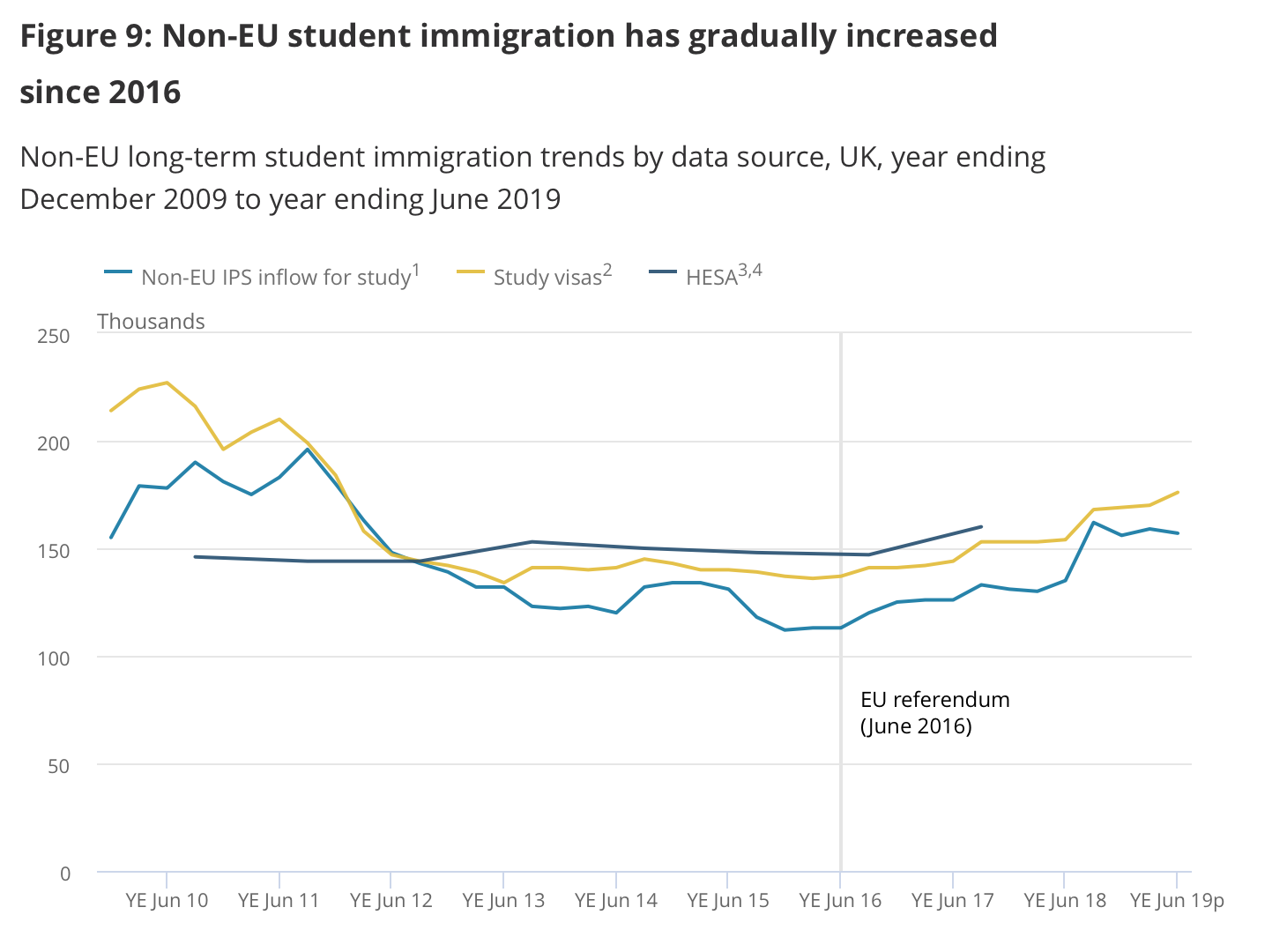 “There were a couple of bright spots in Indonesia and a much more positive story from Vietnam. We have seen over the years, for South Asia, India is definitely back. And it’s going to grow tremendously next year as well.”

Study at higher education institutions represents 86% of the total of those on Tier 4 visas. According to the UK government, sponsored study visa applications for universities increased by 14% to 222,047, making it the highest level on record.

“The continued increase in the number of international students choosing to study in the UK is evidence of the quality of our education sector and the experience it offers to those coming from overseas,” UKCISA chief executive, Anne Marie Graham said.

“It also shows how campaigns such as #WeAreInternational are critical to the success of the international education strategy, ensuring we attract students from all countries and regions as well as maintaining the numbers of students from China and India.”

With partnerships across a range of UK universities including the University of Aberdeen, Lancaster, and Durham among others, pathway provider Study Group sees the indicated jump as “extremely promising”.

“While America has traditionally been the most popular international location for Chinese students, the ongoing US-China trade war and controversies on US campuses have driven many Chinese students to UK universities instead,” said Study Group UK and Europe managing director, James Pitman.

“Similarly, in Australia, increasing hostility towards Chinese students is encouraging many to look to the UK.”

Echoing Durnin’s comments, Pitman lauded the announcement of the re-introduction of the UK post-study work visa.

“[The announcement] has also contributed significantly to the sudden boost in students from India who had previously been applying to Australian institutions,” he said.

In both China and India, Study Group has “robust sales and marketing teams on the ground”, and the latter country has the potential to be the second-largest source of international students in the world, he added.

“It is great to see that the government is reversing policies which previously positioned the UK as unwelcoming of international students,” Pitman observed.

The “positive recruitment environment” for UK universities will mean universities will “be able to alleviate financial pressures and provide cultural and diversity benefits on campus by opening their doors to a wider range of international students”, he concluded.