The UK remains the top destination for parents choosing a boarding education for their children, according to research by the Boarding Schools’ Association.

About Kim Martin
Kim graduated with a degree in French, Journalism and Creative Writing from the University of Strathclyde in Glasgow. She spent her year abroad in Paris, France as part of the Erasmus Exchange Program where she worked as an English Language Assistant for the British Council and has since championed student mobility and cultural exchanges. Kim tries to visit France as much as possible to practise her French and she loves all things to do with French culture, particularly literature and music.

The report, produced in partnership with BSA, British Association of Independent Schools with International Students and Chinese education specialist Connexcel, built upon similar research from 2021. This year, it collated survey responses from 1,100 Chinese families with children currently boarding at UK schools or registered to begin boarding in the next two years – approximately 23% of the total number.

“It has a long and proud tradition of welcoming international students, from China and across the globe, and we’re delighted this study indicates that if schools continue to meet parents’ and students’ needs, this will continue to be the case,” he continued.

Some 96% of prospective parents surveyed chose the UK as their preferred study destination for their child.

According to Fletcher, the results of the survey demonstrates “beyond doubt the confidence Chinese parents have in British boarding”.

However, the report highlights that other areas have seen an increase from last year which may be a signal that parents are now exploring other destinations post-pandemic. For example, the US continues to be the second choice study destination and according to the report, has seen a 20% increase for both pre-university and university entrance. 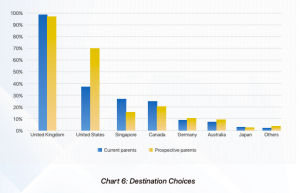 The report found that the overwhelming reason that Chinese parents choose to send their children to study in the UK is the opportunity of a more “well-rounded” education than is available in China. While last year, 77% of respondents said this was the case, in the latest research it increased to 85%.

In a survey asking what matters most to parents, the overwhelming majority voted that the quality of education their child receives and the security and safety of the country are the more important factors. A further 44% highlighted a country’s openness to international students.

Other key findings show how much parents value the work of a high-quality agent to aid them in finding the right school for their child as 85% of those surveyed felt the most important source of information when choosing a school came from educational agents.

The report also highlights that 80% of Chinese families make their application to UK boarding schools through an agent, which is an increase of 15% from last year.

The report stated that, “Finding the right agent is essential, both for the school and the parent. Experience suggests there are no shortcuts and good agents attract suitable families for specific schools.

“There are dangers in working with unproven or inexperienced agents. Schools need to beware of agents who charge high fees and attract parents who lack judgement,” it added. 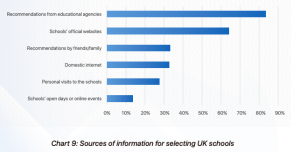 “There are dangers in working with unproven or inexperienced agents”

Caroline Nixon, international and membership director at BSA and director of BAISIS, said, “Overall their responses are extremely positive and the problems experienced by those children and their families as a result of the pandemic have done very little to dent their enthusiasm for British education.

“The many benefits of boarding education in the UK, ranging from portable qualifications which open the door to entry into top universities in any country in the world, to excellent pastoral provision, to networking opportunities, to increased confidence and independence, still exist,” she added.