Applications from non-UK students for higher education courses in the UK increased by 5.2% this cycle over 2018 to reach a record 140,955, according to the latest Universities and Colleges Admissions Service report. All in all, a total of 76,905 of those applications were accepted, marking an increase of 3.8% over the previous year.

China, in particular, has seen 25.7% growth in applications over the last cycle

According to the report, the government’s target of 600,000 international students studying in the UK by 2030  combined with the imminent arrival of a new post-study work visa may help stimulate growth in HE sector in the coming years.

“Another factor which may have stimulated growth in the number of non-UK applicants is the changing exchange rate between the sterling and other currencies making the UK an attractive location for HE,” the authors explained.

According to the report, several countries in Africa have been identified as emerging markets for UK universities and colleges. 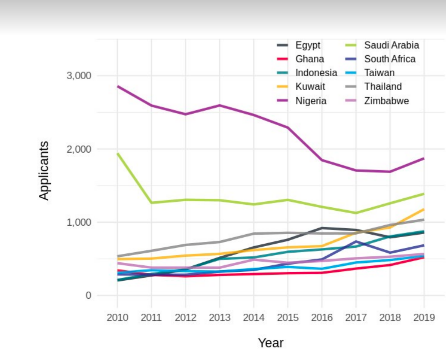 The top ten countries in terms of percentage growth of applicants to the UK from 2018 to 2019 (minimum 500 applicants in 2019), excluding China and India. Graph: UCAS

The report noted that the Middle East as a source of applicants has also seen changes.

The largest numbers of international applicants continue to come from China and India, which account for 15.3% (21,505) and 4.8% (6,720) of non-UK applicants respectively.

China, in particular, has seen 25.7% growth in applications over the last cycle.

Meanwhile, the number of applications from both Kuwait and Thailand passed 1,000 for the first time. Taiwan also saw an increase of 11.6%, while traditional source countries such as Hong Kong saw a surprising decrease of 5.6% while Malaysia remained relatively stable.

“It is a risky strategy for universities to target a limited number of countries to recruit international students, as we have seen with the health crisis in China in recent months,” Rachel Hewitt, director of policy and advocacy at HEPI, told The PIE News.

“However it is also right that their approach should be demand-driven and it is clear the strongest demand is currently from China and India.

“It seems that already the post-study work visa has had a positive impact on the recruitment of international students, particularly those from India. This also demonstrates the significant impact that changes in government policy can have on recruitment,” Hewitt added.

Applicants from within the EU – whose major source countries include France, Italy, Poland, Spain and Ireland – have remained stable but numbers remain lower than before the 2016 EU referendum.

Notably, 35.5% of EU applicants applied to study in Scotland, most likely due to the fact that the Scottish government currently subsidises the fees of Scottish and EU students.

As with previous years, non-UK applicants strongly preferred London over other regions, with international students nearly twice as likely to apply to at least one university or college in London compared to those applying from the UK.

According to the report, 54.1% of applicants from outside the UK used one of their five undergraduate application choices for a course based in London last year, compared to 27.8% of UK applicants.

However, the UK is not always the only place that international students apply to study.

“UCAS surveys applicants about their application choices, and is able therefore to provide insight into the range of destinations they may be considering,” explained the report.

Almost four out of 10 also apply to study in their own country, while 36% of EU students and 48% of non-EU ones apply to other countries, most commonly the US and Canada.

38% of Chinese applicants additionally apply to study in Hong Kong.

Those applying through agencies experienced higher acceptance rates (59.9%) than the 45.7% of applicants that applied independently (48% were accepted) or through overseas schools (53.8%).

“Our most detailed insight ever into international students’ choices further proves the high regard our higher education sector is held in around the world,” said Clare Marchant, UCAS’ chief executive.

“While the draw of studying in the capital is clear, our analysis of emerging markets and students’ subject preferences will be invaluable to universities across the country in planning their teaching and recruitment activities,” she added.