Posted on Mar 29, 2019 by Kerrie Kennedy
Posted in News, under Asia.
Tagged with English language, Japan, Tokyo.
Bookmark the permalink.

A Japanese nonagenarian has set out to prove that it is never too late to learn a language as she bids to conquer the English language before the Tokyo Olympics take place in 2020.

Setsuko Takamizawa, who will be 92 when the Olympics return to Tokyo in July next year, said she was prevented from learning what was considered the “enemy language” in her youth.

“English was banned because it was the enemy language”

Takamizawa is one of more than 200,000 people who applied to volunteer at the Olympics and Paralympics, and although it is not a mandatory qualification, the ability to speak English is skill organisers said they are looking for.

“When I was a freshman at a girl’s senior high school, World War Two broke out,” Takamizawa told Reuters.

“In my second year there, English was banned because it was the enemy language.”

Takamizawa said her grandchildren convinced her she was not too old to learn.

“I want to encounter various people with various cultures”

“I don’t speak English at all… so when I talked to my grandchildren they said, ‘it’s not too late. We will teach you one word a day.’ That’s when everything started.”

According to Olympics organisers, fewer than 1% of the applicants to the volunteer program are over the age of 80. 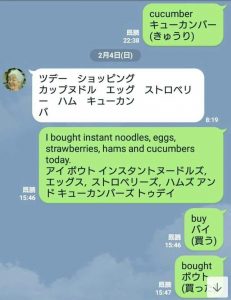 Takamizawa learns English from her granddaughter via a messaging app. Image: Japan Times

Takamizawa said the ability to speak passable English will help her share stories with people from around the world.

“What I want is not only a chance to speak English but also I want to encounter various people with various cultures and values by using English as a tool,” added Takamizawa.

“That would be the best.”