Posted on Aug 28, 2019 by Claudia Civinini
Posted in News, under Global.
Tagged with international schools, ISC Research.
Bookmark the permalink.

English-medium international schools enrol 5.6 million children around the world – up from 969,000 in 2000 – and all signs point to sustained global growth for the sector, the latest report by ISC Research has revealed.

Demand is particularly high in Asia

“A few countries have a serious shortfall, particularly China and Hong Kong”

Demand is particularly high in Asia, but the research has highlighted several countries where significant growth is expected over the next few years.

“International school development in most countries is expanding at sufficient pace to satisfy the increasing demand for places, but a few countries have a serious shortfall, particularly China and Hong Kong,” Richard Gaskell, ISC Research schools director, told The PIE News.

“There are several countries where, in the near future, demand is expected to grow beyond current capacity.

“These include Malaysia, Vietnam, Japan, Saudi Arabia, Qatar and The Netherlands. All signs suggest that the rate of global growth of international schools will continue,” he added. 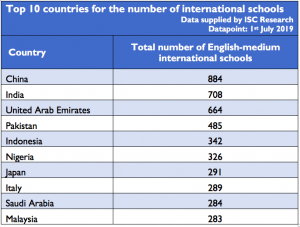 The report suggested that over the next decade, the number of enrolments will reach 2.5 million in Western Asia, over a million in Eastern Asia and 851,000 in South-Eastern Asia.

Several countries are expected to see significant growth in the near future, according to the research.

On the list of the countries to watch, Saudi Arabia looks promising thanks to education becoming an emerging sector for foreign investment, while Qatar’s National Vision for 2030 could boost demand for international education in the country.

However, in Malaysia, the research shows, the current international school provision is not keeping up with the pace of industrial and residential growth in certain areas. 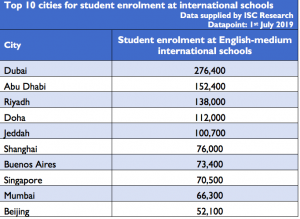 Many of the international schools in Japan, the report relayed, are experiencing excellent enrolment growth and more development “is likely”.

US and Australian independent schools are slowly catching up, and there is evidence that development is now increasing, the report explained.