UK education stakeholders are seeking to clarify rules for incoming students from India, after the British government added India’s Covishield program to its approved vaccines for travel.

The UK has issued 65,000 visas for students from India for this academic year

According to UK government information, as of 4:00 am October 4, travellers fully vaccinated by an approved program in Europe or the US will no longer be required to quarantine on arrival in the UK.

Moderna, Oxford/AstraZeneca, Pfizer/BioNTech and Janssen vaccines are all among the approved vaccines. But there is confusion as to whether Indian students vaccinated under India’s Covishield program – which uses the AstraZeneca vaccine – will be eligible to bypass the 10-day quarantine period when arriving in the UK.

“There’s definitely something that needs to be worked out here”

While the UK said on September 22 that AstraZeneca Covishield qualifies as an approved vaccine, India is not featured in the list of relevant public health bodies to qualify as fully vaccinated.

Although stakeholders did not necessarily expect any announcements to change circumstances for students arriving for the start of term before October 4, they were expecting it to allow fully vaccinated arrivals from India to avoid quarantine requirements. 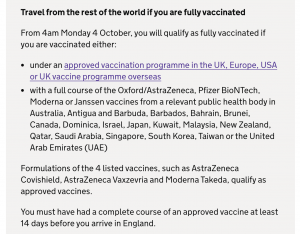 It is understood that the announcement applies to Covishield vaccinations given in the listed countries, along with those in the UK, Europe and the US.

“Although they’ve now accepted it as a vaccine, India still has not been moved onto the accepted country list,” said Sanam Arora, founder and chairperson of the National Indian Students and Alumni Union UK.

The implication, Arora noted, is that “there is fundamentally no change to the situation compared to yesterday, other than the fact that at least they’re recognising the vaccine now”. Students arriving from October 4 and vaccinated with the AstraZeneca as part of the Covishield program will still have to quarantine for 10 days.

The UK has issued 65,000 visas for students from India for this academic year, up 30% on last year, according to UK high commissioner Alex Ellis.

Other leaders in the sector The PIE spoke to suggested not allowing fully vaccinated Indians to avoid quarantine could be oversight on behalf of the government. Authorities may need to clarify further on guidance, which is “a little bit conflicting”, they said.

Providing advice to students is difficult at this stage, as the guidance from government is not clear itself, Arora indicated. NISAU runs some 60-70 groups on WhatsApp where students are under the impression that Covishield is accepted and they can now travel to the UK quarantine free, she continued.

“Actually that’s not the case, not right now anyway. So we’re having to sit here, send out clarifications to tell people to hold on and wait until some further clarity comes out.

“There’s definitely something that needs to be worked out here because now trying to tell people to hold their horses, not get too excited about this information… Full information is not available.”

The lack of clarification causes “distress, confusion, misinformation”, she added. And certain cohorts of students may have felt discriminated against.

Before the UK updated its rules to recognise Covishield, students from India were treated differently to students other countries on the amber list.

The move from the UK has been described as “offensive”, “bizarre” and “smacking of racism”, but Arora is quick to emphasise that, despite the policy being discriminatory, it not racist.

“There is this feeling at large that has been perpetuated in India that the UK is being racist, quote unquote, towards Indians,” she said. However, unclear messaging and communication could have risks for the UK sector.

I have been saying for months & have said so again – for 2 countries that have elevated their status to Enhanced Trade Partnership & are now working towards a Free Trade Agreement, it is utterly bizarre that we have not authorized #covishield already. UK is NOT racist… 1/2 https://t.co/P0wX3hPIwa

“Stakeholders across the UK in higher education in particular, have worked exceptionally hard to make the UK a very welcome place for Indian international students. My worry is that moves such as this… risk reversal of all that they have worked so hard for, particularly over the last decade.

“All the numbers that we’re now seeing of Indian students coming to the UK, it risks reversal of all of that good work if we then send a messaging consciously or subconsciously, that implies we’re a racist country or that implies they’re going to be discriminated against, [which is] absolutely not true.”

At the time of publication, the UK department for transport had not provided further clarification.

A UK government spokesperson confirmed that individuals not vaccinated in a recognised country still have to take a pre-departure test, pay for day 2 and day 8 PCR tests after arrival in England and self-isolate for 10 days, although with the option to test to release after five days.

“As part of our recently expanded inbound vaccination policy, we recognise the following vaccines Pfizer BioNTech, Oxford AstraZeneca, Moderna and Janssen (J&J), for the purposes of international travel. This now includes the formulations AstraZeneca Covishield, AstraZeneca Vaxzevria and Moderna Takeda,” they said.

“Our top priority remains protecting public health, and reopening travel in a safe and sustainable way, which is why vaccine certification from all countries must meet the minimum criteria taking into account public health and wider considerations.

“We continue to work with international partners, including India, to roll out our phased approach.”

One Response to Quarantine confusion as UK approves Covishield vaccine