Posted on Nov 9, 2018 by Amy Baker
This entry was posted in Agencies, News. Bookmark the permalink.

The “pathway business” is becoming increasingly sophisticated and diversified, as education companies such as Navitas are developing new ways of working with universities, building up services such as managing overseas campuses, or helping universities with domestic recruitment.

Meanwhile, successful education agencies are keen to shift their business strategy to increasingly focus on career and life planning for their student clients, and they value interactions with universities and education companies that help inform this agenda.

These were key insights from the Navitas Business Partners Conference, which was held this month in Colombo, Sri Lanka, enabling Navitas’ global network of staff to interact with education agent partners from around the world and its university network.

CEO of Australia’s listed company Navitas, David Buckingham, opened the conference by considering the future looming changes to society, with the jobs of tomorrow not invented yet and a shift to a “gig economy” all posing challenges and opportunity to higher education. 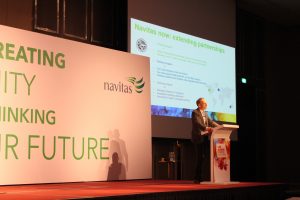 Working closely with universities would help realise opportunities as the world really geared up to lifelong learning, he said, and achieve Navitas’ vision of “preferred transformation partner”.

He pointed to new developments at Navitas – its move into the Netherlands (working with Twente and The Hague University), its new joint-venture style partnership in the UK (with Swansea University; its first investment into infrastructure) and its multi-faceted relationship with Curtin University, which includes integrated marketing and managing its overseas campus in Singapore.

Navitas is building out this part of its business, taking over the operation of Australia’s Murdoch University Dubai campus in January 2019.

Paul Lovegrove, CEO of the university partnerships division at Navitas, told The PIE News, “We’re developing our pathway model beyond pathway, so looking at some of the stuff we do around managed campuses, transnational education, direct recruitment, and trying to fit that together with [university] strategies which are also emerging.”

He said a clear success of the week had been ” really authentic, robust dialogue about challenges that universities are facing”.

Speaking about a shift towards helping universities with domestic student recruitment, Lovegrove said that Navitas was working with Anglia Ruskin and Brunel in the UK on direct recruitment and had developed a new business foundation pathway also focused on domestic students for Swansea University.

He prefaced this by noting, “It will always be that we’ve got to deliver our targets and our commitments around international students and then there might be an opportunity for [domestic] students to go through that pathway.”

Lovegrove noted that some institutions are becoming aware that, “over time, some of [the Australian colleges] have developed a pretty sizeable domestic [pathway] offering. And the benefit obviously is that international students can mix more actively with domestic students and not feel as if they’re slightly ghetto-ised so there’s a win-win.”

He also nodded to the new academic building and accommodation block opening in Swansea as part of the JV – “It’s the first time Navitas globally has invested in infrastructure and I think it’s the best building we’ve got – on the beach in Swansea.” 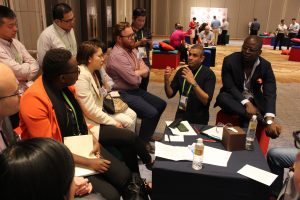 Delegates were frequently in break-out groups to share their challenges

Entitled “Re-imagining partnerships”, the three-day event focused on being interactive, making delegates discuss with each other what they’d like to see happen to make their business lives easier, or more effective, or to make students’ journeys more successful.

There were many ideas raised: big picture plans such as improving student mobility possibilities between the Navitas university network as well as granular ideas such as stratified marketing collateral, aimed at students with different levels of knowledge about studying overseas.