Student placement agencies or migration agents that have faced disciplinary action and had legal troubles are recruiting international students for universities and colleges around the world, The PIE News has learnt.

After our investigation, a number of education institutions have taken steps to terminate agreements with recruitment partners or revealed that publicised partnerships are in fact expired trading agreements.

Using data and research carried out by due diligence provider AgentBee, The PIE discovered a number of agents who have had licenses revoked by professional bodies and who have been investigated by governmental authorities.

As evidenced in a global directory maintained by AgentBee, Sai Overseas Education has been investigated for tax evasion, the former MD of Evaa committed professional misconduct and the principal of STG International Service Group Pty Ltd had their registration as an migration agent canceled by Australian authorities.

Despite this, all three agencies appear to be continuing to work in a recruiting capacity for universities and institutions around the world.

“The impact on students is the key consideration. Unprofessional or dishonest education agents can cause huge emotional and financial problems for students and their families,” Sarah Williams at AgentBee told The PIE.

“If a student deals with an agent who is an authorised agent of a given institution and has a bad experience, that is a problem for the student and the institution.”

Williams said that the affected student is naturally going to ask why the institution recommended the agent, potentially leading to reputational damage. In some jurisdictions there are also regulatory and compliance considerations.

“Institutions in Australia, New Zealand and Manitoba must terminate agreements with any agency if they reasonably believe the agent has behaved dishonestly,” Williams added.

“The agent is not a person of integrity, or is otherwise not a fit and proper person to give immigration assistance”

On June 30, 2021 Teng Zhao, the principal of Australia-based STG International Service Group Pty Ltd had his registration as a migration agent canceled by the Office of the Migration Agents Registration Authority.

“The agent is not a person of integrity, or is otherwise not a fit and proper person to give immigration assistance,” the authority said as part of its decision.

On 22 November 2021 Huan Huang, an employee for STG from the time she was first registered until July 2021, also had her registration as a migration agent canceled.

The PIE contacted STG for comment multiple times but did not receive a response by the time of publication.

A web search on November 16, 2021 showed that there were 15 Australian institutions who listed STG as an authorised agent.

The PIE contacted these institutions to ask if they were aware of the fact Zhao had had his registration canceled.

A number told The PIE that they would take action after learning of the Office of the Migration Agents Registration Authority’s decision.

“On learning about the serious and significant misconduct of agents in the migration division of STG International Services Group, we have ended our contract with STG with immediate effect,” Tony Cullen, EGM Global Engagement at Navitas told The PIE.

“This action is in line with our Agent Management Policy which demands the highest professional and ethical standards from our agent partners.”

Cullen added that Navitas “undertakes a rigorous due diligence process before signing contracts with new agents”.

Another institution that listed STG as an authorised agent was Genazzano FCJ College in Melbourne.

“Once this matter was brought to our attention, we did some research, contacted PRISMs and terminated our Agreement immediately, as per the clause in our signed Agreement,” a spokesperson for the college told The PIE.

“It is our goal to recruit students in an ethical and responsible manner so that students who come to study in Australia are prepared for their student experience and are enrolled in appropriate courses that foster deep learning and engagement.”

As well as being listed as an authorised agent by numerous institutions, STG sponsors a scholarship for students going to Monash University in Melbourne, which is ranked by THE as the 57th best university in the world as of 2022.

“STG International Service Group P/L is not a Monash education agent,” a spokesperson for the university told The PIE.

“At the time STG International Service Group was registered as a migration agent. Any offers of gifts to the University must comply with the University’s Gift Policy, before they are accepted,” the spokesperson added.

A report from The Times of India in October 2021 found that immigration consultant Sai Overseas Educational Services, based in Jalandhar, Punjab, was raided by tax department investigators.

According to Times of India sources, raiding teams obtained information in digital and documentary form pointing towards “huge tax evasion” and the modus operandi of the company included “concealing the actual amount of fees and charges received for their clients”.

Sai Overseas Educational Services did not reply to The PIE’s requests for comment.

The PIE contacted the 24 institutions listed under the UK section, with the majority saying that they had no relationship with Sai Overseas Educational Services and that they had requested that their names be removed from the company’s website.

However some said that Sai Overseas was an authorised agent for their institution.

“Like most UK universities, Middlesex works with student recruitment partners all over the world,” a spokesperson for Middlesex University told The PIE, adding that Sai Overseas had recently recruited for the institution.

“Before we begin a partnership we go through a vetting process. This includes receiving two references from universities the agency already works with and reviewing the arrangements on an annual basis.”

“We expect our partners to adhere to all the relevant laws and practices of whichever country they operate in. Allegations to the contrary will be highlighted during the review process,” the spokesperson added.

Other providers such as the University of the West of Scotland told The PIE that a previous agency agreement with Sai Overseas expired in August 2020 and was not renewed.

Stephanie Harris, acting assistant director for policy and global engagement at Universities UK International, told The PIE that education agents play an important part in the student recruitment process, not only from a university perspective, but also for students.

“The majority of education agents that universities work with are trusted and valuable partners. The sector has been working with the Home Office to share information, ensuring quality and compliance in this area,” she said.

Harris explained that this guide will provide advice on appointing, contracting and managing international recruitment agents.

“It documents the substantial best practice that there is in the sector. UUKi will continue working with BUILA and UKCISA to liaise with stakeholders across the international education sector in developing this agent quality framework.”

Students in doubt whether an agent is an official agent of a university should check the university website or to contact the institution, she added.

“Students may also want to consider whether the agent has undertaken any relevant training, such as the British Council education agent training program, when selecting an agent to support them.”

On May 19, 2021, the Discipline Committee of the Immigration Consultants of Canada Regulatory Council found that Baljit Singh Kailay committed professional misconduct in breaching several articles of the ICCRC’s Codes of Professional Ethics.

According to Baljit Singh Kailay’s LinkedIn profile on November 25, 2021 (and now deleted) he was the managing director of Evaa Immigration at that time. 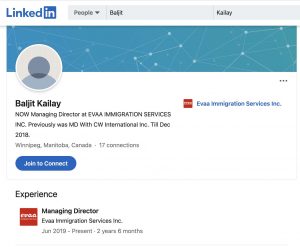 The PIE identified 73 institutions based in Canada that Evaa was listing through a course search tool on its website.

All of the universities who replied to The PIE said that they had no connection with Evaa.

The current director of Evaa Immigration Services, M.K. Luthra, told The PIE that Baljit Singh Kailay had already resigned from his position and is no longer associated with the company in any capacity.

When The PIE asked Evaa why Baljit Singh Kailay’s LinkedIn profile said he was still the managing director of the organisation they said it would be changed soon. The LinkedIn profile was subsequently taken down.

Evaa told The PIE that they have a new team of ICCRC members to serve students to the “best possible standards”. When The PIE asked Evaa for details of these ICCRC members they did not reply.

Are institutions properly vetting the education agents they work with?

AgentBee’s Williams explained to The PIE that most institutions do basic due diligence before agreeing to work with a new agent.

“What if an offshore agent is subject to a criminal charge for fraud in their home country?… it’s been difficult for institutions to have visibility of that”

She said that typically that involves assessing information that the agent submits in a new agent application form, and seeking references from other institutions that the agent represents.

“In that process, professional memberships and accreditations are helpful indicators of agent professionalism.

“Beyond that, the ability to undertake further due diligence has previously been limited by lack of data on agent conduct and performance – both quantitative and qualitative.”

AgentBee offers an agent background checking solution that seeks to fill that gap, she said.

“Ongoing due diligence on education agents is also critically important, but approaches vary widely between institutions. Some institutions do it by regularly assessing the data they collect on their own agents but that is a narrow frame of reference,” said Williams.

“What if an offshore agent is subject to a criminal charge for fraud in their home country? What if an onshore agent receives an official sanction from a regulator for unprofessional conduct? Again, it’s been difficult for institutions to have visibility of that.”

Williams argued that institutions need good systems and processes in place to do due diligence on new agents before entering into an agreement with them, and ongoing due diligence over the life of the relationship with an agent.

“To do that institutions need access to data. The agent performance data that an institution collects itself is important but is only one part of the story,” she said.

“The data on education agent conduct and performance held in AgentBee’s database enables institutions to get a better understanding of new and existing agents in order to support better decision making and risk management,” she added.