Posted on Aug 31, 2018 by Kerrie Kennedy
Posted in News, under Asia.
Tagged with fees, IITs, India, Institutes of Technology.
Bookmark the permalink.

India’s Institutes of Technology will cut fees for international students and push to recruit foreign academics and teachers to permanent roles in a bid to expand their talent pool and boost their global rankings.

The fee sits at about US$8,457 per year, or three times that of Indian students

The announcement was made at a meeting of the IIT Council where it was decided to allow individual IITs to selected the fee for international students.

Currently, the fee sits at about US$8,457 per year, or three times that of Indian students.

Outside of cultural exchange fellowships, international students have only permitted to study at IITs since 2016 when a decision was made to allow such students to sit the Joint Entrance Examination, the mandatory test taken in order to enter IITs at undergraduate level.

The move was expected to help improve the global ranking of IITs, as international students are one of the biggest parameters for rating universities.

At the meeting, however, ITT Council members said the fees that international students are expected to pay is “not competitive enough”.

Sarit.K. Das, director of IIT Ropar, said higher fees are “working as a deterrent [to] bringing in foreign students”.

“We are looking to attract quality students from middle and low-income countries in Asia and Africa. You can not charge very high fees. We are not looking to make a profit but to promote diversity,” he told the Council.

The Council also decided that it would seek a relaxation to the Citizenship Act to allow the IITs to recruit foreign teachers as permanent faculty members. Currently, the legislation denies permanent roles to international workers in public institutions.

As many as 300 (40%) of faculty positions are vacant in IIT-Delhi alone. If all the IIT campuses are considered, the vacancies are said to add up to about 5,000.

The announcements follow a series of positive policy changes in India aimed at international students, including newly designed courses, fee waivers and the launch of the Study in India web portal as part of a government campaign committed to welcoming 1 million inbound students.

In July 2018, it was announced that IIT Delhi would fully-fund PhD scholarships to international students to improve its global outlook and “enhance the institute’s research and development”.

According to Department of Higher Education figures, a total of 46,144 students from 166 countries studied at Indian HEIs during 2017-18, with 63.4% hailing from just 10 countries and Nepal constituting 24.9% of the total. 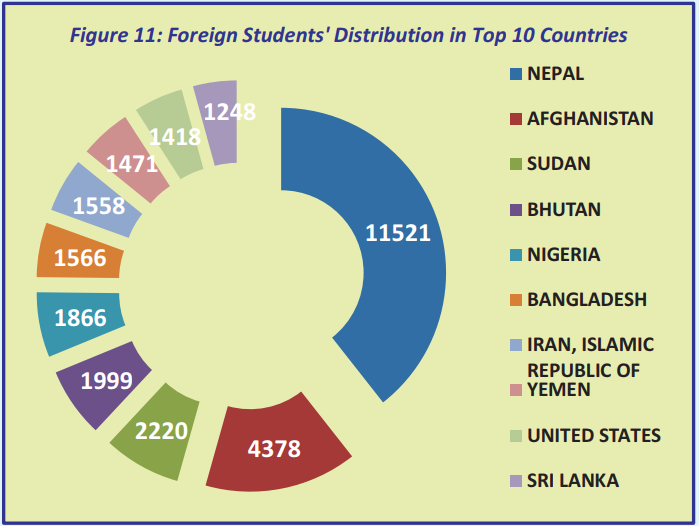 Executive director and head of education at Sannam S4, Lakshmi Iyer told The PIE News the decision should help IITs to attract the top international students from South Asian and African countries, in particular.

However, Iyer added that IITs will also need to build a sustainable infrastructure for internationalisation and a establish a “deliberate focus” in order to be successful.

“Since the highest number of foreign students in India are currently enrolled in undergraduate programs, IIT Council’s decision would help to attract students mainly to IITs’ BTech programs,” she said.

Outside of tuition fees, Iyer explained, the lack of adequate institutional support had always been a deterrent to attract foreign students to public institutions in India.

“But on the other hand, many private universities and professional colleges in India have been very successful in attracting foreign students by offering affordable fees and excellent support services to even small towns and cities like Pune, Manipal and Coimbatore,” she added.