IDP, the global education agency which also owns Hotcourses and IELTS Australia, has added the Republic of Ireland to its list of destination nations prospective international students can choose from. Ireland boosts the Australian company’s European offering, which also sends students to the UK, the US, Australia, Canada and New Zealand.

“Republic of Ireland was the logical next step in our strategy”

This is in addition to the news strategic partnership deal between IDP and UCD.

According to IDP’s CEO, Andrew Barkla, the move into the Irish market was “the logical next step” in the firm’s strategic plan.

Asked if the decision was Brexit-related, Barkla told The PIE News that Ireland’s draw as an anglophone destination with a well-regarded HE system was more of an influential factor.

“Launching student placement services for Ireland aligns with our strategy of increasing the options available for IDP customers aspiring to study in popular English-speaking education destinations,” he said.

“The Republic of Ireland was the logical next step in our strategy due to its high-quality education system and welcoming study and career pathway policies.”

“While we haven’t ruled out non-English speaking study destinations in the future, our current strategy prioritises English-speaking countries,” Barkla added.

As well as a logical step an anglophone market with a strong HE market, Barkla told The PIE that data from IDP’s subsidiary company Hotcourses informed the decision.

“Search activity data… allows us to see trends and market opportunities around the world. Tellingly, search interest in Ireland across the Hotcourses’ international sites has more than doubled since 2016,” Barkla revealed.

In 2018 Ireland was recorded as the seventh most popular study destination by the Hotcourses Group International Survey. 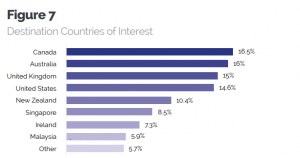 IDP acquired the UK-based Hotcourses Group in January 2017 for £30 million.

The Australian company added the deal with UCD was not incidental, but “part of a targeted client acquisition program”.

“In addition to this, we are in advanced discussions with a small group of high quality universities and institutions that have a strong fit with IDP’s vision, values and the needs of our customers.”

University College Dublin president Andrew Deeks said the move was in line with UCD’s aims as a globally-facing HEI.

“As Ireland’s Global University, we bring the best of the world to Ireland and the best of Ireland to the world,” he stated.

IDP expects its first cohort of students to commence their studies at UCD in September 2019.