Posted on Jul 7, 2020 by The PIE News team
Posted in Covid-19, News, under North America.
Tagged with ACE, Coronavirus, ICE, US, USA.
Bookmark the permalink.

Sector stakeholders and US institutions have expressed widespread concern at new Student & Exchange Visitor Program guidance that prohibits international students from returning to or remaining in the US if their institution adopts an online-only instruction model for the fall.

"We call on ICE to reverse course and provide greater flexibility"

Institutions are pledging support for the thousands of students impacted by the announcement: Harvard University posted a statement explaining that it was “deeply concerned” that the guidance imposes a “blunt, one-size-fits-all approach to a complex problem”.

“[It gives] international students, particularly those in online programs, few options beyond leaving the country or transferring schools,” the statement continued.

Harvard – which plans to teach all of its undergraduate programs virtually in September even if students reside on campus – wrote that the guidance “undermines the thoughtful approach taken on behalf of students by so many institutions, including Harvard, to plan for continuing academic programs while balancing the challenges of the global pandemic”.

The Ivy league institution said it would work closely with other institutions to chart a path forward. “We must do all that we can to ensure that our students can continue their studies without fear of being forced to leave the country mid-way through the year.”

President of NYU Andrew Hamilton said that although the new regulations may not affect many of its international students thanks to the university’s planned hybrid program for fall, it “will be disruptive to some who will now be forced to rethink their fall schedules to ensure they include live classes”.

“Requiring international students to maintain in person instruction or leave the country, irrespective of their own health issues or even a government mandated shutdown of New York City, is just plain wrong and needlessly rigid,” Hamilton said in a statement.

“If there were a moment for flexibility in delivering education, this would be it.”

Executive director of the Presidents’ Alliance on Higher Education and Immigration, Miriam Feldblum, said that the guidance serves only to undermine international student educational attainment and harm the nation’s ability to attract and retain global talent.

She said the rule would unduly pressure institutions that are already experiencing fiscal strains and uncertainty to “prematurely open in-person courses or else risk losing invaluable student enrollments and contributions”.

“We call on ICE to reverse course and provide greater flexibility; and for Congress, through forthcoming appropriations or legislation, to direct the reversal of this problematic and harmful policy,” Feldblum added.

For schools offering a hybrid model, international students will be able to take more than one class or three credits online, but institutions will need to certify that the program is not entirely online, and that the student is taking the “minimum number of online classes” required to make normal progress in their degree program.

In a recent letter to the departments of State and Homeland Security, the American Council on Education and 38 other associations had requested continuing flexibility on guidance issued concerning international students.

“We respectfully request that DHS extend and/or expand prior guidance to continue providing regulatory flexibility for international students enrolled at our institutions of higher education in the upcoming 2020- 21 academic year and participating in coursework through various alternatives either inside or outside the US,” stated the letter signed by ACE president, Ted Mitchell.

But Mitchell wrote that this latest guidance “takes the opposite tact”, calling the move “horrifying”.

“While we would welcome more clarity about international students studying in the United States, this guidance raises more questions than it answers and unfortunately does more harm than good,” Mitchell said in a statement.

“At a time when institutions are doing everything they can to help reopen our country, we need flexibility, not a big step in the wrong direction.

“We urge the administration to rethink its position and offer international students and institutions the flexibility needed to put a new normal into effect,” he concluded.

Speaking to The PIE News, Jason E. Lane, dean of the school of education at the University at Albany, described it as a shocking announcement – especially as international students are already faced with significant hurdles such as limited flights and closed embassies.

“Now they have to worry that if they cannot get courses on-campus or if their college or university shifts back to fully remote learning due to a spike in the pandemic that they will be forced to leave the country,” he said.

“This decision will likely push even more students to delay the start of their studies or look to study in a country with more friendly policies toward international students.” 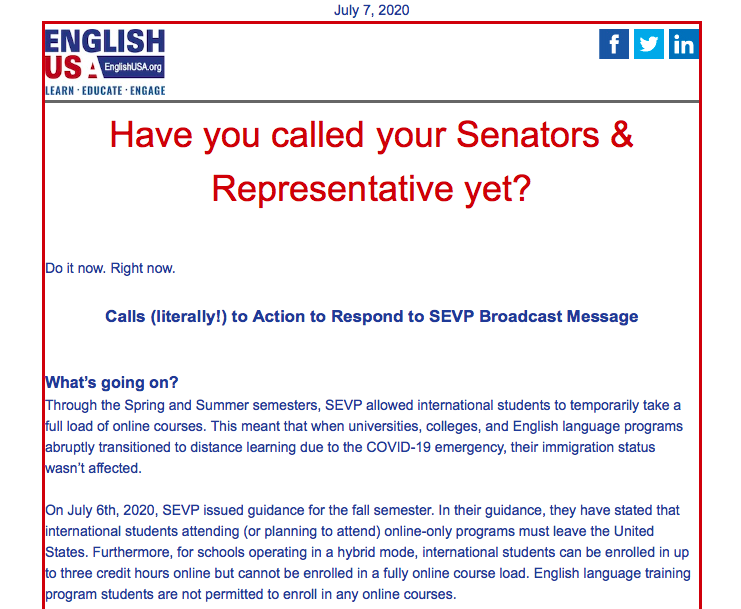 EnglishUSA is urging all of its members to write to those with political power to amend the guidance.

Educators also took to social media to air their views on the new guidance, with some calling it an attempt by the Trump administration to force universities to reopen more broadly in the fall.

Let’s be real. This gov’t tactic has little to do with immigration but rather strong-arm universities to fully open. As usual, internationals treated like pawns. https://t.co/G0DEgzFobb

At the University of Massachusetts Amherst, director of International Student & Scholar Services, Kenneth J. Reade, expressed disappointment at what he described as “poorly written and unsatisfactorily considered federal public policy on immigration”, and called on international students to not make any sudden decisions based on the guidance.

“The SEVP announcement is very much subject to change”

“The SEVP announcement is very much subject to change and there is an expectation that additional guidance or amendments are forthcoming in the days and weeks ahead,” he explained.

“UMass will do absolutely everything in its power to continue to make our Amherst and Mt. Ida campuses a safe place for you to continue your education…we value your presence and contributions… [and] we will get through these complicated times by supporting each other and working together,” Reade added.

Around one million international students attend US colleges and universities annually, yielding an estimated economic impact of $41 billion and supporting more than 450,000 jobs.