The figures from the Higher Education Statistics Authority, published today, show a 1% drop in first-year non-EU enrolments in 2015/16, with overall non-EU enrolments falling very slightly – by less than 1% – to total 310,575.

“The UK could be doing much better than this”

China remained far and away the biggest provider of non-EU students to UK higher education institutions, climbing to 91,215 in 2015/16.

Meanwhile, Malaysia overtook both the US and India to become the UK’s second largest non-EU student source country, as Indian student numbers continued to drop.

Nigeria, which was the UK’s third largest international in 2011/12, also saw a notable drop in incoming students. With numbers down 20%, it has now been overtaken by Malaysia, the US and Hong Kong, which saw the largest increase in student numbers in this year’s figures.

Overall enrolments from Hong Kong were up by 48% in the four year period, while first-year enrolments increased by 27%.

“The increase in student numbers from Hong Kong is good news but a drop in the ocean compared to the dramatic fall in Indian students coming to the UK,” Pam Tatlow, chief executive of MillionPlus, the association for modern UK universities, told The PIE News. 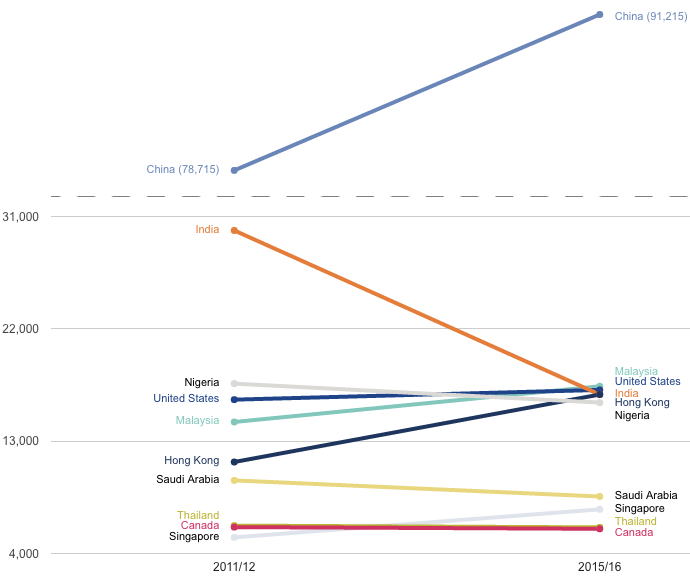 “The reasons for this decline are well-known and entirely down to government changes in visa regulations and in particular, the abolition of the post-study route which was very popular in the Indian market.”

The research also cites a number of statistics indicating international student numbers could fall slightly in the years to come.

Home Office figures show there were 3% fewer study-related visas granted in September 2016 compared to the year before, and that over the same year, the number of university-sponsored study visa applications fell by 1% to 167,208.

This is in addition to the statistics from UCAS released at the end of last year showing a dip in the acceptance rate for students from outside the EU for the first time in five years.

While non-EU student numbers declined slightly, the number of EU domiciled students at UK universities rose by 2%, from 124,575 to 127,440.

A sharp rise in incoming students from Italy, up 52% to 12,135 in four years, means it has climbed to become the third largest EU source country.

It has overtaken Ireland, which has fallen 32% in the same period, along with Greece and Cyprus, from which incoming student numbers have also declined.

“The UK could be doing much better than this,” she said, adding that the UK has “the potential to be one of the world’s fastest growing destinations for international students”.

“If the UK wants to remain a top destination for international students and academics, it needs a new approach to immigration that is proportionate and welcoming for talented people from across the world,” she urged.

“This will be even more important as the UK looks to enhance its place in the world post-Brexit.”​

The latest Open Doors report showed 7% growth in international students to the US in 2015/16, while Canada, Australia and China are all seeing strong growth.

“UK government and universities must work together to ensure that the UK doesn’t lose its leading position in an increasingly competitive environment, and with it, the benefits that international students bring to the UK, UK economy, UK students and UK universities,” Peak commented.