Leaders of 17 higher education institutions in New York State have written to the US government urging it to open consulates for F-1 student visa appointments and processing and allow officers to either waive in-person interview requirements or allow for online interviews.

One "high risk" institution, with 60% of its international cohort from affected and restricted countries, could expect a fall in $283m revenue fall

In the letter to US secretary of State Antony Blinken and secretary of Homeland Security Alejandro Mayorkas, university presidents and chancellors also suggest extending exemptions to travel restrictions for international students.

Currently, only students traveling from the European Schengen area, the UK and Ireland are exempt from travel restrictions to the US, they highlighted.

“We are concerned that many embassies and consulates around the world remain closed and therefore unable to process international student visas,” leaders of institutions including Columbia University, Cornell University, University of Rochester, University at Buffalo and Stony Brook University wrote.

“Given the average length of processing times, this is a matter of some urgency for international students who need to begin making plans to travel to the United States safely by the start of the next academic year.”

The problem is “particularly acute” in China, which represented some 34.6% of international students in the US in 2019/20, where F-1 visa processing services have been closed for over 13 months, they continued.

Institutions are also experiencing “significant delays” in India, which sent more than 193,000 students to the US in 2019/20, according to Open Doors statistics.

The US has already waived the interview requirement for the Temporary Non-Agricultural Workers H-2 visas, the letter highlighted.

“Given the fact that Chinese and Indian nationals comprise the largest cohort of international students in the United States, this issue is of paramount concern to us,” it explained.

Speaking at a Presidents’ Alliance and NAFSA action alert briefing, president of New York University Andrew Hamilton explained that the institution faces a “very significant threat” that students from China will be unable to return to the US.

A NAFSA Member Interest Group focusing on China previously warned that thousands of Chinese students may not be able to travel to the US this fall because of visa processing issues.

“We worry greatly that the embassies and consulates around the world will be unable to deal with the pent up demand for visas,” Hamilton said.

IIE data from 2020 revealed a 43% drop in new enrolments, and a SEVIS report in March found that new enrolments in the US fell by 72% and the total number of international students in the US declined by 18% in 2020, senior advisor at the Presidents’ Alliance, Rajika Bhandari, reminded.

Additionally, NAFSA estimated in May 2020 that US higher education could lose almost $3bn due to the decline in anticipated enrolments, she added.

“It’s worth looking at some other projections of how dire the situation is,” she said.

Analysis by Shorelight, presented in an online tool, shows that different types of US institutions face varying degrees of risk and vulnerability, she explained.

One “high risk” institution, with 60% of its international cohort from affected and restricted countries, could expect a fall in $283m revenue, she warned. Giving one example of a “low risk” institution – with 12% of students from affected regions – Bhandari said it could see an estimated economic impact of about $2m. 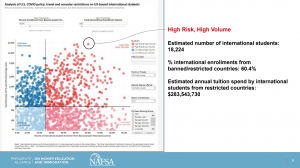 Other competitor countries such as the UK, are allowing international students to arrive provided they comply with specific testing and quarantine requirements, she added.

“International students must make their country choices and begin applying for their visas in April to ensure they can arrive in time for the beginning of the fall semester,” the letter added.

“By taking action now, you can deliver a welcoming message to current and prospective international students”

NYU’s “backup plan”, called Go Local, is “providing an opportunity for our international students stranded in their home countries to continue that NYU education at one of our global sites”, Hamilton added. The site in Shanghai has welcomed nearly 3,000 students and “many hundreds” have joined locations in Europe and other parts of the world.

“But we know well that these students want to be back in the US, they want to be on campus, and we hope very much to be welcoming them back in the fall,” Hamilton added.

“By taking action now, you can deliver a welcoming message to current and prospective international students, restore the United States as a destination of choice, and support an important source of economic activity as we recover from the Covid-19 pandemic,” the letter continued.

US policies must ensure minimal disruption for students and scholars, as well as keeping students and communities safe, to retain the country’s “position of preeminence in the wake of Covid-19”, the letter contended.

A spokesperson from the department of State explained that it is “continuously seeking ways to serve as many visa applicants around the world as possible, consistent with guidance from public health authorities”.

“Our embassies and consulates are working to resume routine visa services on a location-by-location basis as quickly as possible. However, the pandemic continues to severely impact the number of visas our posts are able to process,” they added.

The department does not “expect to able to safely return to pre-pandemic workload levels until at least mid-2021”, with health and safety of workforce and customers remaining paramount.

“Necessary health safeguards have temporarily reduced the visa processing capacity at many of our embassies and consulates, requiring them to prioritise the most urgent and mission-critical cases.”

2 Responses to Process visas and give students interview waivers, urge US unis