Posted on Sep 9, 2020 by Kerrie Kennedy
Posted in Covid-19, News, under Global.
Tagged with Coronavirus, Education at a Glance, OECD.
Bookmark the permalink.

Institutions must develop a new value proposition that addresses the needs of an international student population less willing to cross borders to study, as students are unlikely to commit large amounts of time and money for online content, a report from the OECD has warned.

While 2018 saw 5.6 million tertiary students worldwide cross a border to study – more than twice the number in 2005 – the global organisation warned that future editions of its well known report may reveal a sharp reversal of trends in international student flows.

It pointed to the safety and legal status of international students in their host country; the continuity of learning and the delivery of course material; and students’ perception of the value of their degree as under question: “all of which could potentially have dire consequences for international student mobility in the coming years”.

The 2020 edition of OECD’s Education at a Glance report analyses the education systems of the OECD’s 37 member countries as well as Argentina, Brazil, China, Costa Rica, India, Indonesia, the Russian Federation, Saudi Arabia and South Africa.

It was published alongside an analysis of the impact of Covid-19, which warns that while the crisis has affected all tertiary students, it has had a “severe impact” on the internationalisation of higher education.

The OECD’s latest data shows that while international students represent 6% of tertiary students on average across OECD countries, they represent 20% or more in countries Australia, Luxembourg and New Zealand. 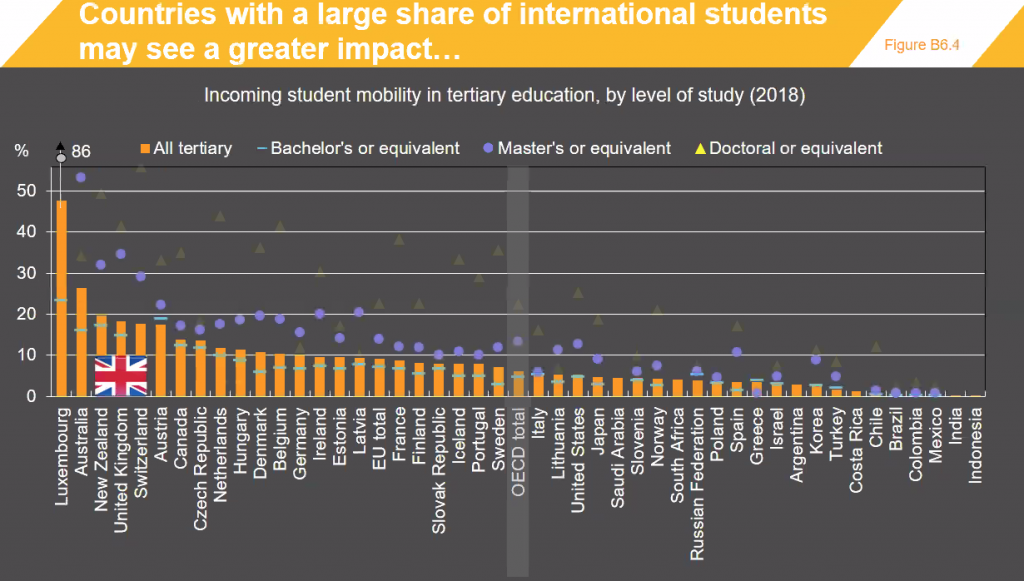 Students from Asia form the largest group of international students enrolled in tertiary education programs at all levels, totalling 57% of all mobile students across the OECD in 2018.

In total, over 30% of mobile students in OECD countries come from China and India, but more than two-thirds of this cohort is concentrated in five countries: Australia, Canada, Japan, the UK and the US.

Europe is the next largest region of origin, with European international students making up 23% of all mobile students enrolled in OECD countries.

“European students prefer to stay in Europe, accounting for 40% of mobile students enrolled in the EU23 countries,” explained the report.

“At least eight out of 10 mobile students in Austria, the Czech Republic, Denmark, the Slovak Republic and Slovenia come from other European countries.”

International student mobility is particularly high at doctoral level, according to OECD data, with one out of five students on average traveling abroad to earn their degree. 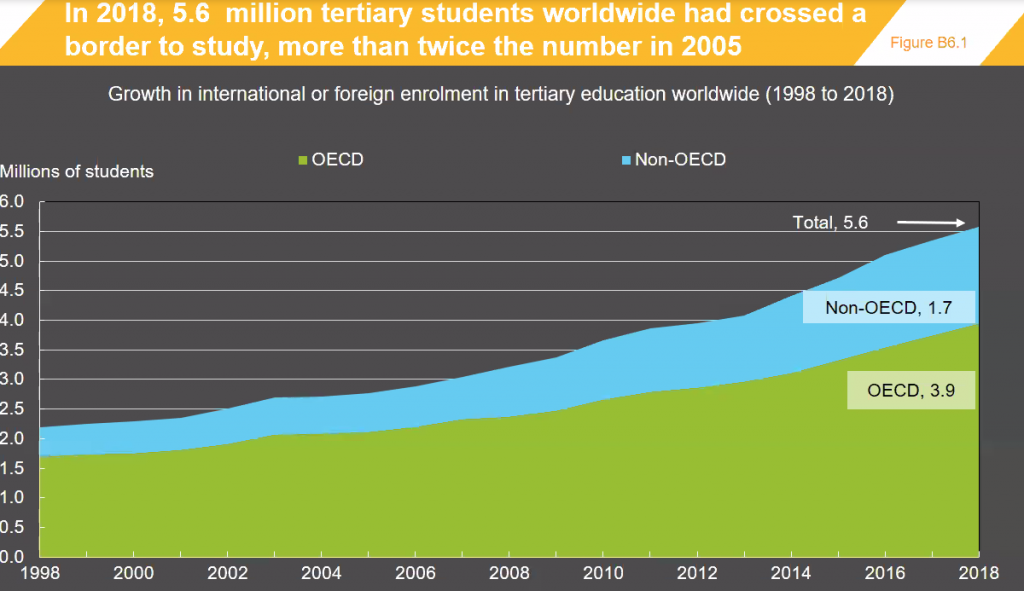 “International students were particularly badly hit at the start of the lockdown,” OECD noted, and while countries such as Canada or the UK have offered leniency around visa rules or allowed students to remain on campus, “this has not been the case everywhere”.

Speaking during a webinar, OECD director of Education and Skills Andreas Schleicher explained that universities have provided online courses to make up for having closed campuses but warned that students “are not going to spend a lot of money and a lot of their time to consume online courses”.

“They go abroad to universities to meet great people to have discussions with their professors, to work with researchers in laboratories and to experience a social life on campus. So if those things don’t work, I think universities are going to face a very hard time,” he said.

“In the short term, the online world is going to be very important. But if universities are just broadcasting knowledge, they’re going lose their value proposition.”

Schleicher said he expects we are going to see an unbundling of educational content, delivery and accreditation.

“That’s where universities have built a monopoly on. That’s where they extract lots of money from students, but content is now available universally. You’re going see a lot of private providers providing very good online learning opportunities,” he continued.

“The delivery has got to change, and the accreditation, because there’s going be lots of alternatives to recognise people’s learning experience.

“So I do think universities really need to take a hard look at this new reality,” he added.

The report explained that any decline in enrolment of international students for the next academic year would not only hit the core education services universities but will indirectly affect financial support for domestic students, as well as research and development activities.

“A decrease in the share of international students may, in turn, have severe repercussions on the funding model of some HEIs where international students pay higher tuition fees than domestic ones,” continued the report, highlighting Australia, Canada, the UK and the US as potentially suffering the greatest losses.

Furthermore, to remain relevant universities will need to “reinvent learning environments so that digitalisation expands and complements, but does not replace, student-teacher and student-student relationships”.