One in five (21.1%) students reconsidered their preferred study destinations as a result of the Covid-19 pandemic, with a majority of those turning towards Canada, a survey has indicated.

The survey also found that 53.5% of students in Nepal had been vaccinated with the Chinese Vero Cell vaccine

According to the AECC survey of 7,400+ prospective student respondents in 147 countries, of the 21.1% suggesting they had changed their preferred destination, 36% did so in favour of Canada.

India, the Philippines and Nepal were the three largest respondent countries to the survey. Students in China were not part of the survey.

The US and Australia were the two locations most common among students who said they had changed their destinations, with 27% and 15% suggesting they’d now have less of an intention to study there, respectively.

While 36% of those changing their destination favoured Canada, 21% said they’d prefer the UK and a smaller 2% indicated New Zealand.

Carried out between September 28 and October 18, the survey also found that 51.6% of student respondents had delayed their studies as a result of the pandemic, with financial pressure and closed borders the most commonly cited reasons.

“It should be disappointing for Australia to see that 15% of students have shifted their study preference to other countries,” said AECC chief commercial officer, Jake Foster.

“If the Australian government doesn’t send a clear message to students, Australians will keep missing out on the contributions of international students to our society for years to come.”

The survey also found that 53.5% of students in Nepal had been vaccinated with the Chinese Vero Cell vaccine – not currently recognised by authorities in countries including Australia, Canada, UK or the US.

The country is Australia’s third largest international student market, accounting for over 71,000 student enrolments in 2020, the AECC noted.

“It should be concerning to Australians that Nepal, such an important international student source country for us, has a majority of students that will miss out on life changing studies in because they are not vaccinated with a recognised vaccine,” Foster added.

The research also found that 77.4% of students feel negative, neutral or not sure about online studies, which AECC said highlighted the importance of on campus education. 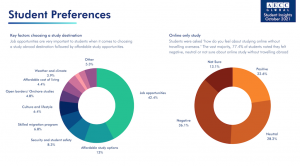 Many students that had wanted to study in Australia have not been able to put their lives on hold and chosen to study in other countries as a result of the border closures, Foster continued.

“We are almost in 2022 already, students are making study choices now and Australia is going to miss out for a third year.”

Some 49.95% indicated they had been double vaccinated, 24.07% planning to be vaccinated soon and 9.97% awaiting their second dose.

Around 40% of international students considering studies abroad were vaccinated with Coronavac (Sinovac) or Covishield (AstraZeneca/Serum Institute of India).

“Once Australia’s vaccine rollout hits the 80% double dose mark, it would be great to see a program for international students that do not have a recognised vaccine receive one on arrival when they study in Australia,” Foster added.

It is now up to countries to listen and determine what they can do to welcome the return of students, AECC chief operating officer Daryl Fong added.

“It is very positive to see that over 84.5% of students are still considering studies abroad.

“We know that students want an on campus experience with the vast majority not positive on the idea of studying entirely online.”