Posted on Sep 1, 2015 by Sara Custer
Posted in Agencies, News, under South America.
Tagged with BELTA, Brazil.
Bookmark the permalink.

The Brazilian Education and Language Travel Association this month appointed a new board of directors and president that will serve for the next three years.

The organisation also revealed its new Belta Seal that it says will serve in its primary goal of promoting Belta members to Brazilian consumers.

Attracting inbound students is also on the group’s agenda as Brazil’s profile as a study destination grows.

Speaking with The PIE News, incoming president Maura Leão, said the inauguration also marked the launch of a social media campaign to promote the organisation.

“What we have in mind is making sure that people know the difference between enrolling in a programme abroad through a Belta agent [and a non-Belta agent],” she said.

“We have launched the Belta seal which insures that the agents who are Belta members are extremely qualified have been in the market for many years and are totally experienced with exchange programmes.”

Leão is serving as president for a second time after a term from 2008-2012. Other new members of the board of directors are Marcelo Melo, financial director, Allan Mitelmão, operations director, and Neila Chammas, institutional relations director. 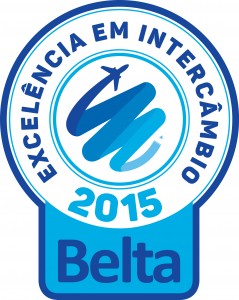 The new Belta Seal launched at the inauguration of the board of directors.

The country is in a full swing recession that has seen the real depreciate 25% this year. Leão argued that now more than ever people should be investing in education.

“The middle class has grown a lot recently so they are able to travel, but we are facing huge economical problems at the moment,” she said.  “It’s important that people invest in education because when the economy grows again you’re more prepared for it.”

One bright spot for agencies in Brazil is the growth of inbound programmes. Belta is now the government recognised organisation for inbound study in Brazil producing market intelligence reports and liaising with the media.

“We are very experienced in sending students abroad to countries that know how to promote themselves as educational destinations,” commented  Leão.

University programmes, internships and high school courses are what students from Europe, the US and the UK are attracted to in Brazil she said.

Founded in 1992, Belta has 53 agencies specialising in international education accounting for 90% of the country’s total outbound student business.

It also has 23 international associates which are universities,  high schools, networks of international schools and service providers in the sector.