Applications to programs at business schools globally have risen over the past year, a survey of 1,085 programs at 325 institutions worldwide has shown, but deferral rates for international students are triple that of deferrals from domestic students.

Some 67% of the programs surveyed by the Graduate Management Admission Council™ for its annual Application Trends Survey reported an increase in application volumes, led largely by a jump in applications for business master’s programs. In 2019, 41% replied with the same response.

“The economic uncertainty created a surge in demand among domestic candidates”

However, the total deferment rate has also climbed from 2% in 2019 to 6% in 2020. While the deferral rates for domestic students stood at 5% this year, for international students it was 15%.

The difference between domestic and international deferrals is “unsurprising” given the travel restrictions, visa constraints, and safety concerns international applicants are facing as a result of the global pandemic, GMAC™ suggested.

Overall, 24% of European, 21% US and 13% Canadian schools reported increases in applications.

Regarding international applications specifically, European institutions led the way with an absolute year-on-year increase in application at 20.8%. The US followed with a 14.7% rise, 6.5% in Canada, while applications across Asia Pacific fell by -5.9%. 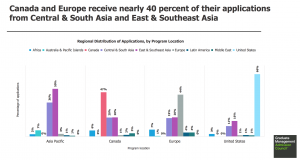 Additionally, the yield rate – the percentage of accepted students who ultimately enrolled on programs – differed significantly between international students and their domestic classmates.

The yield rate for international students in 2020 stood at 38%, while for domestic students it leaped to 59%.

“The 2020 application season was unlike any other, compelling prospective students and business schools to make decisions with highly imperfect and uncertain information,” Rahul Choudaha, director of Industry Insights & Research Communications at GMAC™ told The PIE News.

“The economic uncertainty created a surge in demand among domestic candidates, especially in the US, Western Europe, and Canada. To some extent, business schools in these countries were able to overcome the contraction in demand from prospective international students,” he continued.

“The increase in applications for many business schools worldwide in the context of pandemic-induced economic downturn again reaffirms that graduate management education is highly valued as a career accelerator in times of uncertainty.”

Overall, one in three MBA programs reported “significant growth (21% or more)” in applications in 2020 – up from just over one in 10 indicating the same in 2019.

US schools saw the most increase with 42% reporting significant growth – boosted largely by domestic applicants – while fewer schools in Asia Pacific indicated the same with 16%.

Two in five business masters programs (43%) also reported over 21% increases in applications, with schools in Canada and Europe seeing the highest growth.

In terms of international business masters programs applications, 60% of Canadian schools reported a rise of more than 21%, followed by 52% in Asia Pacific, 51% in Europe and 31% in the US.

Referring to the fall in absolute application numbers across the Asia Pacific, Choudaha noted that countries in the region differed more than other regions.

“Given the diversity of the Asia Pacific, there were higher country-level differences for this region,” he noted.

“For example, Q4 protests in Hong Kong, followed by the start of the pandemic in mainland China dampened the application volume.

Only 35% of schools in Asia Pacific reported allowing candidates to defer entry, the report noted, while in the US this climbed to 61% of schools responding the same.

In response to the pandemic, 49% of respondents globally said they had sought to recruit more domestic candidates, while only 10% said the same for international students.

In Europe – where international students made up some 80% of applications in 2020 and were “heavily skewed” toward business master’s programs – 14% of respondents indicated they were seeking to recruit more international candidates, with the lower numbers of respondents saying the same in Canada (13%), the US (8%), and Asia Pacific (7%).

The “enrolment funnel” – a term describing the relationship between applications received, acceptance rates, offers accepted and deferments – is likely to reconfigure further in 2021 “as the uncertainty of the global pandemic interacts with the new political leadership in the US,” Choudaha added.

“With specific reference to the US, we can see that prospective international students value brands and reputation even more in times of economic turbulence,” he said.

A 2019 survey found that international student interest in US business schools was continuing to decline last year.

“While the demand from international candidates has declined this year due to uncontrollable factors, this demand is likely deferred for next year for a segment of candidates and delayed for another segment,” Choudaha explained.

“The demand from international candidates is likely to recover over the medium term, with the US being one of the beneficiaries if Biden’s immigration policies deliver on a welcoming environment for global talent.”

Some 24% of international candidates in pre-election poll indicated they would be more likely to pursue graduate management education in the US if Biden were elected president, Choudaha noted.

“This means that Biden’s election could create a reversal in the direction of prospective international students who would consider studying in the US.

“This will likely intensify the competition for attracting international students, especially for destinations such as Australia, Canada, and Western Europe that benefited from the significant shifts in international demand that we’ve observed since the 2016 US presidential election.”