Posted on May 7, 2019 by Anton Crace
Posted in News, under Australasia.
Tagged with Australia, English proficiency, Four Corners.
Bookmark the permalink.

Australia’s international education sector has refuted allegations of systemic English proficiency issues in the country’s university sector, in the wake of an expose by the Australian Broadcasting Corporation’s Four Corners program.

IEAA were not approached by the program makers, it has alleged

Both the International Education Association of Australia and English Australia slammed the program, saying it undermined the integrity of the country’s higher education system and calling it restrictive in its coverage.

“The problem lies with the behaviour of some university managements”

“Yet again we’ve got this constant attack by the Four Corners program, in particular, on the international education sector,” said Phil Honeywood, chief executive of IEAA.

Speaking with The PIE News, Honeywood targeted the program’s decision to only interview Universities Australia chair Margaret Gardner, claiming neither IEAA or EA were approached for comment during its production.

Instead, the program used interviews with academics, domestic and international students, as well as stakeholders including AAERI president Ravi Singh, and Andrew Durston, director of student vetting service Probitas Quad.

“In any industry, we can always find a number of disgruntled people who work in the industry or clients of an industry,” he said.

Among areas highlighted, the program included evidence Murdoch University in Western Australia and the University of Tasmania had been waiving English proficiency requirements under the Simplified Student Visa Framework.

Introduced in 2016, the SSVF allows international students to access streamlined visa processing by, in part, only needing to satisfy the entry requirements of the institution rather than the study visa. Access is based on the risk rating of the provider and the student’s country of origin.

Many providers used the Medium of Instruction, which would deem a student proficient in English if they had studied another program, typically high school, for a set amount of time prior to entering university.

MOI would not be sufficient for a study visa, however, the Department of Home Affairs can intervene and request evidence of an English exam for any application at its discretion.

According to the program, however, some universities used unorthodox methods, such as combining the scores of separate IELTS exams to meet their requirements, and provided evidence UTAS had waived English requirements altogether to convert outstanding offers.

“As a part of our last-mile efforts to encourage acceptances for July 2018, the university will be waiving the English condition in order to assist the students who are yet to meet their English conditions,” a UTAS staff email obtained by the program read.

“In any industry, we can always find a number of disgruntled people”

The main target of the program, Murdoch University, was also alleged to have ignored the concerns of its academic staff, who said some international students, particularly from India, had limited to no English comprehension and were not meeting the academic requirements of their courses.

“This story attempts to undermine the integrity of all education providers,” he told The PIE.

“The ABC produced no evidence of any systemic failures in the regulatory approach to international education in Australia. I refute the implications that three to four cases point to a widespread failing with our visa and regulatory systems.”

The framing of the report has also come under scrutiny, with the National Tertiary Education Union saying it was ongoing funding cuts that had contributed to the behaviour in the report rather than international students.

“International students who are inappropriately enrolled and inadequately supported are the victims here, not the problem,” said NTEU national president Alison Barnes.

“The problem lies with the behaviour of some university managements.” 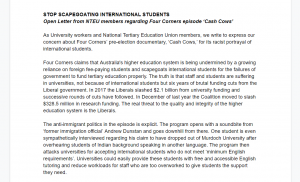 An excerpt of a letter from NTEU members.

In early 2019, the NTEU itself raised the alarm over English proficiency.

The fallout from “Cash Cows” has been swift, with UTAS announcing a review of its international admissions processes and discontinuing the use of alternate English proficiency evidence, including MOIs. MU is yet to formally respond to the program.

The PIE contacted Elise Worthington, the investigative reporter behind “Cash Cows”, to verify if IEAA or EA had been approached, but did not receive a response by time of publication.