Posted on Nov 30, 2020 by Jennifer Menchin
Posted in Government, Immigration, News, under Australasia.
Tagged with Australia.
Bookmark the permalink.

After eight months of a travel hiatus, Australia has welcomed its first international students back into the country.

About Jennifer Menchin
Jennifer Menchin is a freelance writer with a background in broadcast and print journalism, and has worked in the education and training, employment, local government, and charity sectors.

63 students arrived in Darwin on November 30, as part of the first pilot program to bring international students onshore.

The Charles Darwin University students travelled to Singapore to be connected to the chartered Singapore Airlines flight which touched down in Darwin at 7.30am local time.

“We are tasked to monitor and provide help and and support, especially mentally”

“The flight contained a mix of new and continuing students who are enrolled in a range of undergraduate, postgraduate and VET programs including law, nursing, IT, teaching, accounting and engineering,” said CDU vice chancellor Simon Maddocks.

The group – from China, Hong Kong, Japan, Vietnam and Indonesia – were required to undertake pre-departure health screening and follow the advice of the NT Chief Health Officer.

Their next 14 days of quarantine, at a government facility at Howard Springs, will be paid for by CDU.

Council of International Students Australia, the national peak student representative organisation for international students, has been working with CDU and the Northern Territory Government to make the pilot a reality.

“Our main objective is to monitor and safeguard the welfare of international students,” said CISA’s Michael Sullesta.

“We are tasked to monitor and provide help and and support, especially mentally, to the students that are in quarantine…so we’re keeping in touch with them, providing them with information about what’s going on around Darwin so that they can get a picture of what they’re going to do once they get out of quarantine.”

He said they’ll continue working with the students in coming weeks to support their transition to normal life as a student in the country.

CDU plans to host an event to welcome them on the Casuarina campus before they commence study across a range of locations, said Maddocks.

The universityhas a comprehensive support program for students during their quarantine period including daily phone calls, virtual coffee catch ups and exercise classes, along with English language and employability workshops.

Maddocks paid tribute to those who help CDU lead the nation by becoming the first university to welcome back international students to study. “International students are vitally important to CDU. It has been a tremendous effort by our staff to make this pilot program a reality.”

The students’ arrival will provide a significant boost to CDU and the Northern Territory, with international students generating $145 million to the NT’s economy in 2019 and supporting more than 600 jobs.

The pilot program is seen as an important first step in the recovery of the international education sector in Australia, with other states including South Australia still awaiting final confirmation of its pilot to proceed. 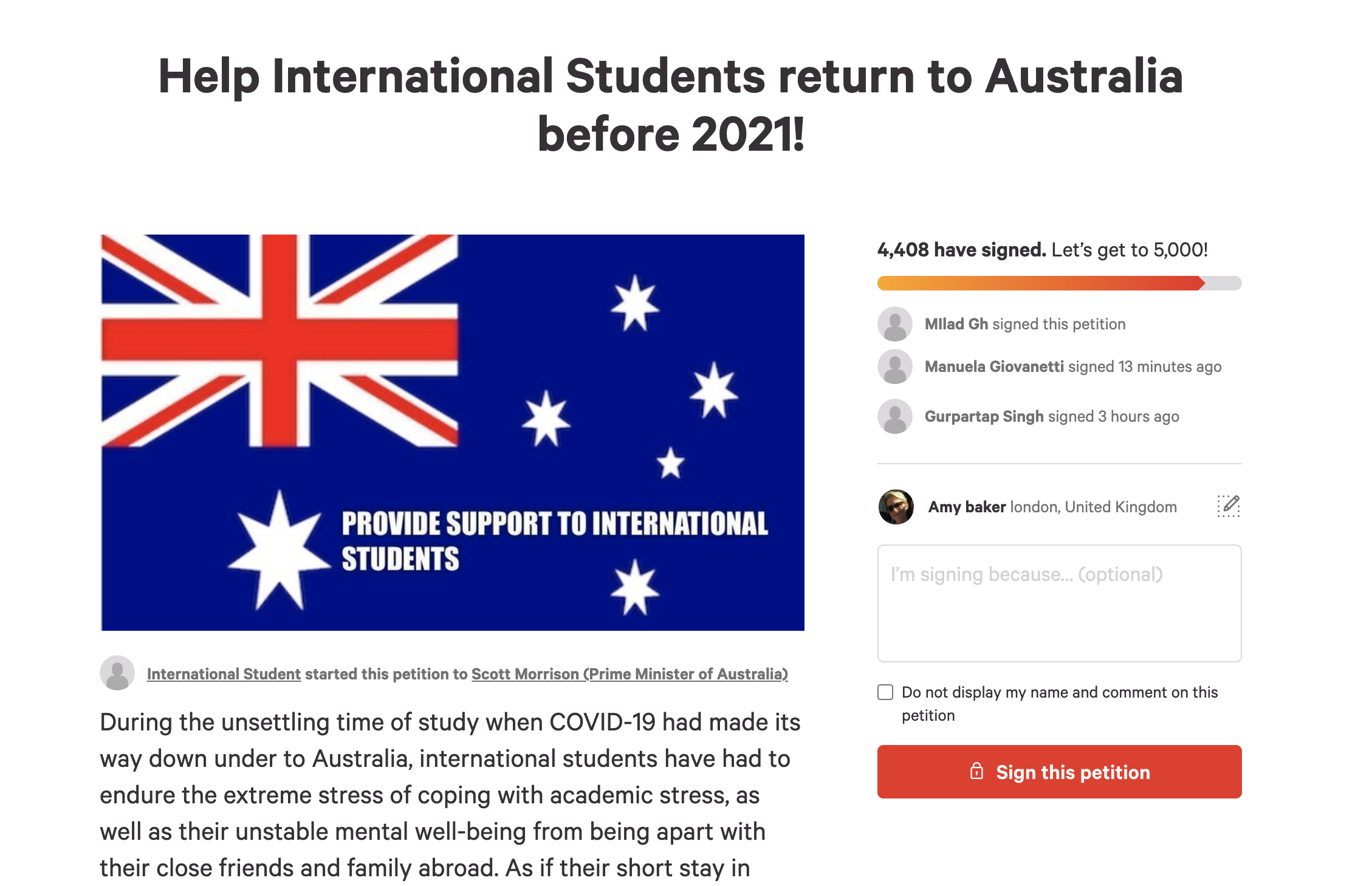 There are many students active on social media and organising petitions to enable their voice is heard around their desire to enter or return to Australia to study.

One petition has close to 5,000 signatures on Change.org – the statement from the Hong Kong-based student who started the petition includes the comment, “It is also particularly hard being surrounded by people around the world that would soon return back to their universities to continue with their education in the United Kingdom, United States of America, and Europe to name a few.”