Australian training provider TAFE Queensland has set up food banks at its campuses in a bid to help international students who may be struggling financially due to the global pandemic.

“TAFE Queensland trains more than 2,400 international students and nearly all of them are facing financial hardship”

“State-wide, TAFE Queensland trains more than 2,400 international students and nearly all of them are facing financial hardship, but providing them with food is one worry we can take off their minds,” TAFE Queensland International executive director, Janelle Chapman said.

“For the last three weeks, TAFE Queensland staff have been sourcing non-perishable goods, and I am overwhelmed and so grateful for the response we have received.”

Similar operations have been rolled out at the SkillsTech, Gold Coast, Sunshine Coast, Bundaberg and Cairns campuses.

According to the provider, students enrolled from across the world have found themselves far from their families and are without financial assistance.

The Australian Red Cross has also been named as the charity which will support temporary visa holders – including international students – with emergency relief, funded by the government.

The charity will assist with food and medicine costs when government funds are passed on to the charity. However, the Red Cross urges international students to contact their institutions to see what support they can provide.

“Many in our community are struggling to make ends meet right now, and it’s humbling that people are generously sharing what they can to support those in need,” Chapman added.

“We’ve received everything from tinned food to fresh fruit and personal care items, and our hospitality team has also been cooking meals for our international students to take away.” 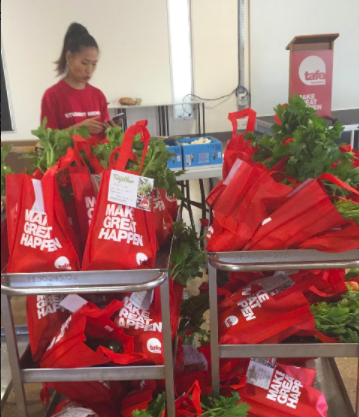 Local community groups in Brisbane such as A Touch of Compassion Inc., OzHarvest and Community Friends have also been contributing to the initiative, donating meals and groceries.

IEAA has requested the government to establish a national hardship fund to assist international students.

Meanwhile, some providers have set up funds of their own. The University of South Australia has created a $10m Student Hardship Fund (COVID-19) for all of its onshore students. Melbourne City Council has also pledged financial support for international students, according to the national press.

Minister for Training and Skills Development Shannon Fentiman called the TAFE Queensland initiative a “true example of the Queensland spirit”.

To donate, get in touch with TAFE Queensland.