Australian universities are more likely to set higher fees for international students the better their position in academic rankings, but there appears to be no corresponding link in New Zealand.

The finding stems from research conducted by education consultancy Studymove, which compared university fees in the region with positioning on the QS World University Rankings. While Australia saw a correlation between high rank and high fees, New Zealand universities appeared less likely to set their costs against performance.

“You can be a top 200 university, but if you’re not in a metropolitan area that’s going to be discounted by students”

Managing director of Studymove Keri Ramirez said over the five years his company had tracked fees, universities had noticeably changed their outlook from setting their costs against local competitors to national competitors.

“Universities are now conscious that international students are looking into a broader perspective,” he said.

“They don’t only look at a particular city, they really want to make a decision based on the national level. For that reason, they’re also looking for additional components so they can establish their pricing from a national perspective.”

Ramirez added Australian universities appeared to be setting fees to reinforce students’ perceptions of academic rankings as a mark of quality, but the same was not true for New Zealand where other considerations took precedence. 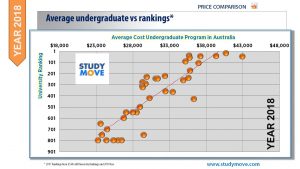 Graph of rank vs cost in Australia. Source: Studymove

“They’re not that concerned about ranking in terms of the value proposition that they’re putting to international students,” he told The PIE News.

Among the more pressing influences, location was key.

“You can be a top 200 university, but if you’re not in a metropolitan area like Auckland, that’s going to be discounted by students.”

While there was value in rankings, Ramirez warned universities could not rely on their position alone, and needed to communicate other value propositions, particularly employability for domestic and international students.

He did not anticipate the result would be similar for other countries, he concluded.

The recent findings fall in line with those from a 2016 survey conducted by the consultancy.