China’s Hanban, the agency which oversees the country’s Confucius Institutes, opened a new centre at the Pyongyang University of Foreign Studies in neighbouring North Korea in 2019, marking the reintroduction of foreign-funded language centres following the end of the British Council’s operations there two years ago.

Despite its reputation for being closed off and current sanctions, North Korea – or the DPRK, as it prefers to be known – is increasingly opening up to international educational opportunities, including hosting international students. But for the few students who do go there, it’s an experience unlike any they’d get elsewhere.

“We had classes in our own classroom building, not together with the North Korean students. Outside, they didn’t talk to us,” Hui Qi, a Chinese student who spent 193 days as an exchange student at Kim Il-Sung University, explained in a post on WeChat.

“[The North Korean students] didn’t talk to us”

According to Hui, although they were able to move freely around the city and had access to nightclubs that were off-limits to locals, most of their time was taken up by studying – lessons ran from Monday to Saturday morning – and there were no societies or clubs to join.

Students were also supervised by buddies from “good family backgrounds”, who were assigned to them by the school administration.

“They lived with us in the same building but on different floors. They help us with our studies and life but also had the purpose of keeping an eye on us.

“Every so often they switched the students and after the change, they weren’t able to keep in contact with us because they would be in danger of being accused of treason.”

Numbers on how many international students there are in North Korea are not readily available, although most attend either the Pyongyang University of Foreign Studies or Kim Il-Sung University. The latter was until this year the place of study of Alek Sigley, an Australian MA student who had written for newspapers such as The Guardian about “being the only Australian in North Korea”.

He was later detained and deported, becoming yet another in a long line of foreigners that have fallen afoul of the local authorities.

But for the adventurous, short term study has recently become a possibility, with agencies such as Young Pioneers Tours organising trips. According to DPRK managing director of YPT, Troy Collings, 16 people joined the study tour this year. 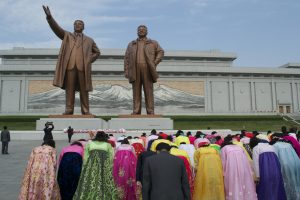 “Koreans are extremely proud of their culture, country and history. Having the opportunity to teach foreigners their language is something they take pride in,” he told The PIE.

“The study tours are still a new product though and it takes time to build trust and co-operate on deeper levels with DPRK institutions.

“Koreans are extremely proud of their culture, country and history”

“Over time we’d like to improve the access we have to the campus and spend more time engaging with local students at the universities and other schools we visit.”

The country’s leader Kim Jong-Un said in September last year that the country “lags far behind” global educational development trends and has called for greater academic cooperation with the international community.

Aside from the obvious issues such as the country’s record on human rights and controversial nuclear program, however, some worry that poor infrastructure and restricted internet access would make working with the country difficult. 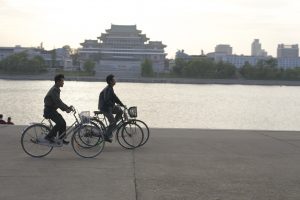 The Grand People’s Study House is a famous library in Pyongyang located on the bank of the Taedong River. Photo: Callan Quinn

That said, it was visited by three Nobel laureates (and an accompanying prince from Liechtenstein) in 2016 and several universities – including the Freie Universität Berlin – told The PIE they had signed cooperation agreements with local counterparts.

But perhaps most surprising is that North Korea began offering English-taught courses almost 10 years ago with the opening of the Pyongyang University of Science and Technology. Located on the outskirts of the capital, its unlikely founder, James Kim, is a South Korean and one-time political prisoner of the regime.

The school itself is staffed by a number of foreign volunteer teachers and its funding mainly comes from Christian groups abroad.

“At the moment we have about 25 to 30 foreign staff members, but it should be nearer to 80,” Colin McCulloch, director of external relations and professor at PUST’s college of business, told The PIE.

“The US government implemented a travel ban two years ago so Americans can’t teach with us anymore. They also make it impossible to use normal financial channels.

“Everybody basically has to bring bundles of money in cash into the country because it’s cut off from the banking system,” he added.

With several hundred students, teachers live on campus with the students, giving them a unique chance to interact with and get to know local North Koreans.

“They come in as freshmen at around 17 or 18 years of age. They’ve had a lot of information about the outside world, for example, they know what the Taj Mahal or the Eiffel Tower is and can distinguish between the Houses of Parliament and Buckingham Palace,” McCulloch added.

“But they know less about culture and values and so they very often take some time to open up to that.”

North Korean society is strictly segregated depending on the family background of an individual. When the system, known as songbun, was established in the 1970s, 27% of the population was considered part of the hostile class, 45% part of the wavering class and 28% the core (loyal) class.

According to a report by Korean security issues expert Robert Collins, those with higher songbun classification receive much greater access to education.

“PUST students basically come from the section of society where there’s nothing wrong with their background,” explained McCulloch.

“It’s not necessary that they’re from the very top. But the mother is perhaps a kindergarten headteacher and the father is a scientist in a government lab or something like that.”

Materials and courses must be vetted before being taught and some topics are off-limits. Supplying resources is also restricted.

“We don’t deliver computers, for example, because to supply computers to North Koreans from the outside world is not allowed anymore. If they acquire them somehow that’s their business,” said McCulloch.

Despite the fact that most citizens will never have the chance to go abroad, language learning isn’t being neglected either.

NK News runs a popular column in which defectors can answer questions from readers about life in North Korea. In 2015, one reader asked defector Kim Yoo-Sung, who left the country in 2005, about language education in the country. 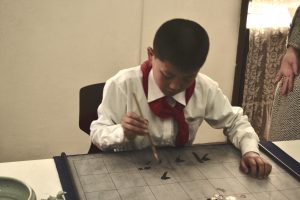 “There is an agreed-upon notion [and] widely accepted view among North Koreans that English is an international language everyone must know and be able to speak,” Kim explained.

“Most schools in North Korea teach English and Russian. Even if students are enrolled in the same year, some study English while some others study Russian.

“Since the early 2000s, as the Chinese economy has grown dramatically and its influence over North Korea has grown and grown, learning Chinese has become even more popular than English.”

“Learning Chinese has become even more popular than English”

There are those that argue that North Korea should remain politically isolated due to its human rights violations. However, those working there believe business and visits to the country should be encouraged.

“You can’t change something if you don’t interact with it,” Troy Collings said.

“Regardless of your stance on the DPRK, 70 years of sanctions and enforced isolation have delivered no discernible results, unless you count a successful nuclear and missile program, which is what the sanctions are ostensibly designed to prevent.

“The Koreans are keen to build international links and I think it should be encouraged.”