The fall out from the high-profile scandal of the Axact ‘degree mill’ in Pakistan has been highlighted again by recent reports that a huge number of working professionals in Malaysia are holding fake qualifications from unaccredited institutions and by a shocking new Al Jazeera documentary.

In fact, Kuala Lumpur-based private investigation firm Akhbar & Associates, which conducts background checks on potential hires for companies, estimated that one in twenty recruitments in Malaysia are based on bogus qualifications.

“You have medical doctors who are practising medicine without knowing medicine”

This development follows the controversy earlier this year when a number of Malaysian politicians, including deputy minister of Foreign Affairs Datuk Marzuki Yahya and former chief minister Osman Sapian, were discovered to have counterfeit qualifications.

Meanwhile, the discovery of a list of numerous Malaysian “students” holding fake degrees was featured in an Al Jazeera documentary in May.

When the firm, which purported to be ‘the world’s biggest IT company’, was raided by Pakistani authorities in 2015, the shocking discoveries included hundreds of thousands of blank degree certificates, lists of hundreds of fake universities, bank transactions numbering millions of dollars, and tens of thousands of names and contact details of customers around the world.

Reports have cited 80 plus customers from Malaysia, although the documentary suggests the actual figure is in the thousands.

Among the materials seized were hundreds of hours of phone calls, with the documentary broadcasting one where a representative of a fake university was demanding payment from a very distressed customer.

“I think fake degrees are cruel in themselves”

While the discoveries were shocking, the story of the long – but so far unsuccessful – attempt to bring meaningful legal action against Axact’s founder, Shoaib Ahmed Shaikh and his senior associates were almost equally shocking.

The case was left in ruins by the dramatic dwindling of witnesses and the resignation of the prosecution team in the face of violence and intimidation.

No evidence was found linking Shaikh or Axact to these acts, but the environment was, to say the least, inhospitable to a furtherance of the case.

Though Shaikh was sentenced in July 2018, a few months later he was given a suspended sentence, with the being case stopped on a legal technicality arising from the previous delays.

Unsurprisingly, a number of senior officials have remarked on how badly the Axact farce has reflected on Pakistan’s judicial system – including by Pakistan’s own chief justice Mian Saqib Nisari in January 2018 (“our heads hang in shame due to the scandal,” he said) and former chairman of the Higher Education Commission of Pakistan, Atta Ur Rahman who was interviewed in Al Jazeera’s documentary. 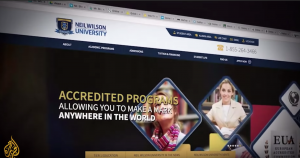 Crucially, both Ur Rahman and public prosecutor Salahuddin Gandapur – also interviewed in the documentary – stress the tremendous harm that fake degrees are doing to the value of education.

“I think fake degrees are cruel in themselves,” said Gandapur. “They’re also damaging to the education system and to society, and they have spread so much around the world.”

Meanwhile, Ur Rahman described the situation as, potentially, “a huge disaster”.

As acknowledged in the documentary, it is impossible to say how many of Axact’s customers were well-meaning and duped – by the lure of no entry requirements, no studying, no exams and a discounted ‘enrolment’ – or deliberately set out to gain a professional advantage by deceit.

What the documentary says is clear is that, across the globe, “thousands of people are employed in safety-critical jobs while holding bogus qualifications”.

One of the headline incidents of this was Myanmar’s former planning and finance minister Kyaw Win.

In 2016, Win admitted to buying his PhD qualification from the fictitious online university Brooklyn Park, one of the ‘ghosts’ institutions referenced in the documentary along with Nixon University, Belford University, MUST University (a Mexican butcher’s shop, according to the address), and Drumont University (found to be a tin shack) – just a handful of the 370 fake institutions claiming to be based in the US.

In the UK, meanwhile, a BBC report in 2018 referenced over 3,000 British-based purchasers of Axact’s fake degrees in the two years before the raid on the company.

Among these were “various NHS clinical staff, including an ophthalmologist, nurses, a psychologist, and numerous consultants.”

According to Malaysian English-language newspaper The Star, the investigation of Datuk Seri Akhbar Satar’s firm in Malaysia has found that “5% to 7% of the people that they investigated had fake degrees while 10% to 15% had degrees from unaccredited universities.”

“Many of these people with fake degrees are applying for senior management jobs and it happens in multiple industries, including banks, clinics and hospitals,” said Akhbar, who holds the position of Certified Fraud Examiners Association (Malaysia Chapter) president and former president of Transparency International Malaysia.

Akhbar went on to say that Malaysia was “one of the worst” when it came background checks for fake degrees and rarely took legal action against offenders.

By way of an official response, Malaysian Qualifications Agency chief executive officer Datuk Dr Rahmah Mohamed was quoted as saying that the Malaysian government has prioritised quality in HE and has set up accreditation systems to verify the authenticity of qualifications.

“The Malaysian government has put the quality of higher education a priority as a key factor in producing… talent to support national advancement,” she said.