This year marks the start of China’s 14th Five Year Plan which sets out the country’s vision for social and economic development. According to the outline of the plan, the development of education remains high on the agenda, with higher education and vocational and technical education being at the centre of focus.

With more than 100 million population, Shandong province sets an aim to build around 20 international schools


“To achieve quality higher education, we need to improve the level of scientific and technological innovation in universities,” said Song Demin, China’s vice minister of education, in a press conference of the State Council, in March.

“We will promote a deeper university-industry collaboration and encourage stronger connection between research and practice.”

To foster scientific and technological innovation, China’s National Centre for Educational Technology promised to put forward practical advice to guide universities to pay more attention to the quality and effectiveness of scientific research. A more comprehensive evaluation system will be established rather than focusing solely on the number of papers, awards and projects.

Under the national 14th Five-Year Plan, many provinces and cities in China recently released documents of their plans with specific development goals. Higher education is placed in the leading position in the regional innovation system and will become the backbone of technical support.

International science, technology and innovation centres will be built in Beijing, Shanghai, and the Greater Bay Area with support from the country, as stated in the five-year plan. 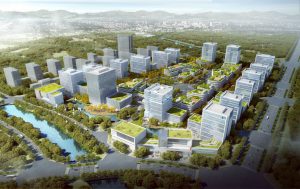 In a press conference on November 24, the People’s Government of Beijing Municipality said the centre will take the lead in exploring effective paths to build a new development pattern, with new energy and intelligent connected vehicles, intelligent manufacturing, aerospace, green energy and energy conservation being the industries at the centre of focus.

Beijing will encourage young people’s creativity and innovation through increased training. At the same time, it will promote the construction of a comprehensive innovation infrastructure by deepening the government’s science and technology management reform, it added.


Besides higher education, vocational and technical education will be promoted to help develop a productive manufacturing base and build a skill-based society, according to the experts who attended the 2021 China Education and Science Forum in September.

During the 2021 to 2025 period, four aims for vocational training have been outlined by the Ministry of Human Resources and Social Security of China. At least 3.6 million students will be enrolled in vocational education, with aims to maintain the employment rate of graduates at more than 97%.

The number of highly skilled personnel will reach more than 2 million, and at least 20 million training sessions will be given to enterprise workers.

However, one of the difficulties in promoting vocational training lies in people’s traditional views towards this path as opposed to entering university. The majority of the students study day and night for the Gaokao, China’s national college entrance examination, with the aim to be enrolled in a top university. While the students who are assigned to vocational schools tend to be viewed as failing to get good grades.

“The entrance examination for vocational education may not be so mature at the beginning,” said Sun Cheng, researcher at China’s National Institute of Education Sciences.

Sun believes substantive cooperation between training centres and enterprises should be formed through apprenticeships, joint development of teaching materials, and joint creation of talent training programs.

There have been widespread education exchanges between the UK and China with vocational education being a new opportunity for cooperation. Zhang Jin, minister counsellor for education affairs at the Chinese embassy in the UK said in a webinar in April, “China is very open to international cooperation in education at all levels, including vocational education. We are welcoming your initiatives, new ideas, and new models of partnerships to China.”

New Zealand and China have also cooperated on vocational education.

On the international level, high-standard learning institutions and programs jointly run by Chinese and overseas organisations will be encouraged, as stated in the outline of the 14th Five Year Plan.

With industry partnership at its heart, Xi’an Jiaotong-Liverpool University introduced a new education model in its Entrepreneur College (Taicang) four years ago, which precedes the country’s new guideline for deeper university-industry collaboration.

“We are living in a connected, digitalised world, which has resulted in a paradigm shift”

“We are living in a connected, digitalised world, which has resulted in a paradigm shift. Education must reflect these changes,” said Xi Youmin, executive president of XJTLU.

“By combining academic knowledge with management and entrepreneurial training, we have created a new, customised system to cultivate high-end and global-minded talents with on-the-ground experience.”

Besides transnational higher education, the development of international cooperative schools has been encouraged in a number of local guidelines for the five-year period.

As a city of the Greater Bay Area, Guangzhou plans to establish at least 50 international schools by the year of 2025 consisting of new international cooperative education institutions and the transformation of existing primary and high schools.

With more than 100 million population, Shandong province sets an aim to build around 20 international schools and expand the scale of international cooperative projects at the high school level.

As one of China’s free trade pilot zones, Hainan will build around 15 international high schools and kindergartens. It also welcomes solely internationally funded vocational colleges and is open for prestigious national and international universities to set up branches in Haikou.

When it comes to the outbound Chinese students, Amanda Wang, COO at UVIC told The PIE, “The demand for British education, including universities and schools, will only keep growing over the next five years and beyond”.

“The diplomatic relationship between US and China has made studying in US more difficult and less preferred by Chinese parents, whereas UK stays the most popular choice among all,” she added.