Posted on Jun 25, 2019 by Julian Hall
Posted in Analysis, under Global.
Tagged with citizenship, global citizens, MOOC.
Bookmark the permalink.

As a resource, global citizens are prized by employers ever-conscious of the transnational nature of business. And many educators around the world are doing their bit to try and ensure they can shape students in this fashion.

“At heart, global citizenship is about broadening the bounds of citizenship, our respect for rights and responsibilities and identification with humanity,” Rebecca McGuire-Snieckus, chair of the Global Citizenship program at Bath Spa University explains.

Bath Spa’s global citizenship course is available to all its undergraduate students and delivered in-house. Like a number of university courses in this area, it is extra-curricular and non-credit bearing, though, unlike many, there is an assessment and subsequent certification awarded.

A series of speaker events, group debates and an international placement (with eligibility for a bursary of up to £1,000) linked to each student’s degree program comprise the course content over a three-year period.

Engaging with new nationalities is key

The time spent abroad is where students inevitably feel their peak connection to the global citizen concept. Hannah Pierson, a Creative Writing and History graduate, credits her six weeks as a journalist in Ghana and time spent in Russia inspiring her to “question everything that goes on around me”.

McGuire-Snieckus acknowledges the program attracts students who, as well as wanting to broaden their outlook and networks, want to make a difference and “recognise the challenges that humanity faces transcends national boundaries”.

Other university courses underlining the appetite for ‘change’ in the global citizen catchment include a free, two-week and non-assessed UCL program, built around global problems such as disease and urbanisation and also offering to hone skills including negotiation, presentation and film editing. 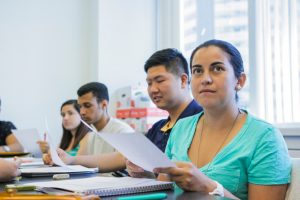 And the University of British Colombia’s ‘English for the Global Citizen’ that puts language study for foreign students in the context of the environment, cross-cultural communication, media and technology.

Meanwhile, the University of Bristol has instigated a MOOC with the online education provider Futurelearn. ‘Unleash Your Potential: Global Citizenship’ takes place over four weeks at three hours of study a week. It’s free and non-assessed, albeit with a payable upgrade option, and the course explores the very concept of global citizenship as well as getting to grips with some of its biggest issues, such as inequality, technology, climate change, nationalism and migration.

“To many, the concept of citizenship involves a community, perhaps of a town or city. How then can someone be a global citizen?”

Smith and his team soon dropped trying to define global citizenship, in favour of letting learners explore what it meant to them. “We wanted the course to help learners develop higher level skills,” Smith continues, “and to use the theme of Global Citizenship as a framework to enhance their personal development.”

Getting outside of a comfort zone

Like Smith, Aaron Slosberg, the director of student programming for transformational education tour group Where There Be Dragons, feels the definition of global citizenship is fluid.

“For some, it may mean a life mission to connect across international borders and embody a transnational identity,” he says. “For others, it could mean devoting oneself to a single home community and addressing global issues in a local context.”

He continues, “What’s important to us is that our participants are actively exploring their own unique definitions of what it means to be a ‘global citizen’ and allowing those new understandings to inform future life choices.”

Unlike the MOOC, Where There Be Dragons are all about on-site, immersive experiences, as well as forming partnerships with various businesses, schools and universities. 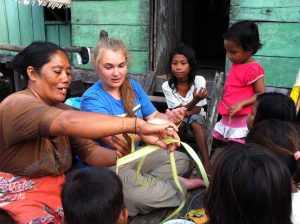 Photo: Where There Be Dragons

These partnerships – one of which is Princeton’s Bridge Year Program in China – often involve bespoke experiences crafted from within the company’s tour menu, one that includes China, Indonesia, Nepal, Madagascar, South America, and Guatemala among its destinations. Common to all course levels is an engagement with language, people and the environment.

Previous Dragons’ participants have cited numerous tangibles from their experience, other than the formal qualifications, mainly along the lines of significant personal growth, but also an awareness of the challenge of injustice, poverty and differences in religious and cultural outlook.

“The general trend,” says Slosberg, “is that study abroad, experiential learning, and immersive international programming are becoming more popular, though the increase is gradual.

“The trend in educational travel is likely a result of the new emphasis on, ‘out of the classroom’ engagement, cross-cultural competencies, and character formation through challenges.”

The activities of Where There Be Dragons were cited as innovative by Jose Carlos Hauer Santos CEO of STB, one of Brazil’s largest study travel agencies. Speaking to The PIE, he drew a comparison between them and traditional language schools that, he felt, had failed to spot an opportunity for global citizenship and aspirational learning programs.

“People are learning more and more in their country so they want different kinds of programs when they travel abroad,” Santos said.

Language schools could – and do – argue that global citizenship is at the very heart of what they do – especially where multiple language courses are offered and bearing in mind the width of their international cohorts. Nonetheless, some providers have gone one step further.

“The class dynamic is always evolving along with the students”

Canada-based ILSC Language Schools (with bases in Australia and India) offers ‘English through Global Social Responsibility’ at its Vancouver branch. The intention of the eight-week course is to increase fluency in English through engaging students in ‘controversial issues and contemporary topics’.

ILSC’s global curriculum director, Jennifer Williamson, observes that the fast-moving nature of the news is part of the attraction for some of the courses. “Our instructors respond within a classroom quickly, at the same time reflecting real-time issues that are currently happening in the world. The class dynamic is always evolving along with the students.”

ILSC’s course is well-established. While other providers are rumoured to be entering the global citizenship space, one of the most recent forays has been from Bournemouth-based Capital School of English. Its course, titled Future Success, takes participants on a journey via a series of soft and executive skill areas including Design Thinking, Project Management, Time Management and Project Planning and Presentation Skills.

The course groups, typically between 5-15 and comprising of almost as many nationalities, engage with local businesses to get a project brief and present their findings to them at the end of the course.

“More often than not, [employers] wanted people with multiple interests”

Future Success is one of the more vocational examples of a global citizenship-themed initiative, emphasising collaboration. Spencer Fordham, managing director of Capital School of English, explains that it was arrived at for a number of reasons: a distinctive offering, a desire to give students coming to them with a decent level of English something extra and tangible, and by asking employers what kind of background qualities they were looking for in their future employees.

“More often than not, [employers] wanted people with multiple interests, not just one focus, people who had worked alongside people from different interest groups,” he explains.

“So we tasked a team to look at how to build a curriculum based on future employability skills. People are crying out for something new, but the downside is that we’ve gone to an extreme so it’s about getting the right people to understand the demand.”

At a time when many nations might appear to be more focused on internal concerns – outward-facing and aware citizens are still at a premium. While this lens of education may be considered in some quarters as lofty or elitist, becoming a ‘global citizen’ looks set to become a decidedly more mainstream concern given its anecdotal impact of personal and professional development.