Posted on Mar 17, 2021 by admin
Posted in The View From, under .
Tagged with edtech, Recruitment.
Bookmark the permalink.

Tech-led recruiting developments will truly transform recruitment – not just the process, but the flows – in the same way that Amazon has redefined our purchase of goods, write three commentators on international education:

For the new data-rich intermediaries, there are huge financial returns to those players who can capture and channel students

A recent report by Cairneagle estimates that the global edtech market is worth around $180bn and – with the impetus provided by Covid –  is likely to grow at around 15% per annum to a total value of £400bn by 2025.

Clearly there are some intrinsic differences between educational sectors, but these don’t explain an almost three- fold difference.

However, before we lunge for the cheque book in these challenging times we need to think hard about where we put our money because much of this current spend will be in long term, stable or maturing areas of HE and we need to be investing to drive real innovation.

The graphic below from Cairneagle takes a look at potential areas of maturity, stability and growth where edtech will play a greater role in future. 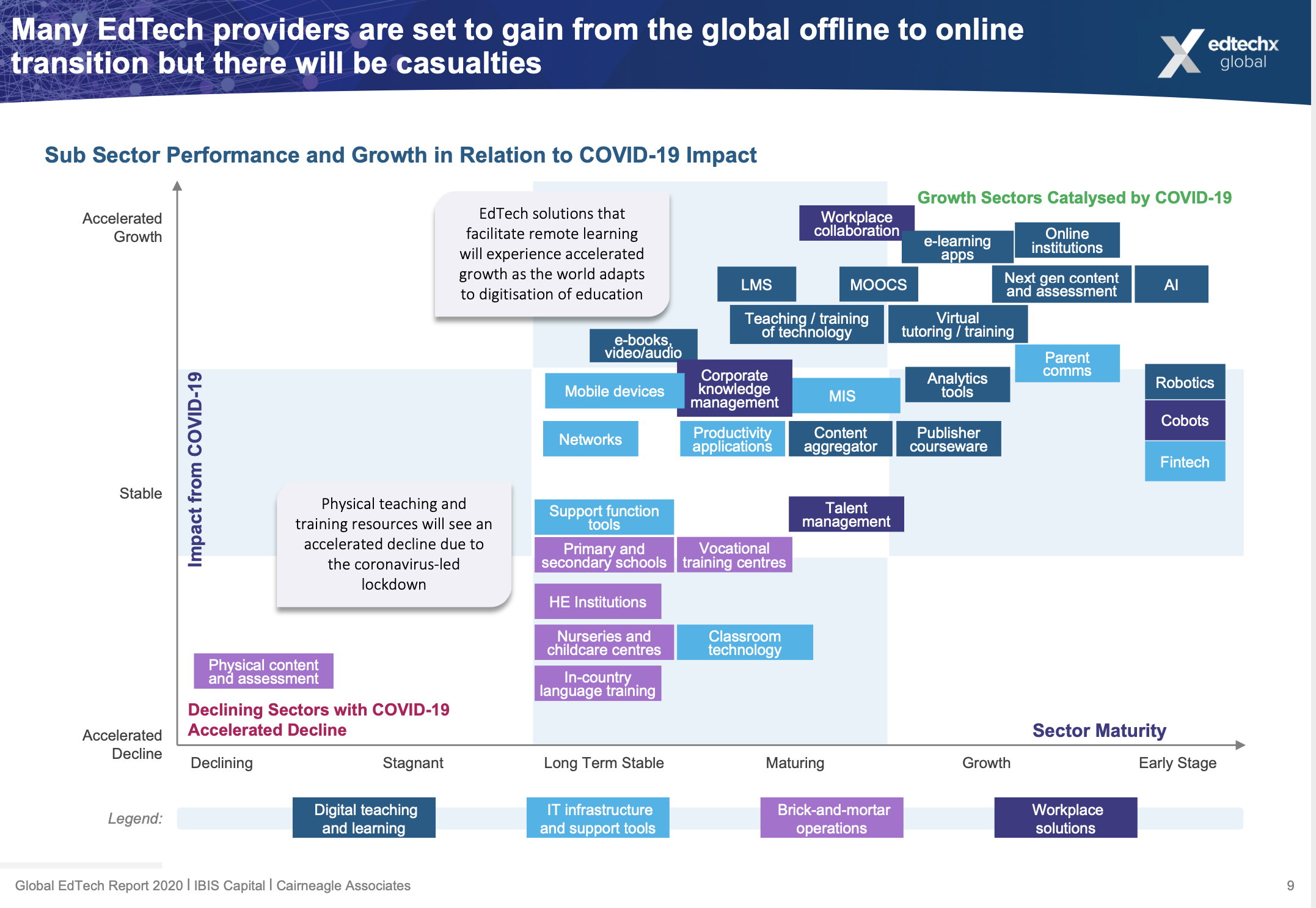 Extract of a Cairneagle report into edtech

Universities are currently rightly concerned with their core educational offer, and the lessons from moving learning and teaching online.

However, that does not justify what some might call an unhealthy obsession with ever more granular or sometimes grandiose efforts to drive innovation in the online learning experience.

Sector professionals are not craving the creation of yet another Learning Management System, or another assessment tool, especially if this happens at the expense of other areas important in the student journey.

Whilst useful, the Cairneagle analysis is very light on documenting the revolution underway in student recruitment systems and the move online of the pre-matriculation student journey.  This is where we are seeing some of the most interesting global technology driven developments – and here we still in the foothills of the mountain that we have to climb.

The attractiveness of applying technology, artificial intelligence and machine learning to the student recruitment process is clear – this is an intensely data-rich environment with a relatively small number of key variables defining students.

However it is an arena which holds the fate of many institutions’ future as they seek to grow out of their financial challenges. And for the new data-rich intermediaries, there are huge financial returns to those players who can capture and channel students and chip a bit of commission of the circa £100k paid by an overseas student at a major university.

Apply this maths to the 6m globally mobile students each year and the sums at stake are eye-watering.

ApplyBoard is one of the most often quoted examples of this new movement, and it aggressively embraces its tech-titan unicorn status.  It recently completed its third round of funding that tipped an additional CAN$75m into its coffers, bringing total capital raised to well over CAN$100 million and we will see how successfully they can extend the business model from the core India-Canada pipeline.

Whilst QS might be the dark horse that seeks to come up on the inside, IDP is a proven performer

Wells Advisory has been busily documenting this space – as part of a wider advisory focus on public-private partnerships – in respect of which it is sponsoring this category at The PIEoneer Awards later this year.

They see EduCo, with its new offering, Accelerate, as “one to watch”, because it combines a tech-savvy, AI- driven approach using predictive and descriptive algorithms, with a history of effective relationship management and a particular focus on HE.

When this is combined with an established global support function from staff across key markets including East, South East and South Asia, they see a hybrid infrastructure that potentially allows the best of both worlds.

Adventus.io is another one to watch.  Adventus had recently raised $12m in Series A funding, small beer compared to the funding raised by ApplyBoard, but it will clearly make a difference.

Edvoy and StudentApply are also ones to watch, along with the more strategic Chinese agents with a yearning to do big things and access to capital such as LiuCheng. Other runners and riders include MSM Unify, TC Global, MSM, Studyme and BridgeU. Note from our lawyers – other recruitment platforms are available!

Times Higher Education has perhaps the most developed vision for a recruitment ecosystem with what is likely to become a feature of this sector, a series of strategic tie-ups with companies that are also trying to develop a position as a principal in the market.

Its partners include Applyboard and StudyPortals, along with agents with ambition and the means to develop their own tech-driven proposition, like AECC and SI-UK.

SI-UK has also just announced a tie up with QS: QS’s experience in predictive technologies will be applied to the former’s portfolio to facilitate mining the data of over ½ million students in the QS database with a view to defining the likely ultimate destinations of students with particular application characteristics.

Whilst QS might be the dark horse that seeks to come up on the inside, IDP is a proven performer, which needs to fight off the challengers. It embraces the holy trinity – eye candy in the form of rankings and survey, channel to market through its agency business and the intelligence to leverage both through its division IDP Connect – time will tell.

This is not entirely a zero sum game – if students can be shown that there are good and affordable matches for them then it is likely that this increase in market efficiency will translate into an (even more) lively and growing market.

These tech-led recruiting developments will truly transform recruitment – not just the process, but the flows – in the same way that Amazon has redefined our purchase of goods.

The move to a more efficient and effective marketplace will undermine control of the market by those traditional players who have captured the information and attention of purchasers,  to be replaced by the power of data and access to a massively increased range of options.

To push the analogy further, perhaps we are witnessing the transition from agent as corner shop two decades ago, through to agency as supermarket a decade ago, to key aggregators providing regional dominance as Amazon has emerged in e-commerce, with the pandemic accelerating this trend further.

However, further fundamental change, post-pandemic, will also come from with the forces that have yet to be unleashed – the rise of TNE and the rise of China as a receiving as well as sending nation.

We will also see the re-emergence of government efforts to drive regional education hubs – Malaysia, of course, will be in this mix, along with Dubai and new players – and probably the end of hopes for some of those who have been trying to make this happen for a long time.

In a world of data transparency and rational choices,  informed by relentless logic supporting international education, the operational and strategic challenges for the sector are changing fast.

Post-pandemic will not be a new normal, but a new landscape where timescales will be radically concertinaed.  Higher education is more used to innovating at a steady rather than dizzying pace.  Yet, post Covid, context talking the talk will not be enough, success will come to those institutions starting now to walk the walk in rebuilding their international strategy for the post-pandemic world.

The aggregators are coming – are you afraid?! 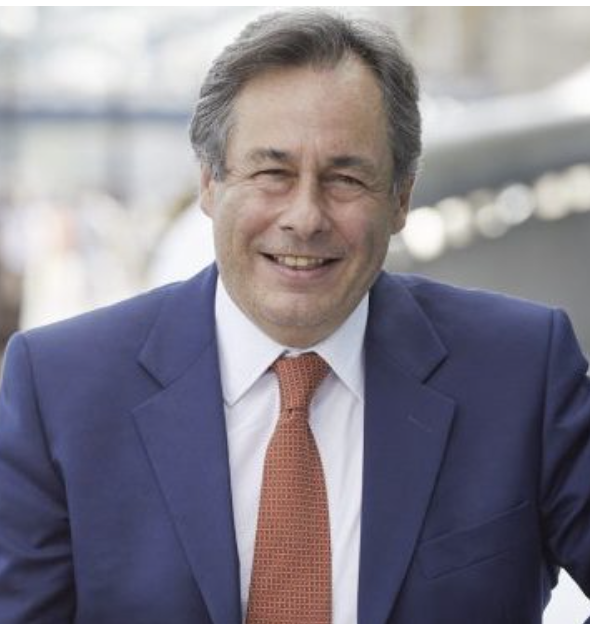 Janet Ilieva is founder and director at Education Insight and a creator of the Global Engagement Index. 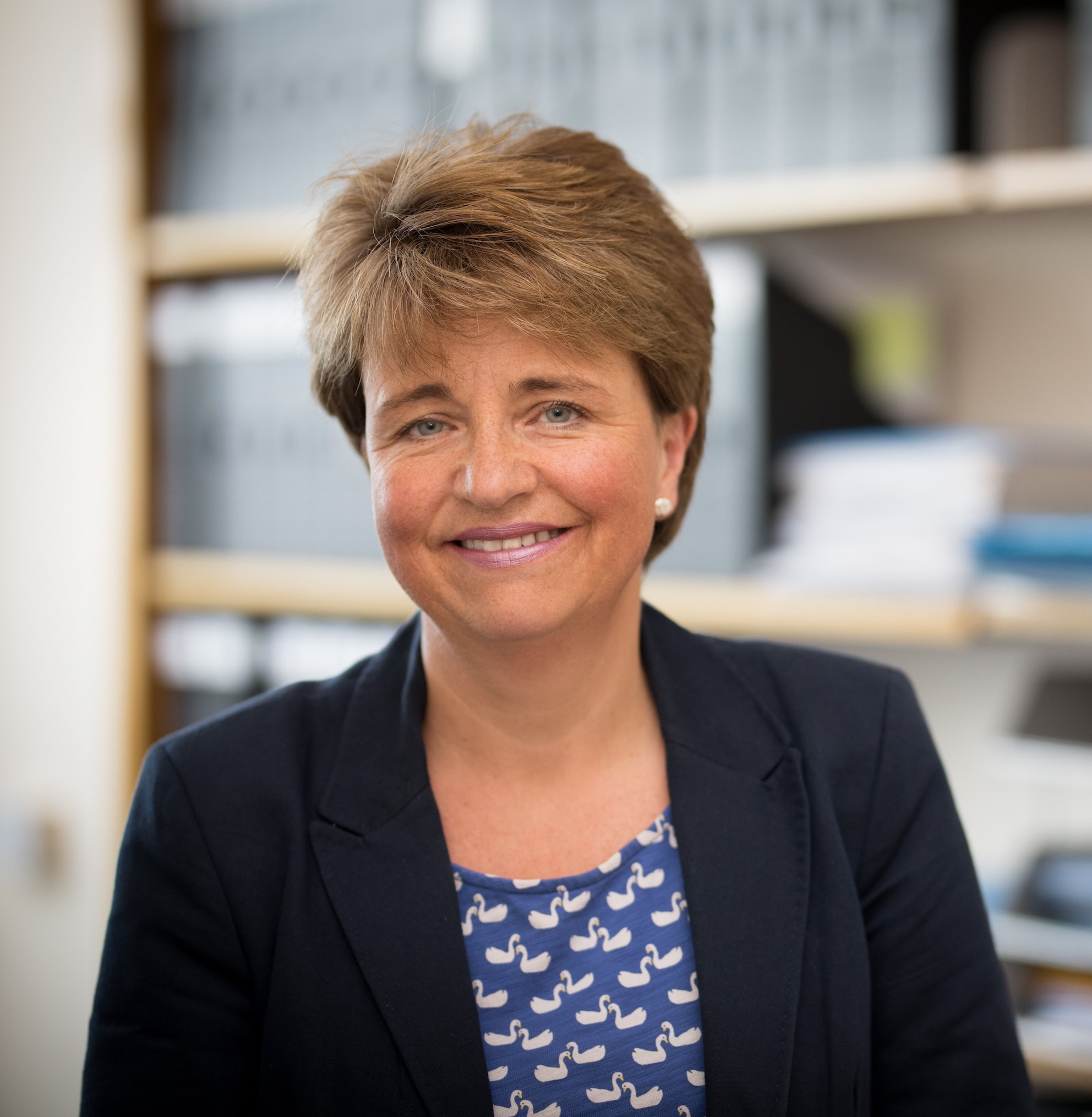 Wendy Alexander is Vice Principal, International at the University of Dundee where she leads the university’s international strategy.

13 Responses to The rise of edtech 4.0 – is a recruitment revolution coming?