Posted on Aug 4, 2020 by admin
Posted in The View From, under Global.
Tagged with #WeAreTogether, Divide Digital, social media marketing, UK.
Bookmark the permalink.

It’s undeniable that 2020 has not been kind to the key pillar of the higher education sector that is international student recruitment.

"We’re three weeks into the campaign and closing in on 7,000,000 impressions"

In 2019, Universities UK released a study which found that international students make up almost 20% of the overall student population and 35.8% of postgraduate students.

“We’re putting a positive message in front of the right individuals, across the globe”

China is then followed by India, the US, Hong Kong and Malaysia, all of which have been heavily impacted by Covid-19.

Though the above may seem like a sea of stats, these numbers serve to illustrate the undeniable fact that managing international attitudes towards the UK as a safe place to study, live and work will be crucial in 2020 and beyond.

To ensure the UK continues as one of the leading destinations for international study, it’s key that universities have access to tools that allow for mass awareness to help share the message that various health and safety measures are being put in place daily to mitigate health risks, avoid any impact on the quality of teaching but also to maintain the all-important student experience.

There are very few ways to achieve the above effectively and efficiently. Reaching millions of people internationally without running into serious financial implications is tough. However, one thing 2020 does have going for it is that social media is a more powerful platform than ever before.

Globally, over 44% of people are spending longer on social media platforms than they were pre-Covid-19. More people than ever are listening and now is the time to share your message.

We’re three weeks into the campaign and closing in on 7,000,000 impressions within our target audiences around the world.

We’ve also been driving valuable and relevant link clicks at an average cost of just 16p. 80% of those reached so far have been aged between 18-24 and have shown an interest in either studying abroad, studying in the UK or in a specific UK based university.

All of this so far has cost less than a two-week billboard campaign and there is plenty more work to do and people to reach. We’re putting a positive message in front of the right individuals, across the globe.

We’re currently looking to partner with as many UK universities as possible and have seen a great response from some institutes already. If you want to get involved and support #WeAreTogether, get in touch today. 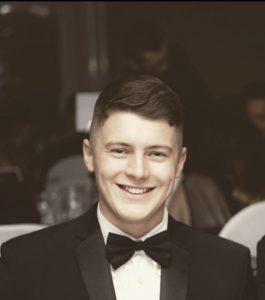 Carl Hewitt is the managing director at Hampshire based digital marketing agency Divide Digital. Carl and his business partner Reece Matthews set up the company aged 17 in 2016. Now, four years in, Divide is working with universities, governing bodies and other organisations in high education across the country.