Posted on Jul 6, 2022 by Maureen Manning
Posted in Pie Chat, under North America.
Tagged with Semester at Sea, Study abroad, US.
Bookmark the permalink.

Scott Marshall, president and CEO of Semester at Sea studied Japanese at a small private university in the 1980s and soon began what was to be the first of many study abroad experiences for him.

Recalling his time in Japan, he states, “Clearly, as study abroad can do, it suddenly takes one’s worldview from what’s down the street to what is in the world.

“It broadens one’s lens. But it’s also that willingness to take a small risk,” Marshall tells The PIE News.

After graduation, Marshall earned his doctorate, researching how trust is built within and across cultures. This soon led to an assistant professorship and additional study abroad and international teaching opportunities.

“I did not become committed to a single culture, but wanted to explore the entire world”

“I became exposed to so many different cultures. I did not become committed to a single culture, but wanted to explore the entire world and what it has to offer,” he notes.

The Semester at Sea program offers students the opportunity to earn college credits while exploring numerous countries and learning directly from and with students and faculty in each host country. This learning happens both on a floating campus, the MV World Odyssey, as well as in the field, once docked in each new port.

It was during a sabbatical in his time as a university vice provost that Marshall set sail on his first Semester at Sea voyage, accompanied by his wife and two sons. Along the journey, Marshall taught university students as they travelled to numerous ports of call, co-creating knowledge with international peers.

He refers to the program’s impact on students as “the optimal type of experience that transforms how young adults see the world – a truly deep learning experience”.

From its first voyage in 1963 as the University of the Seven Seas, over 73,000 people representing more than 1,700 institutions have joined more than 100 voyages. In total, participants have travelled to over 60 countries on Semester at Sea programs.

In 2016, Colorado State University became the new academic partner for Semester at Sea. Marshall highlights the longstanding tradition CSU has in combining classroom academics with experiential learning and asserts it is a natural fit for SAS.

Listing three central aspects of Semester at Sea programming, comparative, experiential, and international, Marshall proffers, “When you put those three elements together with the foundation of academic coursework, I am convinced something happens for young adults in their synaptic connections, where they’re testing and retesting their mental models of the world.”

Marshall indicates that this assertion is not to dismiss immersive experiences in a single location, stating, “I’m a fan of any kind of study abroad”.

“But I do think a comparative experience over three and a half months is that much more profound in terms of what a young adult will take away,” he adds, “and how it will transform, not just how they think over the next day, week, or months, but how they approach the rest of their life.”

Lori Barker is a psychology professor at California State Polytechnic University, Pomona and has taught on Semester at Sea. As a multicultural psychologist, Barker envisions her role as teaching students about “the impact culture has on every aspect of their lives – their thoughts, feelings, behaviours, and relationships”. 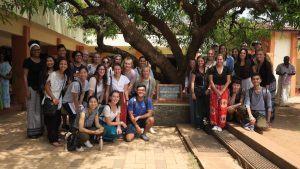 “I want them to build multicultural competence, or effectiveness interacting with others who are different from them. I know of no other program that offers this kind of immersive experience across several different countries and cultures in one semester,” Barker explains.

Barker believes experiences such as Semester at Sea help students see the world from others’ perspectives, noting, “It helps you understand that your way of seeing, doing, and experiencing things is not the only way. It builds empathy, a critical component of multicultural competence.”

World language educator and former Semester at Sea student, Samantha Radovich tells The PIE how the program’s emphasis on multicultural competence influenced her career trajectory. “SAS was the catalyst for my career in international education. I would not have specialised in world languages and cultures without the experiential learning I experienced circumnavigating the globe my junior year in college.”

Yet of all the powerful experiences Marshall hears about from students and faculty, he believes the most powerful component is the community that is built among the shipmates.

“It is the most profound part of what happens on a SAS voyage. Imagine a community of strangers in a fairly confined space who dine together, go to class together, join affinity groups, do cool activities on the ship, have moments of heartbreak, moments of exhilaration, moments of destabilisation, moments of lifting up, confidence, and elation – all as a community for three and a half months. Where else do you find that kind of experience?” he asks.

“It’s a cohesive, supportive, integrated, community effect,” Marshall implores. “And in terms of building community, confidence, and courage and elevating someone’s perspective on the world, that kind of community is foundational. That’s the key. That’s the secret sauce.”

One Response to Scott Marshall, Semester at Sea