You are here: Home » News » Research » Worldwide pathways worth $825m a year; Europe to see growth

Posted on Sep 17, 2015 by Beckie Smith
Posted in News, Research, under .
Tagged with Foundation courses, Research, StudyPortals.
Bookmark the permalink.

The English-medium foundation programme market is worth an estimated US$825m per year, according to a report from StudyPortals and Cambridge English. The UK dominates the market in terms of course numbers but continental Europe is expected to see considerable growth in the coming years, the report found.

The UK is home to nearly two thirds of foundation programmes listed, with 16% in Australasia and 12% in North America

The figures in the report – the first global overview of the pathway market – are extrapolated from datasets the company estimates to represent 70% of the market, including from its own pathway course search site, industry experts and desk-based research.

Worldwide, there were 1,192 English-medium foundation programmes listed on StudyPortals’s course search site PreparationCoursesPortal.com, with the majority in English-speaking regions.

Around half of all foundation programmes – as with international enrolments on undergraduate programmes – are in Business and Economics (32%) and Engineering and Technology (21%).

Universities and colleges account for most of the institutionally-delivered programmes, accounting for 45% of the total number, while language schools contribute just 3%.

The UK is home to nearly two thirds of all foundation programmes listed (63%), with 16% in Australasia and 12% in North America.

However, there are threats to the UK’s dominance of the pathway market. Visa regulations and government policy impacting English-medium programmes are both named in the report as major factors influencing pathway provision – areas where the UK compares unfavourably to some continental European countries, for example.

Partially for this reason but largely due to massive growth in English-taught degrees in the region, the report identifies continental Europe as a growth market for pathway courses.

The highest growth has occurred in Nordic, Baltic  and Central Western countries. The Netherlands leads in terms of sheer numbers, with 1,078 programmes, followed by Germany (1,030), Sweden (822), France (499) and Denmark (494). 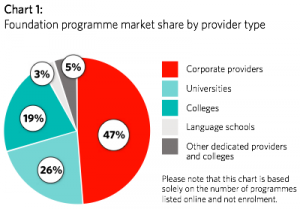 As more institutions offer these programmes, they are finding that because “students are not prepared enough, the pathway or foundation programmes are a good way to get students”, StudyPortals CEO Edwin van Rest told The PIE News.

Arnold Persoon, Study Group‘s international study centre partnership director for Europe, also pointed to the proliferation of English taught programmes in continental Europe as a reason for a boom in pathway programmes.

He noted that growth in English-taught master’s degrees, followed by undergraduate programmes, has led to higher demand in the Netherlands.

“That immediately opens up quite a significant foundation market in the Netherlands, and I think in other European countries, I don’t see a reason why the same development wouldn’t happen there at some point,” he told The PIE News.

Study Group’s centre in the Netherlands, where student enrolments have doubled in the last year, can “clearly see the impact of the UKVI regulations on growth”, he said.

“What you’re seeing now is a more diverse internationalisation trend, and that probably will also lead for more opportunities for the foundation sector”

He also noted that there is a lot more room for expansion in Europe, for example, because of its relatively low number of courses already in place.

“I think the existing markets are starting to get a bit saturated, so there’s probably going to still be growth, but it’s not like 10 years ago when growth was in double digits,” he explained.

“The UK’s having issues with visas, so it’s quite likely that the market share will go to other regions that are going to be able to grow much more because their basis is much smaller, and also have less problems with visas than in the UK,” echoed van Rest. “Visa regulations especially affect this type of mobility.”

The US is another region where the pathway market is growing rapidly.

“I think there’s also a more broader, genuine attempt to internationalise [than in the past],” said Persoon. “In the past it was highly-ranked universities with a great reputation, and all you had to do was open the gates and the applications came in.

“What you’re seeing now is a more diverse internationalisation trend, and that probably will also lead for more opportunities for the foundation sector.”

Not surprisingly, fees for foundation programmes vary according to region, and are highest in English speaking regions and where corporate providers are well-established.

• Read more about the pathway market in the current issue of The PIE Review, available for mail order or coming soon via digital link if you are a PIE Weekly subscriber.

12 Responses to Worldwide pathways worth $825m a year; Europe to see growth