Virtual education fairs are providing educators with a lifeline for student recruitment during the pandemic, according to Turkish organisation VEF Virtual Education Fairs, which has witnessed an 80% rise in demand in 2020.

The digital fair could be an important option to recruit students in a “new normal”, the company has suggested. In its sixth iteration, VEF Virtual Education Fairs welcomed thousands of prospective students in Turkey with more than 50 institutions across the world.

“Virtual fairs offer you an alternative which can be described as a ‘vaccine’ to physical fairs,” said Gökmen Özdemir, CEO of Endless Fairs and VEF general manager.

Digitalised options have become compulsory, the company noted, adding it had continued to use its virtual fair software as in-person global fairs were cancelled due to the Covid-19 pandemic.

“We have observed a 70-80% increase in demand for Virtual fairs due to the Coronavirus outbreak in the last months,” Özdemir added.

As well as saving time and money, the virtual event can be run in tandem with physical fairs, but they also provide the same experience for educators and students, VEF suggested.

Since organising its first virtual event in 2016, Özdemir explained that the company has “always emphasise[d] that this is a great alternative of the physical fairs not the competitor of it”. 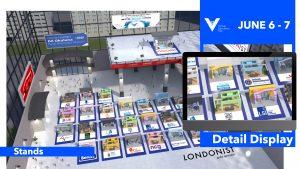 Students and parents can visit booths at the virtual event. Photo: VEF

“Now, with the new normal rules, it fits our sector perfectly,” he said.

“Students and parents visited the institutions’ booths, have gotten the chance to chat or video call with the school representatives, checked out what the schools are offering them from the uploaded brochures, catalogues and videos at the booths.”

The latest fair included seminars throughout the day and was supported by DAAD, Nuffic/Neso Study in Holland, EducationUSA, Study in Sweden and Austrade.

As a result of the increase in demand, VEF has doubled its 2020 targets, Özdemir revealed.

“Virtual fair solutions should be considered as an option that can be turned into an advantage in these negative economical conditions,” he said.

The online fairs also provide exhibitors with detailed statistics and information about their target audience,  he continued.

“In order for physical fairs to survive and expand their market, they have to be more digitalised. In this way, they can increase their trade volume.”