Posted on Aug 1, 2019 by Claudia Civinini
Posted in News, under Europe.
Tagged with statistics, UUKi.
Bookmark the permalink.

One in five students and staff members at UK universities are international, and over half of the country’s research publications are the product of international research: UUKi’s latest report paints a picture of a highly connected higher education sector with internationalisation at the centre of its success.

Via its TNE activities, the UK HE sector reached another 693,695 students

“It is now more important than ever for the sector to do what it does best – be open to the world, and innovative in internationalisation.”

The report highlights some key areas where the sector and the government should “urgently” focus their attention in order to maintain the UK’s global position, UUKi head of international engagement Lucy Shackleton told The PIE.

For example, she explained, EU funding makes up more than half of the UK’s research funding, the Erasmus+ scheme accounts for almost half of UK students’ outward mobility and almost 60% of international staff at UK universities are from the EU.

“A no-deal Brexit is one of the most serious threats we face as a sector,” she explained.

“We need urgent assurances from government that in the case that we cannot negotiate access to the Erasmus+ and Horizon 2020 schemes following a no-deal Brexit, national replacement schemes will be put in place.

“We are also seeking clarity around the transition of EU students to a future immigration system and future fees for EU students,” she added.

Beyond Brexit, Shackleton pointed to the UK’s slower rate of inbound mobility growth compared to that of its competitors and said the organisation is working closely with the government to achieve the International Education Strategy ambition of increasing the number of international students to 600,000 by 2030.

“It is crucial that a post-study work visa is introduced for international graduates,” she said.

“We are encouraged to see movement in this area, including the widely supported amendment to the immigration bill.”

Research is an area where the UK “punches above its weight”, the report stated – with 0.9% of the world population, the country produced 15.2% of the most highly cited research articles in 2015.

The international dimension of this success area is clear: about 55% of all of the UK’s publications were internationally co-authored in 2018, from 39% ten years ago.

The UK showed one of the fastest-growing rates in international research collaborations in the world, surpassed only by Australia.

The share of overseas funding has also increased, the report explained: 23% of all research funding came from abroad in 2017/18, with EU funding, which makes up well over half of all international sources, increasing 5.4% since 2016/17. 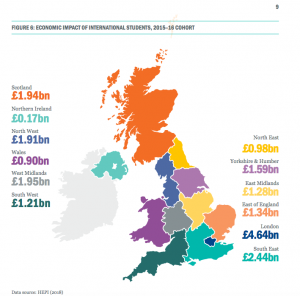 The UK remains very popular – the second study destination after the US, it saw its international recruitment pick up modestly last year, although the growth was mostly driven by non-EU students.

Via its TNE activities, the UK HE sector reached another 693,695 students in 225 countries and territories worldwide in 2017/18, with Malaysia, China, Sri Lanka, Singapore and Hong Kong figuring as the top-5 host countries.

As for outward mobility, an area UUKi has been focusing on with its Go International: Stand Out campaign, about 7.8% of UK undergrads have an international experience during their studies – but the aim is to take the figure to 13% by 2020.

Northern Ireland has already reached that target, with 13.2% of its students reporting they had an international mobility experience in the HESA Destinations of Leavers from Higher Education survey, and Scotland is very close, at 11.6%.

Meanwhile, England and Wales at 7.2% and 9.7% respectively, are still behind the target.

The top destinations for UK students in 2016/17 were France, Spain and the US.

Staff didn’t miss out on internationalisation either. In 2017/18, one in five staff, a total of 87,615, working at UK institutions were international. Of this cohort, 60% were from EU countries.

In terms of countries of origin, Italy, in particular, has been accounting for increasing numbers of university staff members to the UK, with figures rising by 50% in the past five years, surpassing those of Germany and Ireland.

The other countries in the top five were the US and China.