You are here: Home » News » To reach study abroad goals, US must look beyond traditional student

Buy-in from top-level management leading the charge to increase study abroad will be crucial if the US is going to meet its goal of doubling its outbound students by 2020 – and to broaden the diversity of the cohort going overseas.

“If you have leaders on board, you can really move mountains. If you don’t, you can spin your wheels for a long time"

This was one of the key messages from IIE‘s Generation Study Abroad Summit, which took place this week in Washington, DC.

Attendees at the second annual summit were encouraged to hear 12 GSA commitment partners have already exceeded their pledges to increase study abroad on their campuses. However, while progress is continuing apace, many challenges still lie ahead.

Diversity was the lynchpin of many conversations at the conference: that universities and colleges have a responsibility not just to boost outgoing student numbers, but also to ensure those numbers reflect the diversity of the wider student population.

“There’s a recognition that the only way we’ll double the numbers is if we get a more diverse population of students to go abroad – we’re not going to double the numbers by getting the quote-unquote ‘traditional’ student abroad,” Andrew Gordon, president of Diversity Abroad, told The PIE News.

Scholarships and grants play a key role in ensuring many underrepresented students, including those from less wealthy backgrounds and first-generation students, can study abroad. However, Gordon noted: “Funding is very important but funding is not the [only] answer.”

Targeted outreach and dedicating resources to consistent student support throughout students’ study abroad journey are also crucial, he said, while peer mentoring can also play a role. “We know that for students from diverse and underrepresented backgrounds that maybe haven’t had much international experience, there’s a different kind of support that’s going to be needed.”

There are many subject areas that are also underrepresented in study abroad, including STEM fields.

Pre-med students, for example, are sometimes discouraged from applying to study abroad because it is erroneously believed that it may prevent them from gaining admission to medical school, noted Sanford Ungar, distinguished scholar in residence at Georgetown University. 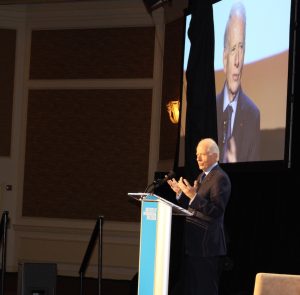 “We understand how important it is to plant the seed of study abroad earlier than junior year,” said IIE president and CEO Allan Goodman.

And representing the student point of view, Kora Nixon, a brand ambassador for Education New Zealand and one of a number of Generation Study Abroad alumni ‘voices’ in attendance, pointed out that the essays required for many scholarship applications can be off-putting for some students.

“As an engineering student I’d rather do 14 hours of math homework than write one essay,” she quipped.

Another underrepresented group in study abroad is college athletes, who are often disinclined to interrupt sporting seasons to spend time overseas.

For this reason, it was suggested that colleges should consider offering programmes that fit around athletes’ calendars. “An embedded spring break programme is really the only opportunity available to athletes,” noted Lorie Paulez, director of education abroad at Georgia Institute of Technology.

Top-down support for study abroad is necessary in order to make many of these changes, speakers noted.

“If you have leaders on board, you can really move mountains. If you don’t, you can spin your wheels for a long time,” commented James Pellow, president and CEO of CIEE.

He related how, when he had worked at a university, the institution’s board had been reticent to encourage study abroad, but were eventually convinced when they were introduced to students who had.

She noted that the university’s provost, José Cruz, is the first to have nodded to study abroad in public addresses, which has “made a tremendous difference” to cultivating students’ awareness of and enthusiasm for going overseas.

“We understand how important it is to plant the seed of study abroad earlier than junior year,” IIE’s president and CEO, Allan Goodman, told attendees during the opening plenary.

Speaking with The PIE News, Goodman said he had been challenged by a suggestion from a delegate that universities should implement a scheme to target and inform students about study abroad in their first year.

“We’re all grappling with where do you plant the seed and once you do, where do you nurture it? And maybe we’re missing the freshman year as the place we can do that,” he said.

Many first-year college students are discouraged from finding out more about study abroad opportunities as they think related services are only for older students, he noted.

Last reply was October 27, 2016
Disclaimer: All user contributions posted on this site are those of the user ONLY and NOT those of The PIE Ltd or its associated trademarks, websites and services. The PIE Ltd does not necessarily endorse, support, sanction, encourage, verify or agree with any comments, opinions or statements or other content provided by users.