The latest ICEF i-graduate Agent Barometer reveals a drop in both the UK and the US as study destinations among education agents in the last year.

49% of agents expect to send more students to Canada in the next year, while 36% expect increased interest for Australia

Apprehension among parents and students grew around the issue of study visas and the global political situation, the study reveals. The number of agents reporting study visa concerns among their clients grew from less than 60% of respondents in 2015 to 70% in 2016.

Worries around safety also rose from around 15% of respondents to 23%, the highest reported percentage in four years.

The number of concerns reported around the global political situation also grew, albeit marginally, up from 25% in 2015 to 28% in 2016. Country breakdowns, however, reveal even greater anxiety about the global political situation among students interested in going to the US or UK. Thirty-seven percent of agents reported clients had qualms about the political environment in the UK, along with 31% of agents for the US.

Other countries, however, have held their positions. Canada remained the most attractive study destination for agents, with 69% of respondents rating it “very attractive”, ahead of the US. Australia was third most popular, receiving a “very attractive” rating from 59% of agents, followed by the UK, while New Zealand was fifth, with 39% of agents giving it the highest grade.

Germany, Ireland, Switzerland, Spain and Malta followed to make up the top 10 most attractive study destinations. 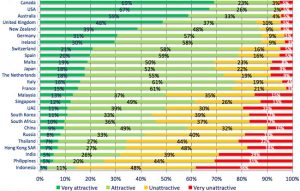 Despite the growing concerns reported by agents, their responses reflected an optimistic outlook for the next 12 months. Almost half (49%) expect to send more students to Canada in the next year, while 36% expect increased interest for Australia. For the UK, however, 29% expect to see study interest decline.

Work & study programmes are the most promising, according to respondents, 83% of whom saying they expect to send more students on these courses than they do currently. A similar number said the same for both graduate/postgraduate and undergraduate courses.

In light of the US’s increasingly accepting attitude towards using education agents, the 2016 Agent Barometer included questions targeting this market. The vast majority of the agents surveyed (93%) said they recruit for US institutions and almost a third (33%) said the main benefit of marketing US institutions is that it is the top preference among students.

To improve their recruitment to the US, however, 32% said they’d like to see more scholarships, 21% said faster application process, 17% said more frequent visits to the agency and 13% said raising commissions would help.